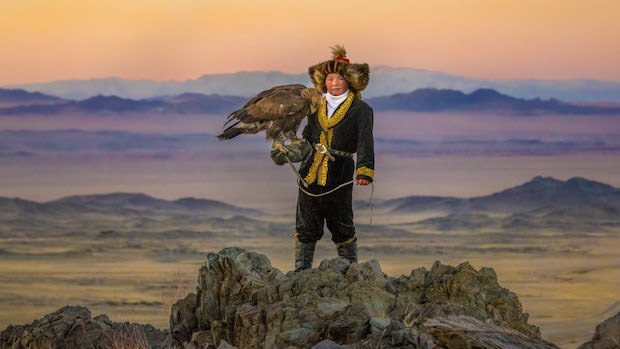 An entry in the Sundance Kids program at Sundance 2016, The Eagle Huntress tells the story of a young girl who trains to participate in the Kazakh tradition of hunting with golden eagles. The documentary charts her ascent as she breaks down gender barriers and masters her craft. Filmmaker spoke with Christopher Raymond, the co-DP on the film, about The Eagle Huntress ahead of its Sundance premiere.

Raymond: I was hired to shoot some commercial spots in Egypt with Otto, and the reason I got hired for that was because I had a lot of experience shooting around the globe, and I already had been to Mongolia on a feature film. In Egypt Otto told me about The Eagle Huntress.

Raymond: The goal was to represent the way of living and the landscapes the family live among as truthfully as possible. I usually kept very wide frames and let them interact within to show the vastness of the surroundings.

Raymond: Otto had given me some Mongolian movies. Also, I had been there before so I had a pretty good idea of what I would be shooting.

Raymond: The biggest challenge was just operating in such a remote location. We lived in a Ger (Mongolian teepee), next to the family in the middle of the Altai mountains. So charging, downloading, keeping things clean were all made to be major productions.

Filmmaker: Why did you choose the camera that you did? What lenses did you use?

Raymond: On my leg of the film I used a Canon c300. Since we were gonna be climbing up mountains and moving around this vast terrain we needed something light. I have an Alexa and would have loved to use it, but it would have been too much. Also had a 5d mark 3 for B camera shots. I also used Canon zooms and had gotten some fast primes for inside the gears and night stuff.

Raymond: Used available light as my lighting package. In the instances we could place someone I just found the best spot and direction and went with the flow of what mother nature was giving us.

Raymond: The most difficult scene was more for Aisholpan, the girl in the film, when she captures the baby eaglet that she went on to train. We had to go up to THE top of mountain, then she was lowered down by the father onto ledge to get the bird.

Raymond: I shot plain neutral files and let them enhance in post.