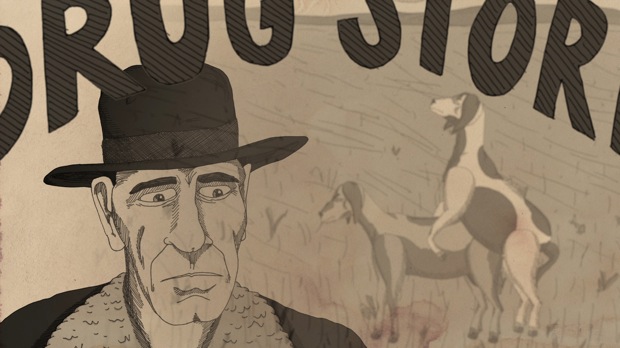 A medical doctor in name only, John R. Brinkley became famous in the ’20s and ’30s for claiming to have found an unusual cure for male impotence: all it would take was the transplantation of goat testicles into his human subjects. A hundred years removed from “discovery,” documentarian Penny Lane (whose Our Nixon was about another very larger-than-life public figure) dives into the life and times of Brinkley, a man whose entire history was based on lies and false acclaim.

Filmmaker: Your first feature documentary Our Nixon is compiled from archival footage clearly relevant to American history and politics. Did you set out for your follow-up to be a study of another eccentric (albeit less well known) American figure?

Lane: Actually, this film predated Our Nixon by about a year, and so I was already pretty deep into NUTS! by the time that film got rolling. But to answer the meat of your question, yes, I have always seen interesting parallels between the two characters and the two stories. This is not so much due to a shared “eccentricity” (although yes, they are both total weirdos!), but more due to the way I conceive of both stories as tragedies that feel particularly 20th century American to me. Both men were born of humble means around the turn of the 20th century and, through some grit and genius, rose really high and then, due to both hubris and chance, experienced spectacular falls.

Filmmaker: Had you been familiar with Brinkley’s memoir before beginning the project? How strongly did that text factor into your understanding of the man?

Lane: The book you’re referring to, which I credit the film as being “based on,” is not actually a memoir but an authorized biography written by another person named Clement Wood. I read that book pretty early on in the development stage and it clicked right away that it would be central to my film. The tone, the writing style, the version of Brinkley’s life story it offers… I found it all quite hysterical. It’s definitely written exactly the way Brinkley would have wanted it written, which makes me think Brinkley more or less just dictated it to Wood, the ostensible author.

Filmmaker: Given that the film’s title is a humorous double entendre that appropriately compliments the outlandishness of its subject, were you setting out to make a comedy of sorts?

Lane: I’ve actually thought about this a lot. I can make an argument for why NUTS! is a comedy, but I can probably make a slightly better argument for why it’s a tragedy. To get too much into either argument right now would involve way too many spoilers, though. I’m going to vote tragedy over comedy, but it’s still a pretty funny movie. But even if you want to get all classical about it, Aristotle speculated in his Poetics that comedy derives an ancient religious ritual of dancing around a giant erect phallus (“komos”). Tragedy, he says, also derives from an ancient religious ritual, a Dionysian ceremony with dancers dressed up as goats (“tragoedia,” meaning “goat-song”). So I’m just saying, if Aristotle got any of this right… one, religion was a lot more fun back then; and two, with all these erect phalluses and goats, NUTS! has some pretty deep roots in both komos and tragoedia.

Filmmaker: How important was it to present the facts accurately while at the same time realizing that, due to your leading man’s less than trustworthy claim to fame, it may ultimately have proven to be an unachievable task?

Lane: This film was an epistemological and ethical roller coaster ride. Much of the story was frankly unverifiable regardless of how much digging I was willing to do (and I did a lot). But more than that, Brinkley was a master at spinning his own tale and getting it out there (let’s call this “indie marketing of his personal brand as disrupter”), and so really almost all of the material I could get my hands on was more or less authored by him, and he’s a big-time liar. So, again, without getting into too many spoilers, the answer to your question is that yes, of course, the truth really matters, and working out what “the truth” really was is the fun of watching the film yourself!

Filmmaker: When describing the production of Nuts!, you’ve mentioned that each chapter of the film is animated by different artists. What lead to the desire to feature animation and how did you go about finding these artists? Were you looking for an extreme contrast of styles?

Lane: The desire for the animated reenactments was born of necessity. I had lots of archival and some great, wacky interviews with historians, but Brinkley wasn’t personally coming through as much as I had wanted. I wanted him to seduce you. It’s hard for a guy only seen and heard in weird, opaque, old archival stuff to be super seductive (as awesome as that archival stuff is). So along with the writer of the film, Thom Stylinski, I began to dip my toes in the soothing warm waters of writing scripted reenactments. The reenactments (which range in facticity from “taken directly from transcripts” to “I dunno, logically this seems like it could’ve or would’ve happened”) were working so well that we kept going until they ultimately filled up about half of the film’s runtime. As far as why we chose animation specifically, we thought it would be a neat way to visually underscore the fact that we’re dealing with many widely divergent versions of the truth here, because we could ask different artists to draw things in very different ways. The appearance of Brinkley changes a lot throughout the film, in a way that is (I think) subtle but also very deliberate.