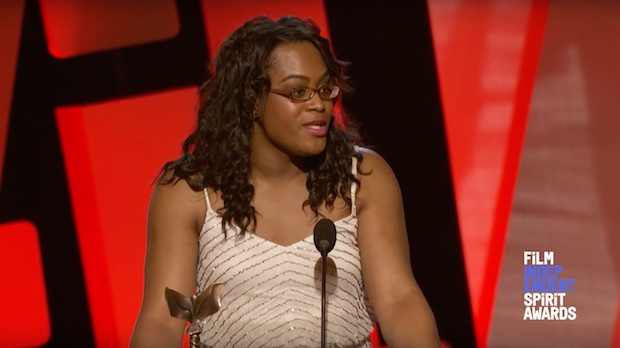 Tom McCarthy’s Spotlight, about a team of Boston journalists investigating Catholic Church pedophilia scandals in the 1980s, swept the Film Independent Spirit Awards yesterday, scoring Best Feature, Best Director, Best Screenplay, and Best Editing awards, in addition to the Robert Altman Award for Best Ensemble. As if often the case at the Spirits, the Open Roads released film was by far the highest-grossing film in all of its winning categories, sometimes to a surprising degree. On the awards circuit this year, Spotlight has been that rare frontrunner without a galvanizing lead, or even supporting, performance. (Perhaps acknowledging that fact, the Spirits and the Gothams both awarded the film their ensemble acting prizes.)

Competing against formally audacious or stylistically provocative films like Anomalisa, Tangerine and Carol, Spotlight is the most mainstream of the Spirit nominees. Still, as always, newer names or more bracing work percolated up through the other categories. Joshua Oppenheimer’s masterful The Look of Silence, his companion film to The Act of Killing, won Best Documentary.

And, after winning the Gotham’s Breakthrough Actor award, Mya Taylor won the Best Supporting Female Spirit Award — the first transgender performer to do so. In her speech, Taylor said that when she heard from director Sean Baker that he planned to shoot Tangerine on an iPhone, she thought, “This movie ain’t going to be shit.” Concluding, she said, “There is transgender talent, there is very beautiful transgender talent, and you got to get out there and put it in your next movie.”

Advantageous
Christmas, Again
Heaven Knows What
Krisha WINNER
Out of My Hand

Kiehl’s Someone to Watch Award
The 22nd annual Someone to Watch Award, sponsored by Kiehl’s Since 1851, recognizes a talented filmmaker of singular vision who has not yet received appropriate recognition. The award includes a $25,000 unrestricted grant funded by Kiehl’s Since 1851.
Chloe Zhao, Songs My Brothers Taught Me
Felix Thompson, King Jack WINNER
Robert Machoian and Rodrigo Ojeda-Beck, God Bless the Child

Truer Than Fiction
The 21st annual Truer Than Fiction Award, sponsored by LensCrafters is presented to an emerging director of non-fiction features who has not yet received significant recognition. The award includes a $25,000 unrestricted grant funded by LensCrafters.
Alex Sichel and Elizabeth Giamatti, A Woman Like Me
Elizabeth Chai Vasarhelyi, Incorruptible (WINNER)
Hemal Trivedi and Mohammed Ali Naqvi, Among the Believers