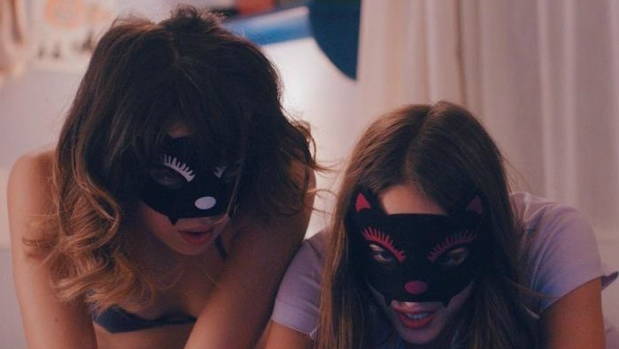 by Scott Macaulay
in Cinematographers, Filmmaking, Interviews, SXSW
on Mar 15, 2016

In his directorial debut Teenage Cocktail, director John Carchietta examines the plight of best friends  Annie (Nichole Bloom) and Jules (Fabianne Therese), who just want to get out of their small town and move to California. Nothing is off the table, including webcam modeling, which places the adventurous young women in danger. In advance of the film’s premiere at SXSW, DP Justin Kane talked about his work on the project, going deep into the technical aspects.

Kane: I received a message from John Carchietta about a year before we shot the film. He said he had found my work from an image that I posted on Instagram. I remember that being really great because at the time, I had recently graduated from AFI and had no idea how to market myself in an ocean full of emerging cinematographers. From there he sent me the script and it stood out as a passionate story about youth, love, and dangerous consequences. Once we met, our ideas and references were already syncing up so it felt right to be a part of the project from early on and, thankfully, John agreed.

Kane: There was something about Teenage Cocktail that felt familiar to me from my own experience growing up fast in a small town with not much going on. The idea of teenagers feeling invincible during high school is something very identifiable and there is a lot of room for visual language to guide us into that world from the outside. My biggest goal with this film was to make it feel organic in terms of looks and point of view, but at certain times I wanted the audience to be detached enough to see the consequences that these girls are setting up for themselves. The fun part about sneaking in bits of objectivity into the film was allowing for a little visual surrealism and discovering nuances in the characters through unconventional movements and lighting choices. In the end, we wanted to have a lot of fun capturing raw youth and we didn’t want to get tied up on too many devices to make that happen.

Kane: For Teenage Cocktail, the world of Petra Collins really stood out for us. Petra’s work is absolutely gorgeous and so natural for our story. It just feels like you’re getting thrown right back into youth with all of the angst, excitement, and confusion in tow. Music was a big guide for us in prep when we shot-listed. Our main sound sources came from bands at Burger Records and it was a bonus that we got clearance to use a lot of it in the film itself! We also dug into a lot of visual references from films like Palo Alto, Martha Marcy May Marlene, and Little Birds. Overall, I’m totally in love with the work of today’s new contemporaries like Jody Lee Lipes, Bradford Young, and Reed Morano. Their work alongside the maestros like Savides, Willis, Deakins, and Lubezki are always in my mind.

Kane: Our production challenges during the making of this film were no different than any other independent film with an ultra-low budget. We had something like 12 locations for 17 days of shooting with a very small crew. At times it seemed like a perfect storm of Murphy’s Law, but we just had to embrace everything that hit us, no matter what. It really helped me adapt, choose a solution quickly, and move on. It’s a bummer to let go of certain ideas for a film, but in the end, the audience will never miss what you’re missing, so at least make what they see great.

Kane: We shot on the Arri Alexa with a set of lightly-coated Zeiss Super Speed MkIIs. I think we wanted to shoot on Alexa from the moment John and I first met, mainly for its colorspace and latitude. We knew that film would be tough on this budget, but John also wanted the freedom to play with alternate takes and capture unplanned moments. In hindsight, I do feel like Super 16mm or 2-perf 35mm would have been amazing for this story! The Super Speeds really helped with lowering the contrast at wider stops and this film is definitely fueled on a milky/creamy look. My 1st AC Jacob Perry did wonderful work keeping us sharp during intense stylized moments, at times lensing our leads at a t/1.3 on the fly. For me these lenses are not just about affordability or speed; they also have a pleasing yet still precise older feel that you can beat up quite a bit with weird flares and lots of color.

Kane: I knew we wouldn’t get to pre-light or run with conventionally sized grip and electric packages. I also knew that we wouldn’t be able to get a crew count high enough to operate those packages. It’s a part of what made the shoot strangely fun amidst the madness. We worked family style with small setups, and we worked fast as a team in harmony. For day scenes, we embraced a lot of natural light, but we did use some HMIs to push a little more value from outside into the rooms at the school. The night scenes were mostly lit with practical lamps, LiteGear RGB LED units, or good old Mole tungsten units. I’m pretty sure that we used a medium-flood 750w par-can more than any other light! In the end, the approach was simply put — I wanted it soft, natural, and mostly beautiful, but I was always open for a touch of weirdness just to play up the excitement and trouble in the story. My good friend and gaffer, Kevin Miller, made sure to keep me honest with staying weird and I can’t thank him enough for it.

Kane: I think the most challenging scene to prep involved a big car stunt that leads to a violent pursuit. The director and I talked a lot about the most effective way we could capture a car crash without making it feel cheap or glamorized. We talked a lot about how violence should be captured in this film — we didn’t want it to be something fun to watch and we didn’t want to cover anything in overt detail. We also had one chance to capture the stunt, so just like any other expensive and dangerous auto stunt, it had to be carefully planned. We decided to bring on a second camera to serve as an alternate angle and a backup for the shot.

Kane: I wasn’t able to build LUTs before shooting, but I had a fairly good idea of how I wanted everything to come together. On set we captured in LOG-C and viewed Rec709.

Every night after shooting, I pulled stills from the dailies and mixed in some film emulation looks using VSCO Film in Lightroom. We wanted the film’s color and density to feel a bit like experimental processing. For me, high school was a time spent playing with still film and hi-8 video tapes, so applying that essence of beat up milky blacks and creamy highlights to the look of Teenage Cocktail connected me even more. Once picture locked, I reached out to Alastor Arnold at Fotokem. Al was the perfect wizard for the job and his collaboration with John and me on the film was paramount for how great it finished. He took all of our ideas and expanded them above and beyond.