Doing Things Strangely: No Place for the Living on Kickstarter 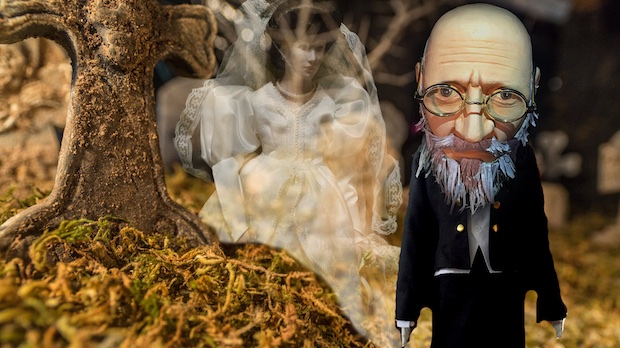 As I write this, I’m trying to raise funds for my latest film, No Place for the Living, a feature film about a German immigrant who, in 1930s Key West, spent seven years sleeping with a corpse. Not exactly the easiest film to find financing for. So why put myself though this torment? My last film had equal hurdles. It chronicled another historical oddball (albeit a slightly less disturbing one) named Walter Potter. Potter pioneered the field of anthropomorphic taxidermy (putting dead animals in human scenarios). The film wound up going far beyond my expectations, premiering at the 2015 Tribeca Film Festival and nominated for best doc at Raindance UK and Hot Springs as well as winning honors in Puebla, Mexico at Morbido. It was truly inspiring that people took to the subject matter so willingly, despite the various taboos associated with taxidermy. No Place for the Living is more ambitious. For seven years, I’ve made dozens of short films on topics ranging from pet mummification, to spirit photography, the history of the Ouija board, to my own collection of 18th-century Diableries. However, my first feature film avoided me. All the subjects I covered, I felt, were short subjects, including Potter; historical footnotes. But then I came across this story — necrophilia, mysticism, madness, romance, death and delusion. I was intoxicated by it. I knew this was the film I’d want to make — it “felt right.”

Well, whenever I watch films, I think of what I would do differently… Now, I don’t mean to say that I am critical of the films I watch, but as an exercise, I try to think of how I might have interpreted the story had I been given the chance. It’s very useful for developing filmmakers, I think. Take a classic film and try to re-imagine it in your own way (just don’t remake the classics!). Anyway, I thought, my topic is so strange. How do we take that and make it even weirder? Puppets! I grew up on those re-enactment shows of the 1980s, like Unsolved Mysteries and, my personal favorites, In Search of… and Ripley’s Believe it or Not. But while I have an affinity for the re-enactment, they always have a cheap feel about them. They’re not elevated even after 30 years. So I drew connections. What is this story really about? The subject of the story, Carl von Cosel was something of a con-artist, if not just a delusional old man. His main objective was to, by his own accounts, reanimate the corpse of his “spirit bride.” Now, at the same time, I’ve always been obsessed with puppets. They are lifeless one second, and animated the next, then quickly limp and still. It wasn’t a hard connection to make. And what a marvelous way to visualize this utterly disturbing story. Driving the narrative will be excerpts from the mad journal left behind by Cosel (read by indie film legend Richard Stanley) and expert testimony from authorities on death, Key West historians, morticians and other odd fellows. Strange story, strange techniques, strange subjects… Not the easiest pitch to investors.

So, again, why do some filmmakers like myself choose to tackle topics that are “not for polite conversation?” The obstacles making any film are great. But those obstacles are seemingly insurmountable when you’re trying to tackle taboos like necrophilia and mysticism. Well, simply put, I find it endlessly fascinating and complex. The reward is far greater when the challenge is not only intense, but a worthy fight. Since I was a young boy, I’ve been obsessed with the strange and unsettling. I’m instantly attracted to anything that defies convention or seems to say no to the universal “yes.” My films, while it may be a small audience, speak to the viewer in a way that many films cannot. Thats not to say they are better or more well produced, only to say that the people who get them, really get them. I have high hopes for No Place For The Living. I’ve spent the past two years researching, and I know the film will challenge the audience in the way the public were challenged by his case when it broke.

Visit No Place for the Living at Kickstarter.

Ronni Thomas is the filmmaker in residence at the Morbid Anatomy Museum in Brooklyn and the creator of The Midnight Archive web series. In 2014, he directed Walter Potter: The Man Who Married Kittens which received honors at Tribeca, Raindance, Hot Springs, Traverse City and Morbido. No Place For The Living will be Thomas’s first film.