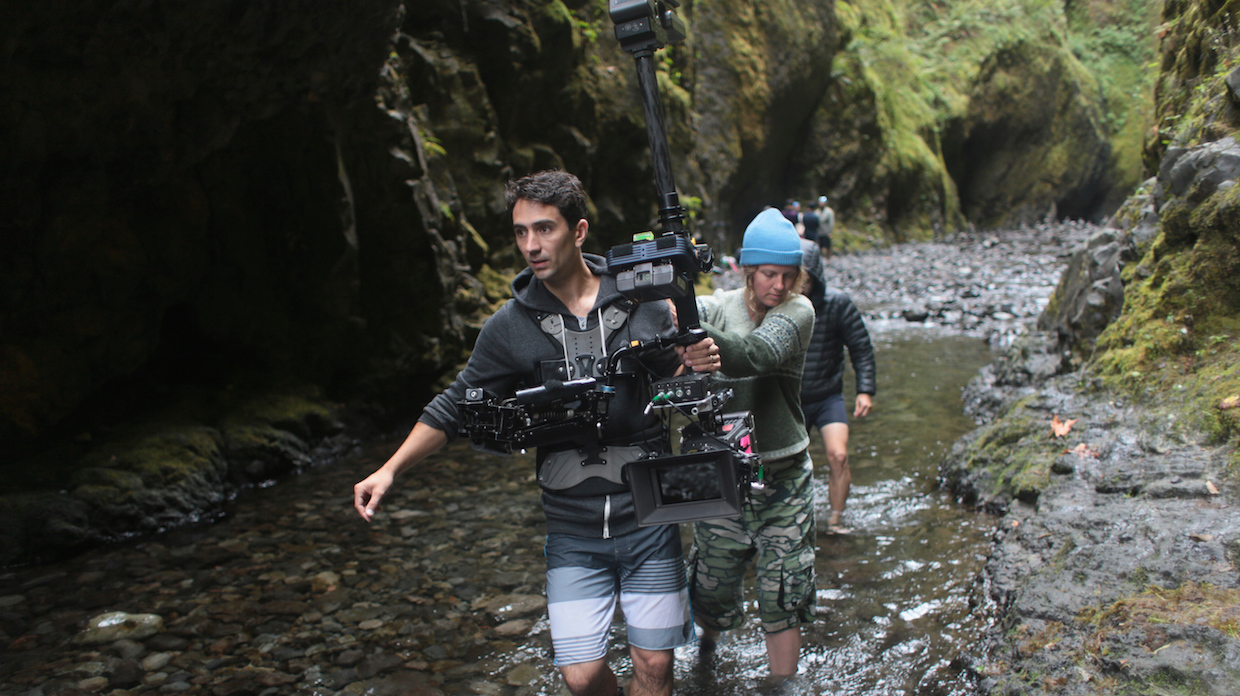 Lining up our first shot only seconds before an internal component broke on the Steadicam, sending the camera, lens and accessories plunging into the water. Miraculously we were back up and running with another body from Portland a few hours later and salvaged the day. (Photo courtesy of Sean Porter)

You probably hear stuff like this all the time: “Focus on the journey, not the destination.” Or, “It’s not where you go but how you get there.” And better yet: “Don’t get attached to outcome.” Many philosophical and motivational figures throughout the ages have identified the way or how as being arguably more significant than the what or where. These ideas are immensely applicable to filmmaking, and they have guided my philosophies about life more broadly for a long time, leading to some challenging and surprising points along the way. But is it always that simple? Does outcome not matter, at least as much? For a film? For anything?

Recently my wife and I had our second child, a baby girl. All of you readers out there with kids have been through an experience that’s hard to describe to anyone else. Only one thing is certain with any pregnancy: nothing will go as planned. And midway through this one, one of the most intense experiences in my life, I couldn’t help but acknowledge a striking, humbling and perspective-shifting correlation between two worlds that seem like they couldn’t be further apart: filmmaking and childbirth. Two experiences where the negotiation of journey and outcome are equally complex and don’t always fit kindly into our prevailing “guiding principles.” This feels like a long shot, but go with me — it’s all about the journey, right?

For some of us, the journey to childbirth is about closeness, intimacy, focusing on the internal more than the external. This is something we’ve been doing for over 300,000 years with varying levels of success, but always the same way, until recently. It’s one of the most fundamentally natural physiological events that humans experience. Trying to peel all — or at least some — of modern life away for a second to focus on the internal is challenging but has been a goal during the births of both of our children. In Western culture, childbirth is also an industry: loaded with products, services, departments, buildings, machines and an endless stream of plastic and brainwashed nonsense. So we try to get back to nature as much as we can, because we care about the journey.

We decided to use a birthing center that was right in town, one that was nationally recognized by the industry and parents alike. We were told my wife would be able to move about freely with wireless monitoring; we’d have our own spa and the freedom to go outside. We’d have our own room we could decorate, and we could control the lighting, the music and who could enter. It was as close as we could get to a home birth while still having the security of a hospital behind us.

Right off the bat things went faster and smoother than expected. We labored at home for a short time, came into the hospital for a checkup and my wife was already halfway dilated. I rushed to set up the room, dim the lights and put on some music. We labored in the tub and she was dilating at almost a centimeter an hour — it was all happening, and fast! It was going as well as we could have imagined. Until it didn’t. She stopped around seven centimeters and for hours labored without change. We were suddenly faced with some hard decisions — get the baby out now via cesarean or use Pitocin to strengthen the contractions. The extra intensity of the contractions would have been too much considering we’d been in active labor over 12 hours at that point, so we made the difficult choice to have an epidural, hoping that a natural birth was still in the cards. All of a sudden, at about 3:30 a.m., the lights came on, loads of people came in, sensors and IVs were added and a needle was placed into her spine. Our freedom was gone. The cozy room was gone. Our internal, natural space suddenly shattered against a barrage of Western medicine and technology. From there on out the journey continued to jostle us around like a rollercoaster nearly coming off the rails, and, in the 11th hour (well, actually the 24th), we finally had to call it and Stella Quinn was born via cesarean, in the center of a large, bright, mechanized room swirling with a dozen technicians doing the impossible — something they do daily — and talking among themselves like they were standing around the craft services table.

So what does this have to do with filmmaking?

You are a director. You have a vision for a film — it’s going to be beautiful, natural, simple. It’s going to speak to the human condition in a poetic and meaningful way. It’s critical the actors are unobstructed — that they can flow and move with their emotions. You don’t want marks. You don’t want lights. You want the camera to effortlessly move about with the cast and find the moments in a completely organic way. Your filmmaking will be free of the system that can so often hinder and hurt what it so adamantly and assuredly tries to support.

Your producer is totally on board. The script is great. You found amazing locations that have incredible natural light. You picked your DP because they get it. The cast is fantastic and everyone feels like you are really doing something special, something different. Everything is moving along smoothly, according to plan…

Your first location is a beautiful old house, with large windows that overlook the countryside. The scene takes place at sunset. Your AD knows what’s at stake, and everyone has been rehearsing since 10 a.m. Now the light is starting to come around, everyone’s in their places. The camera rolls, and the scene starts to sing. Midway through you see the operator twitch, hesitate — something isn’t right. The camera locked up. It drops from her shoulder, and a team of ACs rush in, flashlights out. The actors stop and look to you for some sort of confirmation of what’s going on. You look to the DP, who looks back at you with distress. The light is going to fade, and the ACs need to swap camera bodies.

Luckily this isn’t your producer’s first rodeo. You have the insurance camera, and you agreed to bring on an experienced crew for difficult moments. The DP approaches and starts to make recommendations: she can bring out some lights and fake the sunset — it’s already been prepped — but you’ll have to change the angle and focus on the details of the house instead of the countryside. It’s not what you want, but you’re already feeling that knot in your stomach — you’re losing your grasp, and you just want to keep moving. You say, “Okay.” Suddenly the house lights come up. The actors are sent away, the G&E team come in, and you overhear one talking about how excited they are that craft services had kombucha.

Now I’m picking on my department, but a story like this happens to directors all the time. Maybe it’s a missing prop, or a lav that won’t cooperate. There are so many things that can go wrong in that moment where nothing can go wrong. And sometimes no amount of prep or childbirth classes can change the outcome.

What happens then? Where’s the great revelation in this journey? You will compromise everything, and all of a sudden outcome is everything: how can you salvage this moment? That takes a confident director and a great team. You have to be ready to trust those people you surrounded yourself with — not for the moments where everything is going according to plan, but for the moments when everything falls apart. We had to trust in our OB and the anesthesiologist and the surgeon and the nurses that all came together and salvaged that moment. In the end, you will walk away with something (for us, a healthy mom and baby!). And you will be attached to it in ways you couldn’t have imagined.

“Even if you fall on your face you’re still moving forward.” ~ Victor Kiam