Act Naturally: Working with Caveh Zahedi on the Web Series, The Show about the Show 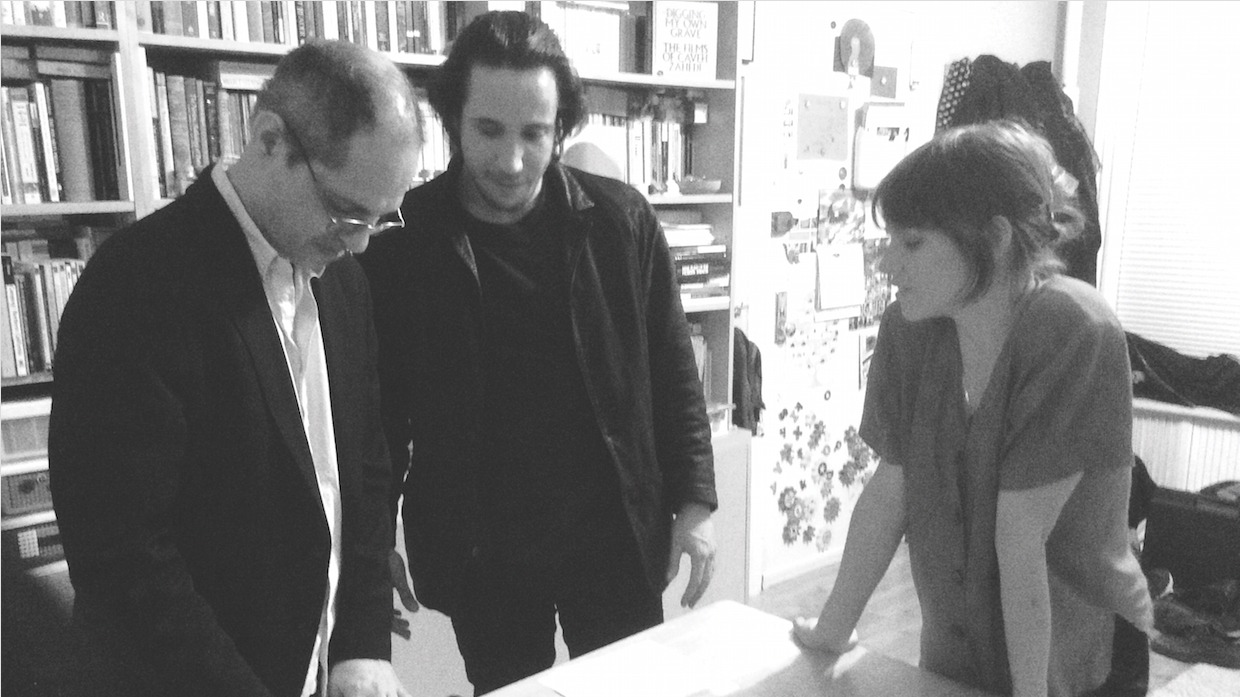 Caveh Zahedi played the same edit over and over, one too many times. “I think I’m gonna go, man,” I grumbled. I’d reached my breaking point. The idea of a rough cut that gets whittled down doesn’t work for Zahedi. He needs to sand, polish and lacquer each piece of wood before deciding if he even wants to use that wood. Basically, he fine-cuts each take. Why, I’ve asked countless times, can’t we just choose the best take and work it in? His answer: how can we tell what the best take is unless we see them all working at their best in the timeline? Maybe it bothers me because it makes sense.

I got up off my chair.

Mandy, Zahedi’s wife, noticed I was upset. “What do you need right now?” she asked.

“I’m not of much help if I keep fighting him on the way he’s doing this.”

“Okay, but what do you need?” A heartfelt question. Maybe that’s all I needed. I sat back down. I was just being a big baby. We began to work again. About a minute later Zahedi stopped, turned to me and said, as if addressing a betrayal, “You were really gonna walk out?”

We were working on episode 4 of Zahedi’s new series for BRIC TV, The Show about the Show, a self-reflexive TV show about its own making (which was its original title). Basically, for every episode, Zahedi recreates whatever he deems interesting that happened during the making of the last episode. Contributors to the show play themselves whenever possible and reenact their real-life interactions with Zahedi. Like his past work — features such as I Am a Sex Addict and The Sheik and I — he is once again only beholden to the truth, to what actually happened. But what if nothing really happens? As Zahedi says in the first episode, “Something always happens.”

The hard part is presenting what happens in a cohesive and engaging way without embellishing reality. Every cut is labored over by Zahedi himself, aided by a rotating bevy of assistant editors, like myself, who help him give birth to each episode. More midwifery than editing, we’re employed as sounding boards for his editing decisions, but he’s the only one who holds the blade. Whenever Zahedi and his assistant find themselves truly baffled by an edit or by the similarity in takes, he calls out for the head midwife. “Mandy!” Valued for her natural ability to separate wheat from chaff, she possesses the only opinion Zahedi holds above his own. Her propensity to remain objective in the face of some deeply personal content is preternatural. That said, she’s had years of practice.

Zahedi has spent his career putting his life, warts especially, in front of the camera. If he ever was squeamish about it, those days are gone. No longer even aware of what causes squeamishness, he expected cast and crew to reenact private moments without qualms. There have been qualms. Halfway through the first season, the story arc of The Show about the Show has leaned heavily toward Zahedi’s relationship with actress Eleonore Hendricks and her boyfriend Sam Stillman. Zahedi has asked them to reenact some personal, intense and pretty embarrassing moments. And, despite being great actors, this isn’t quite acting; it’s reenacting. Unlike a reality show, where moments from one’s life are “captured,” the moments from these people’s lives are first filtered through Zahedi and become, essentially, his version of their moment. Then they have to play that moment the way Zahedi wants it played, which is the way he remembers it. Zahedi calls this “the truth,” but a slightly more accurate description might be “his truth.”

The cast and crew have found themselves in awkward and unusual situations as Zahedi has attempted to capture this truth. Zahedi developed a real-life short-lived crush on Hendricks, which was depicted in episode 3. When he told his wife about it, she recovered pretty quickly and didn’t want things to be awkward with Hendricks. She suggested inviting her to their home to smooth things over. When Zahedi and Mandy filmed the reenactment of this moment, Hendricks and Stillman were in the room, waiting to film their scenes. Hendricks sat off to the side and watched Mandy (the character) say to Zahedi (the character), “We should invite Eleonore over and normalize things,” over and over again. “I feel like I’m on acid,” Hendricks whispered.

“I’m not sure why my character is interesting if he has no redemption,” I overheard Stillman say to Hendricks later in the day. “Sam, there must be a reason he’s doing this, just trust him,” she responded. Stillman was concerned about Zahedi’s depiction of him from the start. He was being used as a potentially explosive, unpredictable, impending troublemaker. From Zahedi’s point of view, it’s not that this is a totally false depiction of Stillman; it’s just a drastic oversimplification. Obviously, if Stillman were simply an actor, he wouldn’t have much cause for issue with his character in the show. In fact, most actors would love to sink their teeth into that role. But for Stillman this isn’t a role. He constantly kicks himself for letting Zahedi use his real name. He would be less bothered by the way Zahedi paints his character if he were called something else. But playing Zahedi ’s version of Sam Stillman drives him crazy. Often on set, Stillman pulls Zahedi away to have long complex, and often heated discussions about how he’s being depicted in the show. This doesn’t resemble the way an actor talks to a director about changing, expanding or deepening his part. This is a wholly unique conversation. Much more is at stake for this “actor.” But those worries seem to elude Zahedi. It’s hard to blame him. For decades he has used his own real-life character for dramatic purposes.

Most of the time, Zahedi doesn’t tell the reenactors what they will be reenacting until they are about to do it. If asked in advance, he’s purposefully vague. It’s not just a directing choice to keep spontaneity fresh, it’s also because if they have an issue with what he asks them to do, he wants that issue captured on film. Zahedi never forces anyone to do anything, but when the camera is there and everyone is ready, it’s a troubling brand of peer pressure that’s applied. In the beginning, I felt very protective of the cast and gave Zahedi a hard time for it. But the unexpected happened. When they joined with Zahedi in his adherence to honesty and the staged expression of it, walls between them were knocked down very quickly. This shined a light on something I wasn’t totally aware of: an undetectable, protective sheen of polite bullshit separates people. It forms out of worries of being misconstrued, misunderstood, disliked. We constantly bump up against it in our interactions and it prevents us from connecting on a deep level. Zahedi, through the making of this show, has not only broken through the bullshit wall between the people reenacting moments from their lives, he’s created a place where it can’t easily return. Cast and crew who fought against the shattering of this facade are now energized by its disappearance. It has, in a real way, set them free.

But just because the cast has, for the most part, committed to radical honesty doesn’t mean that the presentation of that honesty is easy. The “acting” part of “reenacting” is still the real challenge. Paramount to Zahedi is the authenticity of the performance. He won’t move on unless it is natural, stripped of stunted artifice and calculation. As an actor, in general, I suffer from “over-think.” Having to “play” myself in the show has exacerbated this condition. In one of my scenes that was ultimately cut from episode 3, I had to reenact a moment at the BRIC studio when I got mad at Zahedi for something technical regarding the recording of sound. My lines were almost exactly what I remember saying to him in real life, in that very room, a few weeks prior. Take one — I uttered my first line. Zahedi stopped me. “I’m not buying it,” he said. I could’ve argued — “But this is MY line, that I actually said to you. How could you not be buying it? The character is me. This happened!” But no, I learned something about acting that day. You can embody the character fully, literally be the character, you can “write” the line, know exactly where it comes from, know its entire backstory, and still act badly. I eventually nailed it. Take 51.

Since then, Zahedi has called me “Mr. One Thousand Takes” and has kept me from the big time. But I have a plan to get him to expand my part on the show. Conflict, real-life conflict, something Zahedi will want to reenact. Maybe that’s what my editing tantrum was — a half-real yet limp attempt at staging some dramatic conflict. But I blew it. I just couldn’t commit to the scene. It’s not in my character.