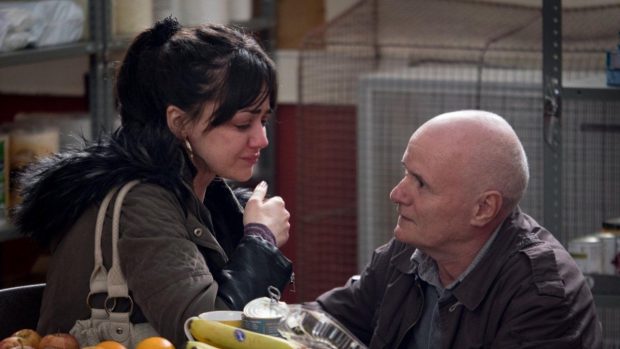 One of the more surprising Cannes awards ceremonies has just ended, with Ken Loach becoming a two-time Palme d’Or winner with his I, Daniel Blake, about a 59-year-old carpenter battling England’s health care system following a heart attack, winning the top prize. (The director’s The Wind that Swept the Barley won the Palme in 2006.) I, Daniel Blake, while not one of the buzzier titles in the Competition, was generally well received; the same can’t be said for the jury’s Grand Prix, awarded to Xavier Dolan’s It’s Only the End of the World. Variety’s Guy Lodge tweeted, “Giving Xavier Dolan the Grand Prix is the worst Cannes jury decision in a very, very long time. (Read Blake Williams’ largely negative but certainly not scathing review here at Filmmaker.)

Loach, who, at his press conference, said he was against the so-called Brexit — England’s upcoming vote to leave the European Union — because EU breakup would lead to many countries tilting right, added more today when accepting the award: ““When there is despair, the people from the far right take advantage. We must say that another world is possible and necessary.”

The Best Director prize was shared by Olivier Assayas, for his post-modern, haunting-by-text-message thriller, Personal Shopper (reviewed here), and Cristian Mungiu for Graduation, his bleak Romanian national portrait wrapped up in a story about a doctor trying to help his daughter, the recent victim of an attack, pass her national final exams.

Actor and Actress prizes went to Shahab Hosseini and Jaclyn Jose for The Salesman and Ma ‘Rosa, respectively, with The Salesman also winning the Screenplay Award for its writer/director Asghar Farhadi.

The Jury Prize was given to Andrea Arnold’s American Honey, the U.K. director’s exuberant and lyrical U.S.-shot road movie about a troupe of homeless teens selling magazines across the Midwestern heartland. Arnold has received the Jury Prize twice before, for Red Road and Fish Tank.

Shut out by George Miller’s jury was a film many thought was a frontrunner for one of the Competition awards, Toni Erdmann (otherwise known as “the German comedy”). It received the FIPRESCI Critic’s Prize for Best Feature in the Competition.

Grand Prix: “It’s Only the End of the World” (Xavier Dolan, Canada-France)

Ecumenical Jury Prize: “It’s Only the End of the World” (Xavier Dolan, Canada-France)

Un Certain Regard Prize: “The Happiest Day in the Life of Olli Mäki” (Juho Kuosmanen, Finland)

Society of Dramatic Authors and Composers Prize: “The Together Project” (Solveig Anspach)