How We Raised $27,000 on Kickstarter for a Film About Black Teen Identity, First Love and Islam 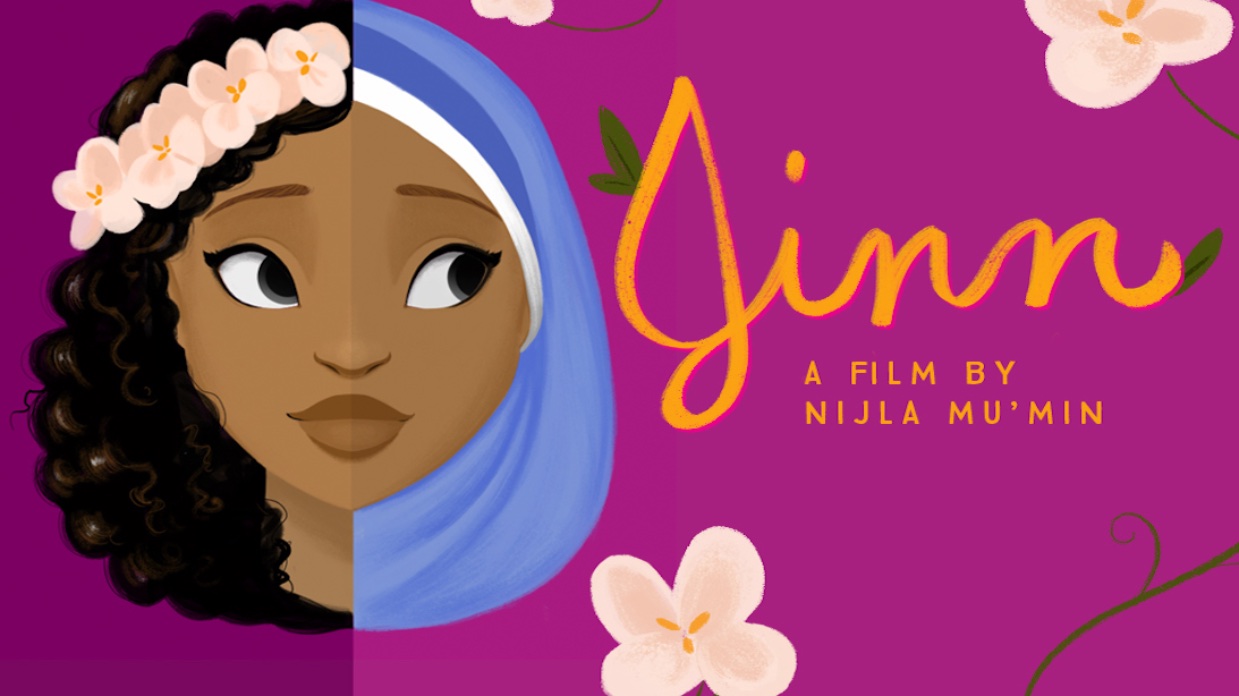 My name is Nijla Mu’min and I’m an award-winning writer/filmmaker from the East Bay Area. In March, I launched a Kickstarter campaign to raise $25,000 for my first feature film, Jinn. Jinn is a coming-of-age drama about a teenage black girl named Summer whose life is turned upside down when her mother abruptly converts to Islam and becomes a different person, prompting Summer to reevaluate her life and identity. It’s a fun, fresh exploration of millennial culture, Islam, and first love.

Since the campaign ended, fellow independent filmmakers and colleagues have reached out to me for insight on how to run a successful crowdfunding campaign. While the advice listed below is specific to my experience, it can apply to any filmmaker trying to engage with supporters and reach their funding goal. A crowdfunding campaign is hard, fun, and might seem impossible, but these tips can make the ride a little smoother. I hope.

What better time to launch our campaign than in the midst of the “Oscars So White” debate? Folks were up in arms about the lack of nominees of color and the lack of opportunities and resources for emerging filmmakers. I even wrote a personal essay about it. Our campaign was, in some way, a direct response to people’s frustrations. We were making something different, a film about a black teen girl who dances, love churros and is thrust into Islam. The same “Islam” that Donald Trump was trying to criminalize. We used this to help propel our narrative and show how timely our film was.

We received an outpouring of support from the Muslim and non-Muslim communities alike. Many people reached out, saying that they’d grown up in Muslim or interreligious households like me and connected with this story. It was amazing.

Think of ways to align your campaign with a larger cause, debate or discussion. What current events relate to the project? How can you insert your project into the discussion? You should use your social media pages on Facebook and Twitter to post relevant news about the larger issues your film addresses, coupled with film updates.

I studied a lot of crowdfunding campaigns before I launched mine, and the best ones always gave me a distinct feel for the person who was creating it. Even when the film wasn’t autobiographical, I connected to pitch videos where the filmmaker’s personality came through in some way. If the film is based on your life, say that. I did, and I think it helped. People want to know why you’re telling this story. What does it mean to you?

Conversely, sometimes I see super elaborate, tech-savvy videos that give me no real sense of the project and what it means to the filmmaker. They are cool to look at, but sometimes just sharing your story and passion is enough.

3. Make it a Family Affair.

We were building a community, or a film family, that would grow throughout the campaign. When my family members or close friends donated, I would post an old photo of us together on Instagram, recounting our connection in the caption. It made them feel good and made other people want to be a part of the family.

Don’t skimp on the gratitude! Each time we got a contribution, we thanked the person either on Twitter, Facebook, Instagram or email. When we didn’t know the people, we searched for them on these social media sites, located them, and sent a special thank you message. We found Twitter to be the best platform for sending serial thank-you’s. We even thanked folks who weren’t on social media, on social media. It helped to build our momentum. People could look forward to this recognition and feel good about supporting us.

No successful crowdfunding campaign begins the day it launches. There’s a lot of work that has to be done prior to the launch, such as getting a team together (more on that later), emailing organizations, friends and colleagues to let them know about the upcoming launch, reaching out to any well-known people or “influencers” and seeing if they’ll spread the word to their followers or donate, and putting together a captivating video and Kickstarter page.

A wise woman once said that it’s actually the work you put in before a campaign that makes it successful, meaning the relationships you’ve built over years helping on friend’s film sets, reading their scripts when you really didn’t feel like it, or going to support their screenings. It all comes full-circle during a campaign.

6. One Influencer goes a long way.

Related to my last post. Get in there early. I sent an email to Franklin Leonard, the founder of The Black List, weeks prior to my campaign launch. During the beginning of the campaign, I followed up with him again, and he tweeted this to his many followers: 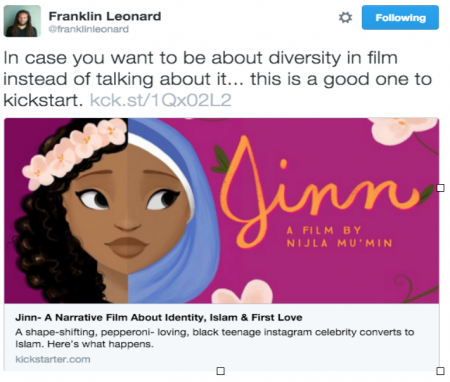 Minutes later, we received a $1,000 contribution from Salim Akil, the director/producer on Being Mary Jane, Sparkle and Jumping The Broom, who found about the project from Leonard’s tweet. It was a fun, exciting surprise, and I danced in my room while eating Chinese food.

Soon after this, we received endorsements and contributions from Issa Rae, Gina Prince-Bythewood, Lena Waithe and Ava DuVernay. Then, some influencers reached out to us. That was rad.

Nobody wants to be tagged along with 28 other people on a Facebook post, even if it’s for a good cause. Save yourself from their quick “remove tag” by sending emails to individual people prior to, and during, the Kickstarter campaign. If you have as many friends and colleagues as I do, it may seem daunting, but if you start on the project preparation at least a month before the launch, you can email about 10 people per day, and you should be in good shape by the time of launch. Make a Google spreadsheet outlining relevant organizations and people. Check them off after you’ve contacted them and note their response.

Yeah, it’s super cliche, but it’s so true. I would highly advise not to ever do a crowdfunding campaign by yourself. Not only is it kinda impossible, it’s also no fun. Believe me, I know. During film school, I attempted to raise $25,000 for a thesis film and almost had a heart attack trying to reach my goal. I raised $9,000, which was impressive for a 13-minute film, but I underestimated how much work goes into the campaign and how much I needed others to help me.

This time around, I worked with two of my close friends — filmmakers Avril Speaks (who is a producer on Jinn) and Yanique Sappleton, who will also be working on the film. When I was at work, they sent tweets, emails and updated the social media sites, and when they were at work, I did. We made a schedule and rotated. Since I was the face of the campaign, I always made sure to tweet, post and email from my personal pages frequently.

Build a team, even if it’s only one other person who can schedule posts while you’re at work. It will save you a lot of stress and panic. When the days start ticking down, each one counts.

Also related to number 4, press and blogs are integral to a successful film campaign. You should reach out to two or three relevant blogs or publications prior to launch. We reached out to Blavity, an online portal for black millennials since our film is about a black millennial. We also got very popular write-ups on Shadow & Act/Indiewire and Colorlines.

Pitch the campaign to publications in an email and see if they’d be interested in doing a write-up, feature or Q&A with you during the campaign. It’s best to have at least one press/blog post each week, and as the campaign builds momentum, bloggers and publications will reach out to you to feature the campaign. Share these articles widely. They help a lot. A good one can get you a lot of contributions.

Many people won’t respond to your emails for support, but many more will. Never start to doubt yourself or give up because you didn’t hear back from that blog, or that famous person didn’t respond to your tweet. Thrive off the support you are receiving and use that to keep the momentum going.

People love rewards, especially ones that are special and unique to the project being funded. We partnered with an amazing visual artist/filmmaker named Vashti Harrison, who designed a series of #blackgirlmagic prints that we unveiled throughout the campaign and were a big hit.

Related to #8. I should’ve never tried to raise $25,000 for my thesis film. $10,000 was realistic, but I was overambitious and I had the “it will happen” mind. Don’t make that mistake. Be real with yourself. What can you realistically raise? Think about the communities you belong to, the people you know, and not necessarily what you need. You may need $300,000 for the film, but crowdfunding may not be the place where you raise all of it, unless you’re really, really popular. Though it’s a low-budget indie film, I needed more than $25,000 to make Jinn, but I knew I might not be able to raise it on Kickstarter. It was more important for me to build a community and raise what would prove essential to help us move forward.

The best campaigns are the fun ones. Even when the subject matter is serious, you want to engage your supporters through laughter, positivity and endurance. This doesn’t mean you can’t comment on how much work you’re putting in on social media, but it’s hard for people to support a “I can’t do this” rant. Don’t get desperate. Don’t spam innocent people on Twitter and Facebook, tagging them repeatedly when they don’t want to be tagged. Keep it fun and keep it classy. Make your project so fun and cool, that everyone wants to be a part of your film family!

Nijla Mu’min is a writer and filmmaker from the East Bay Area. Her short films have screened at festivals across the country. She has written for Shadow & Act, Bitch Media, The Los Angeles Times, and Vice. She is the recipient of the 2012 Princess Grace Foundation — Cary Grant Award for her film, Deluge. In 2014, she was one of 10 writers selected for the Sundance Institute’s Screenwriters Intensive. She was the winner of the Grand Jury Prize for Best Screenplay at the 2014 Urbanworld Film Festival, for her script Noor. She is a 2013 dual-degree graduate of CalArts MFA Film Directing and Writing Programs.