Is It All About “Who You Know”? The Seven Steps Towards the IFP Narrative Labs 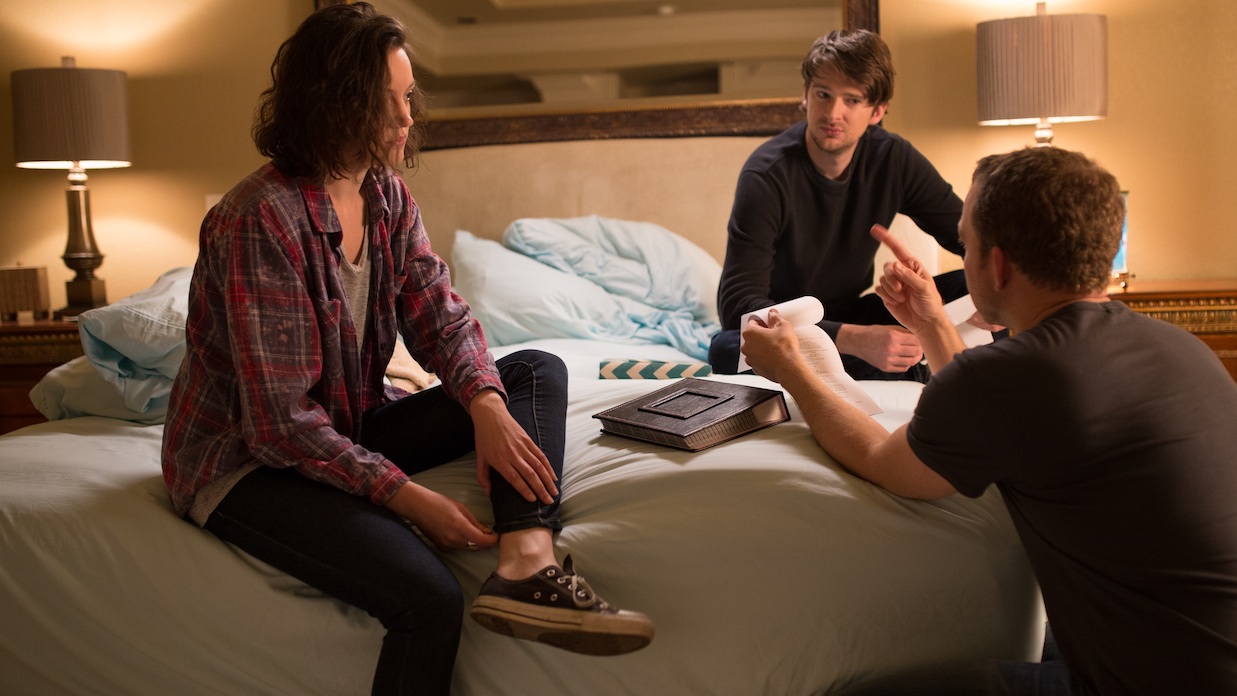 Jason Headley, Eleanore Pienta, and Will Rogers on the set of A Bad Idea Gone Wrong

“It’s all about who you know.” That’s the suspicion when you’re a filmmaker trying to get the right kind of attention. I found this troubling because I knew absolutely no one. I kind of knew my mailman, but I could tell he wasn’t that into my movie when I talked to him. However, I was just selected for the IFP Narrative Labs with my film, A Bad Idea Gone Wrong. So, I went from an unenthusiastic relationship with a postal carrier to being in the IFP Narrative Labs. And you can too in seven easy steps!

Step One: Write a Script!
You’ll already have five feature scripts you really like and a couple of others that sort of embarrass you. One day, realize none of these scripts are sufficiently low-risk for a first-time feature filmmaker. So sit down and engineer a story that can be told from a single location. Call on all the skills you’ve learned by writing and re-writing, reading and studying. Touch on some of the themes you keep bumping into over and over again in your work. When you’re done, you’ll have a comedy about two would-be thieves who accidentally arm the alarm system and have to break out of the house they just broke into. When they discover an unexpected housesitter, they suddenly have to deal with a mild hostage situation, double crosses, and discoveries that make them question themselves and each other. Title this script A Bad Idea Gone Wrong.

Step Two: Get Rejected!
Don’t just get rejected once. Do it a lot. Apply to the Sundance Screenwriters Lab four times, make it to the second round of consideration four times, get rejected four times. Submit to all kinds of screenplay competitions. Never win. Send your short films to an impossible number of film festivals. Get into precious few of them. Apply for a grant with the San Francisco Film Society. They’ll say no. Apply again later with a different project. They’ll say no again.

Step Three: Say “Yes” to All of the “No.”
You won’t make it any further than the second round of the Austin Film Screenplay Competition. Go to the Austin Film Festival and Screenwriters Conference anyhow. Meet people who take this a serious as you do. Read their scripts, ask them to read your scripts. Give notes, take notes, get better. Make true, lifelong friends.

Go to the film festivals that accept your short film. See all the other short films. Be truly blown away by some of them and share your praise and admiration with those filmmakers.

When the San Francisco Film Society says you’re not a finalist for the Kenneth Rainin Foundation Filmmaking Grant, Tamara Melnick will email you personally. She’ll do this because she wants you to know she really liked your project. This will feel like the height of human kindness. Thank her for that rare peek behind the curtain. Ask if you can buy her a coffee.

Step Four: Listen to Tamara!
You’ll find her really smart and funny and much easier to talk to than your mailman. She’ll suggest you consider applying for a residency at SFFS FilmHouse. Do this. She’ll also suggest you apply for IFP Emerging Storytellers. Do this, as well.

Step Five: Attend IFP Film Week!
When you get into IFP Emerging Storytellers, go to New York. Get a brutal cold the night before you leave so the entire experience becomes an act of sheer physical will. Be half-sure you’re going to die and half-sure you’re doing everything wrong. In fact, when you get a meeting with Anne Lai and Rachel Chanoff from the Sundance Institute to discuss your project that’s under consideration for the Screenwriting Lab, be so out of sorts that you actually leave that 30-minute meeting ten minutes early. This will offer you a night of restlessness no amount of Nyquil can conquer.

But, even in your sickly state, meet Amy Dotson and Zach Mandinach from IFP. You’ll like them a lot and be stunned by how hard they’re working to help you meet people who might be interested in your project. Also, meet other filmmakers. Ask each other questions, make each other laugh, genuinely wish them well with their projects, and hope—deep down in that part of your heart that you don’t like to talk about—that you get to see them again someday.

Step Six: Make Your Movie!
This will happen in a way that — despite the fact it took you two years to get there 00 feels sudden. Your daydreams about what it’s like to make your first film will prove to be nothing more than gossamer wishes on colorful shooting stars. And, even with this discrepancy, it will immediately be your very favorite thing. In fact, the moment you wrap, tell your wife, “I want to make another one tomorrow.”

Step Six: Apply for the IFP Narrative Labs!
Now that you have a film in post-production, reach out to Zach about the IFP Narrative Labs. There will be a part of you that worries this only reinforces the “who you know” loophole of which you were so suspicious. Reassure yourself that you don’t actually know him that well. Plus, this is just a messy byproduct of endlessly throwing your hopes at so many high walls. You’re bound to end up knowing someone.

Step Seven: Attend the IFP Narrative Labs!
On the very first day, meet nine other filmmaking teams. Try to pretend you belong there. As the days pass, learn the other people have been doing the exact same thing. When you realize you haven’t figured out who, among the group, is the asshole, logically fear it must be you. In the end, understand you’ve somehow found a community of people that, instead of creating a rat’s nest of unruly egos, is genuinely interested in learning from an incredible group of advisors and from one another. After five days, you will be exhausted, inspired, filled with new knowledge, ready to tackle the problems in your film from new angles.

Most importantly, you will have new allies in this ongoing battle to make something that feels honest to you in a world that grows increasingly clever at disguising its lies. And at that moment you’ll see: It is, in fact, all about who you know. But in a beautiful, and slow, and complicated way that you and your mailman could never have imagined.