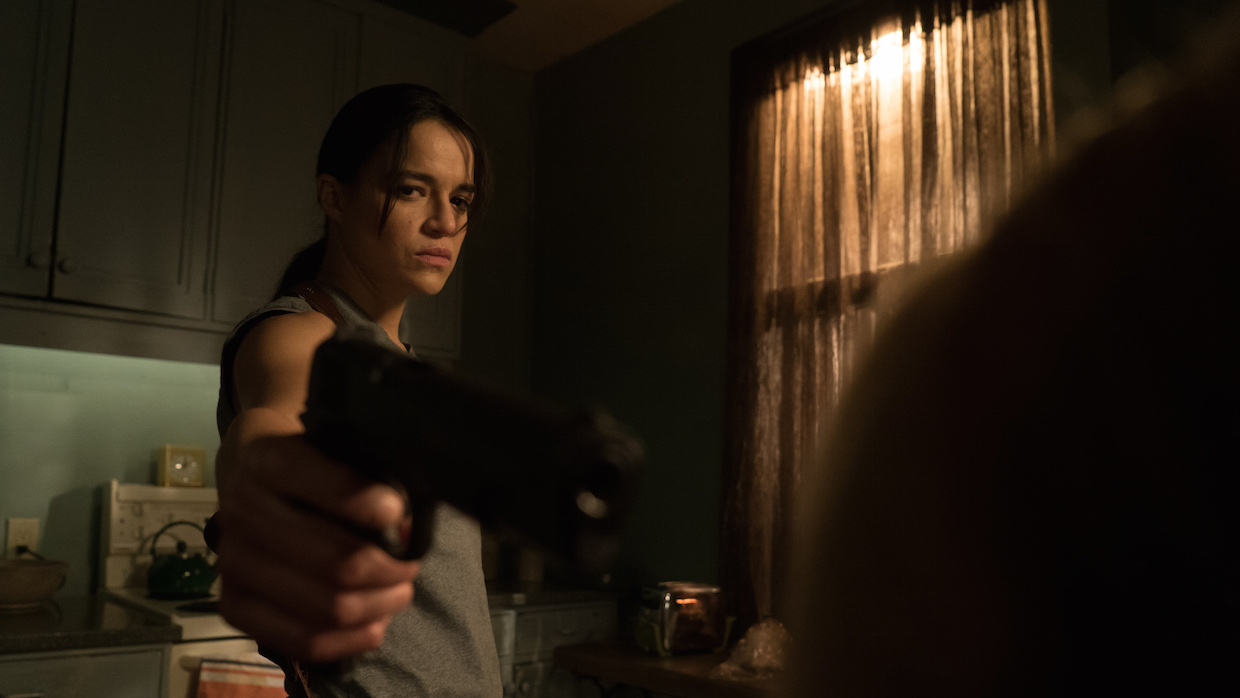 Michelle Rodriguez in The Assignment

Decried as an offensive trivialization of trans reassignment surgery by GLAAD as soon its premise was announced, Walter Hill’s Re(Assignment) makes the subtextual defense for itself early on. Institutionalized for two years, surgeon Rachel Ray (Sigourney Weaver) — a formerly respected practitioner stripped of her license — is being questioned by a shrink (Tony Shalhoub) as to why four corpses were found in her illicit medical officet. Ray was performing gender reassignment surgery on the willing and unwilling, but she wasn’t just a doctor, she insists; she was also an artist, and — quoting Edgar Allan Poe — declares that proper art is indifferent to moral considerations. And so should this movie be, right?

Except Re(Assignment) isn’t art, it’s trash. That’s, of course, a distinction that doesn’t actually exist, but Re(Assignment) is a proudly pulpy joke made for an audience of one, its director. Neither Hill nor Sigourney Weaver are noted for their affinity with camp, but this is a deliberate foray. Weaver’s performance as a hubristically arrogant doctor who derides her interrogator for being insufficiently familiar with Shakespeare prompts her to chew scenery gleefully. Doubling down on the comic book illustrations he added to his director’s cut of The Warriors, Hill overlays sketched-over buildings and characters to transition from the narrative present to the events that led to Ray’s being locked up.

Frank Kitchen (Michelle Rodriguez, initially sporting a transparently fake mustache and goatee) was a pro assassin who was kidnapped and made female by Ray; she wants to know why and pursue bloody vengeance, and that’s pretty much the whole plot. I’m going to punt on the sexual politics, which are way above my paygrade, but the premise plays like a twist on Tootsie. “I was a better man with you, as a woman,” Dustin Hoffman’s Michael Dorsey told Teri Garr, “than I ever was with a woman, as a man.” Here, that doesn’t work: Ray tells Frank that she did her a favor — “I liberated you from from your macho person” — but as a non-renamed woman Frank is exactly the same. I will also punt on how to parse this.

Words like “laconic,” “economical” and “efficient” have long been used to describe Hill’s movies; his sophomore film, 1978’s The Driver, is the closest American equivalent to Jean-Pierre Melville. But he’s also kept up with the times: as in 2002’s Undisputed and 2012’s Bullet to the Head, his movies have grown louder, larded out with conspicuously tasteless music (the themes here are courtesy of Giorgio Moroder!) and contemporary-ish overlighting through the windows. (Another less fortunate accommodation to the present moment, though maybe it’s just another perverse joke: Hill, an excellent location shooter and behind one of the definitive San Francisco films, 48 HRS., here unconvincingly pretends Vancouver is that city.) There are some new moves here as well, mostly consciously silly: invocations of Poe and Shakespeare bring up their images in triple split-screen, ringing up like a slot machine. But “economical” still applies, as in the one shot in which male Frank picks up a woman in a bar, shot through a jukebox. She puts on a record, steps back, looks his way, and by the next shot they’re back at his hotel. The film’s structure is convoluted and lags in places, sometimes for no real reason: a scene in which Frank leaves her dog with a friend before going to kick ass serves literally no narrative function. But a new Walter Hill film is always a good thing, and while this is an assuredly mixed bag that’s not as funny as it seems to think it is, the instantly harsh first wave of reaction is way off.

Kiyoshi Kurosawa was absurdly prolific in his just-before-respectability direct-to-video yakuza film years: between 1994 and 1997, he directed thirteen movies. Even though he’s worked at a more reasonable pace since, quality control has never been his strong suit, so it’s not surprising that if his first film this year, Creepy, has been generally well-received, then his second is probably not that good. Daguerrotype is also Kurosawa’s first foreign production, though shooting in French doesn’t seem to have been an obstacle: he frames the winding streets of Paris’s exurbs much like Tokyo in Tokyo Sonata, and the entire cast is fine. But the material is very weak and, at a remorselessly bloated 130 minutes, attenuated enough to provoke increasingly great impatience.

Genre-wise, this is a ghost story in a moodier, gothic vein rather than a belated J-horror attempt to scare you silly. Kurosawa always took a fairly eccentric approach tothe post-Ring boom — minute for minute, Bright Future is as inexplicable and confounding as anything out there, and even Pulse, one of his soberest works, has only one pure scare, and that’s totally silent. But Kurosawa can goose you with the best of them, and the opening offers a doozy. Jean (Tahar Rahim) arrives at an isolated mansion to apply for the job of assistant to photographer Stéphane (Olivier Gourmet). Jean’s left alone in the lobby for a minute, and the camera slowly drifts from the main room to a hallway. A door opens with a puff of wind, and — disregarding basic horror rules about never going into a strange room alone by yourself — Jean wanders alone down the hallway and into the kitchen. You wait for the horror hammer to drop at any minute, but it never does, not even after he spots a mysterious girl dressed in black on the darkly lit stairway.

Spooky stuff, and few are better at this kind of rudimentary, carefully executed visual tension-raising but what follows makes clear that true fright is not on the agenda. The plot is not really worth recapping, and the themes are familiar: photographs capture the dead, but their souls may come back with a vengeance, it’s in the nature of the medium itself, etc. I can construct a theoretical argument that this film melds Kurosawa’s characteristic visual syntax with an inquiry into classical film language and etc., but that would be both plausible while completely overlooking how dull much of this. Stéphane relationship with his daughter Marie (Constance Rousseau) is predictably unsettling and domineering — whether she is in fact just a spirit is the question the movie needs an eternity to answer in the most unsurprising way possible.

The best thing about the movie is Stéphane’s basement studio, a massive set with lots of pockets of total darkness broken up by occasional cones of light. This is a very familiar look for Kurosawa, seen in Pulse, Cure, Serpent’s Path and many others, and it’s lurking with potential menace that never gets activated. The worst thing is pretty much everything else: the subplot about rapacious and predatory development of the suburbs, which is handled without much impact or real curiosity; the fact that Gourmet — an actor whose cred has been established many times over in his work with the Dardennes — is at times reduced to the horror movie function of walking, very very slowly, through dark spaces; the dialogue, which lands with Eric Roth-esque literalness :”What’d you do while I was gone?” “I thought about the past.” Themes!

I’ve been anticipating Eduardo Williams’ first feature ever since seeing his amazing short Could See a Puma; The Human Surge, while not precisely what expected, confirms his huge talent. Where Could See a Puma had a number of coup-de-grace shots that stunned in different ways, The Human Surge mostly sticks with one shot strategy across three segments in Argentina, Mozambique and the Philippines: a camera that follows a subject some 10 to 20 feet back at all times, in enormously long shots whose ambition and duration only gradually become obvious. Sounds like Alfonso Cuaron, but the effect is entirely different. For starters, the camera is roughly handheld, the grain is blown way out, and there is clearly no mass choreography: passing civilians are always curiously gazing at the camera. This works: one of the film’s recurring motifs is the pervasiveness of phones (both flip- and smart-) and the general saturation of technological noise taking over the world. “Did you know the future’s silence will sound like a crowded food court?” one character asks, and the unignorable camera is a stand-in for that.

The plot is unsummarizable, and I’m not even sure the word “plot” even applies. What Williams does here is deep immersion: by traveling so far back from characters who often becomes smaller points in urban and rural settings, the sense of seeing world rendered immense is intense. The first shot establishes that viewer patience will be rewarded: a young guy wakes up in darkness, does his morning ablutions, treks through his dark domicile towards an increasingly large roaring, and opens the door to reveal clearly flooded streets, a massive effect that cost nothing. Three countries are visited via two fairly staggering transitions that should be left as surprises, and each segment has its own look: the 16mm grain of the first third is amplified by the second, shot on a Blackmagic pocket cam subsequently reshot on Super 16mm from a computer monitor, a whole new look sort of comparable to looking at a lagging livestream. I’d like to say more, like another four paragraphs more, but am not sure what more could be translated into words: I could describe shots at great length, but can’t figure out how to get to the other side and translate them into analysis. This is a wholly original work, and that’s worth more than any notion of success or failure. I’d argue it’s super pleasurable as well, but your mileage may vary; definitely check out Could See a Puma first.

I don’t have much on graphic novelist Dash Shaw’s first film My Entire High School Sinking into the Sea, which can be more or less described as Adult Swim with a greater sense of visual ambition. That’s the basic sense of humor pocket, with a stacked vocal cast (Jason Schwartzman, Reggie Watts, Lena Dunham, et al.) doing pretty much what you’d expect. The sense of humor just isn’t my bag: I’m just not the guy who thinks hearing a character with the sobriquet “Lunchlady Lorraine” having her name repeated dozens of time is infinitely hilarious. The title should be taken literally, and Shaw has a lot of different ways to depict it in widescreen, but none of them are of particular interest to me: swirls of rising ocean tides rendered via colored pencils and other innovative lo-fi tactics left me cold, though I did enjoy the Street Fighter, jerky 8-bit rendition of a brief fight. This may indeed be a visually forward-thinking work, but I simply can’t tell, so I’ll steal the movie’s own dialogue for a summation: “It’s a mixed to negative review, but they say it’s ‘dazzling?'”