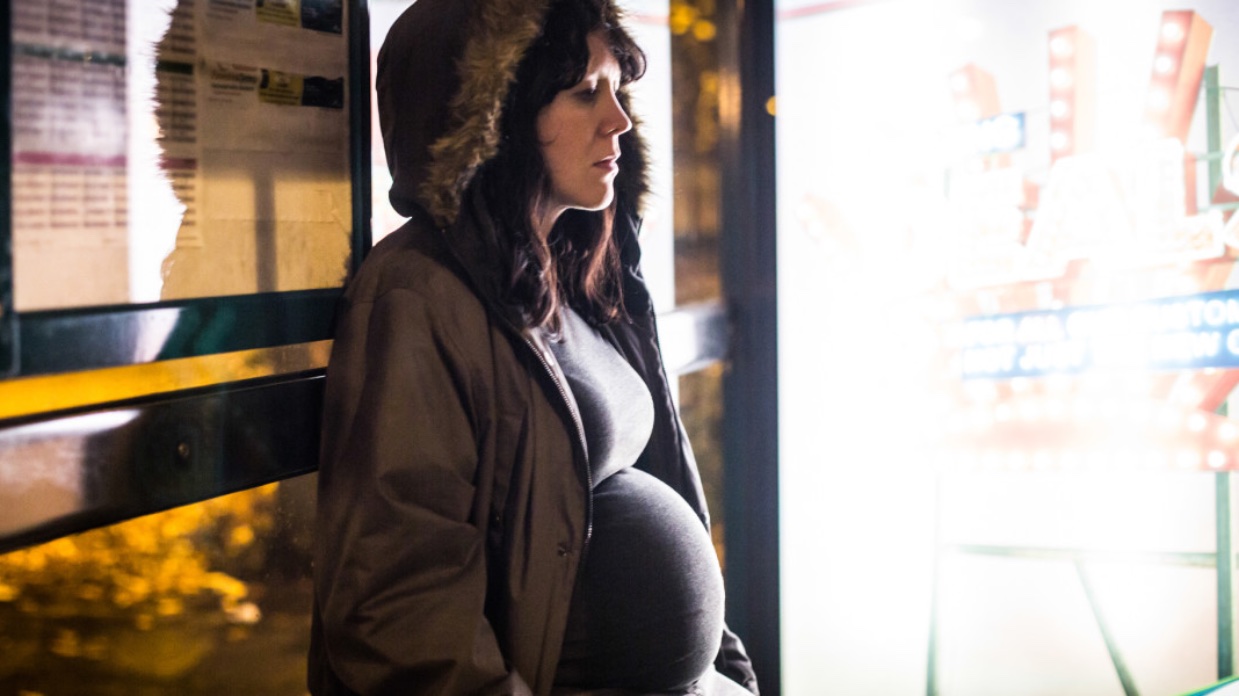 Joining Ms. 45‘s blind, black-frocked avenger and Kill Bill‘s sword-wielding, catsuited femme fatale in the pantheon of female killer films is the seven-and-a-half months pregnant Ruth in Alice Lowe’s microbudget pitch-black thriller comedy, Prevenge, receiving its North American premiere at the Toronto International Film Festival. Ruth is just six weeks from delivering her first child, but she’s still grieving the death of her husband several months earlier. And she’s receiving messages from her fetus, who seems to be speaking to her… and urging her to kill.

Giving Prevenge an extratextual yet inside-the-frame kick is the fact that its first-time feature director, who also writes and stars, was herself seven-and-half months pregnant while shooting. Below, Lowe — well known in the U.K. as a television comedienne as well as the writer and star of Ben Wheatley’s Sightseers — and I start off below talking about her pregnancy — how it wound up colliding with her production, and what it added to the movie.

Prevenge screens this week at the Toronto International Film Festival.

Filmmaker: Okay, you’re starring in the film as a pregnant woman, and you were pregnant while directing it. How did that confluence of events come about? Because, after all, it’s quite easy to fake a pregnancy on screen and being seven-and-a-half months pregnant must make directing a tougher job. Did you want to make this film while pregnant, or is that just the way it worked out?

Lowe: That is just the way it worked out! I wanted to direct a feature, but development was slow. Meanwhile, I became “in the baby way.” I was worried for my career, for money, for everything. I kind of assumed this would put my directing career on hold almost indefinitely. But instead this opportunity came my way and I forced myself to seize the day. A director I’d worked with previously asked me if I wanted to do another film, and at first I said no because I was pregnant. Then I thought, “Hang on. What am I throwing away here?” I then actually wrote a pregnant character and script because of my “rotund” condition. And said, “Look guys, we gotta shoot this fast.” It was actually a very galvanising M.O.! Then, although I couldn’t have predicted this at the time, surprisingly the directing was a joyful and relaxed experience, and I couldn’t have enjoyed it more.

Filmmaker: As a director and an actor, what did being pregnant, and experiencing those emotions, add to the film and to the character?

Lowe: It’s interesting because a couple of reviews mention my “weariness,” but I have to say, that was acting! I’m one of the lucky people who had good energy when I was pregnant. Only towards the very end did I feel knackered and heavy, and by that time we’d finished shooting. The main impact of the pregnancy was psychological: my fears of what it meant for my identity, body and future. I think I exorcised those pretty thoroughly in the film, fingers crossed. I actually had a really lovely pregnancy. I was glad to be busy though. My thoughts and fears might have driven me mad had I not kept busy and kept doing a job I love. I didn’t have the isolation that some women feel giving up work and not being as surrounded socially as they were before they were pregnant. What I did feel was that things are very vivid and intense during pregnancy. Mainly because of the cocktail of hormones. I was on a high half the time — the best drugs I’d ever taken! I wanted to put that vividness into the film with colour and imagery. The powerful revulsions and dreams I had I hope are all in there. The psychedelia of pregnancy!

Filmmaker: You’re playing a killer in this movie, as you did in Sightseers. What did you take away from that film that you applied to this one in terms of understanding audience sensibility, violence and the dark comedy of murder?

Lowe: I guess I learned that to “show” is to engage your audience viscerally. And to me that aligns with pregnancy, as what could be more gory? I wanted to keep the audience on their toes in terms of tone and content, as I felt the character is treading quite new narrative territory. I don’t know how used to seeing a violent pregnant woman an audience would be. I guess I had trust that the female character, although unconventionally “unsympathetic,” could take you on this narrative journey, and Sightseers gave me the confidence that could work. Comedy and violence is something I’ve often mixed in my work. I guess I am deliberately testing people’s boundaries in this film. How far can your traditional sympathies for a pregnant woman go?!

Filmmaker: I understand the film was done on a very tight schedule. How many days, and what were the production and directing decisions that were made in order to achieve the film in the time that you had?

Lowe: We filmed for 11 days over a period of about three weeks. You can actually see my bump changing size apparently! I had written and worked on several low budget shorts and features before, so I knew what could be achieved. My script was based around what I knew was viable. I structured it as a sequence of episodic “two-hander” scenes. this meant we could get an actor in for a day. We would get the “murder” in the can in the morning, with whatever SFX and stunts, and quite a rigid filming style. Then in the afternoon, we would film the dialogue. We would pre-set everything, lighting etc, and roam around documentary-style, using improvisation. Then we filmed all the “sandwiching” scenes with Ruth in one go. Then other visual sequences we spent longer on as they were more dependent on a particular situation or light or location. For example, we filmed one sequence on the streets of Cardiff at halloween. To me, this is how I’m used to working. At times it was guerrilla style. I like to keep shooting perpetually, and rarely have down time. DP Ryan Eddleston is amazing and also used to this approach. Of course you then give yourself more work in the edit.

Filmmaker: Yours is being talked about as the next great cult revenge movie. What revenge stories, whether they be films, books or plays, have impressed and influenced you?

Lowe: Really? Wow! Um… wow. Well… I love Ms. 45. Kill Bill. Lady Vengeance. Old Boy, Dead Man’s Shoes — all fantastic. But I do like a slow burn revenge too. Something like What Ever Happened To Baby Jane? you could argue was a revenge movie. I guess a grudge is like the ghost of emotion, still haunting the living world, and the penalty can be paid physically or emotionally. I was fascinated by the idea that someone becomes so seized by that one emotion, that they cease to exist. It’s as if they die, and become this force, with one purpose. They become weaponised! I wanted Ruth’s baby to seem like this elemental primal force, the embodiment of rage. I studied Classics, and drew upon the goddesses of vengeance, the Furies. We use excerpts of their filmic depiction in Crime and Punishment in our film. I guess some human emotions stand the test of time; revenge is an idea that’s been translated down through the centuries. In the classical world there’s no getting away from revenge. It’s a cycle and always has a knock-on effect. Agamemnon kills his daughter, so his wife kills him, then her son kills her, etc, etc. So I guess what I’m saying is… they embraced the notion of “sequel.”