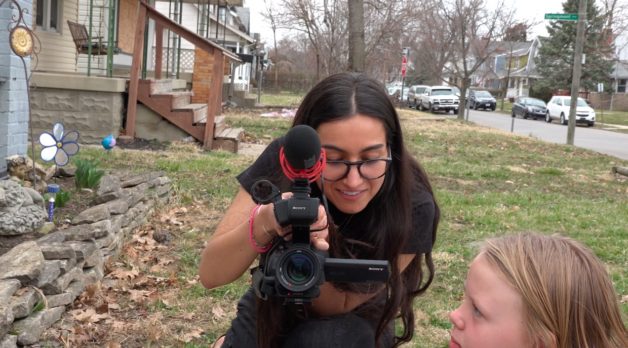 Michele Mansoor began freelancing full-time for casting director Jennifer Venditti’s company JV8 Inc. after college, scouting for A24 productions like the Safdies’ Good Time and Uncut Gems and HBO’s Euphoria. While casting for the title role of Yann Demange’s White Boy Rick, Mansoor returned to Columbus, Ohio and was introduced to Chrissy Brown, a woman whose 15-year-old son, Gage, would’ve proven perfect for the role—had he not been incarcerated for felonious assault with a firearm.

After serving his 18-month sentence, Gage would quickly return to prison for a similar offense and an additional four years of confinement. Although she was unable to cast him in Demange’s movie, Mansoor’s ongoing fascination with Gage and his family, a rough-around-the-edges but tightknit clan who find themselves continually returning to prison for various felonies, led to directing her first feature, the documentary ’Til It’s Backwards, currently in production. Incorporating archival footage from personal YouTube vlogs, cellphone footage and Facebook livestreams, Mansoor’s raw film embeds the viewer into the lives of the Brown family, seemingly trapped in cyclical incarceration. The film, which is structured to build to Gage’s release from prison on July 4, 2022, is a true labor of love, and Mansoor credits her scouting experience as having prepared her for this endeavor. “It has informed everything,” Mansoor says. “You are an outsider coming into someone’s life unannounced. There’s a big responsibility that comes with that. It can be really destructive if you don’t handle that with care.”

Born in the tri-state area, Mansoor’s family relocated to a suburb of Columbus, Ohio, before entering the first grade. A fish out of water by her own account, she remained hopeful of one day returning to New York. That opportunity came when Mansoor pursued an undergraduate degree in screen studies at The New School’s Eugene Lang College of Liberal Arts (“the only school I applied to—I had terrible grades!”), and it was thanks to her internship with JV8 Inc. that Mansoor’s career path would be forged. Mansoor’s first assignment was uploading scouting videos Venditti had recorded in Panama City, Fla., for Andrea Arnold’s then-upcoming feature, American Honey. “One specific interview will go down in history as having changed my life,” Mansoor says. “Jen is interviewing this boy in a parking lot, and they have the most beautiful conversation. I was like, ‘Wait a minute, is this really a job? All I’ve ever wanted to do is talk to strangers and have an excuse to go up to people who are interesting to me.’ I didn’t look for this job or even know that it existed, but actually seeing it [in practice] made me realize that this was my dream.”

One of Mansoor’s biggest discoveries was actor Keith William Richards, cast in Uncut Gems. After endlessly scouting the Diamond District, Mansoor visited the Hells Angels Clubhouse on East 3rd Street one afternoon, a detour that ultimately proved unproductive (“the door was locked, and there was no one there”). Disappointed, Mansoor walked up 1st Avenue and came across a man taking a phone call outside the L train subway station. “He had a very iconic look,” Mansoor recalls. “I stopped him there on the street, interviewed him and told him about the project. He had been approached by street scouts throughout his life but nothing had ever come to fruition.” After a more formal audition a few weeks later, Richards was officially cast. Mansoor’s heart flutters when she remembers the serendipitous nature of their first encounter. “What if I didn’t say anything [to him] that day?” Mansoor ponders. “What if I was in a bad mood? It’s a vulnerable job! You have to be able to put yourself on the line and talk to a stranger. It’s not just about seeing someone, it’s also about you being seen. Sometimes, if you’re having a bad day, you just let people pass.”

With the Safdies’s production company, Elara Pictures, on board as executive producers, Mansoor’s film dives headfirst into the lives of the Brown family, and the filmmaker is fully aware of the delicacy involved in receiving such a wealth of access. Although she admits that she’s “notoriously not well watched,” Mansoor cites several documentaries—Mark Bell and Mary Ellen Mark’s Streetwise and Michael Apted’s Up series chief among them—as inspiration for ‘Til It’s Backwards. “I love observing the evolution of people,” Mansoor acknowledges, “of going back into someone’s life and into their childhood, and I love interviews. I love digging into people’s shit.”—Erik Luers/photo by Lilah Loving