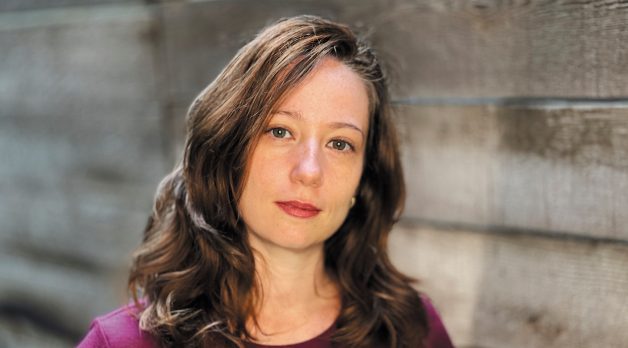 Nira Burstein learned how to make films backwards. Her alma mater, Queens College, did not offer film-related degrees in the early 2000s when she was a student, which unintentionally led her down a less conventional path. She was an editing intern in college, then proceeded to gradually master the technical crafts of shooting, directing and writing. Yet, according to Burstein, her appetite for professional expertise was only forged after a truly world-shattering cinematic first encounter. “In college, I saw the movie Donnie Darko, and I lost my shit,” she laughs over an outdoor iced coffee in the East Village. “What an amazing gift that Richard Kelly gave us.”

Though equally interested in examining neurosis, isolation and fate, Burstein’s feature debut Charm Circle is a far cry from Kelly’s chaotic cult sensation. Named after the cul-de-sac Queens community where she grew up, the film follows her parents as their previously enchanting family home crumbles around them, a physical manifestation of the toll that mental illness and unstable finances have gradually wrought. After premiering at Sheffield DocFest this year (where it won the Audience Award and was nominated for the First Feature Award), Charm Circle is slated for inclusion at Doclisboa in Portugal and Chile’s Valdivia International Film Festival—Burstein notes that “invitations are trickling in from around the world.” Apparently, a bickering Jewish couple living in Queens proves uncannily universal—including biting remarks about a nonexistent sex life. “As a daughter, I was cringing,” recalls the director. “But as a filmmaker, I was thinking, ’Shit, this is probably something a lot of people can relate to.’”

The audience is given virtually no window into Burstein’s own opinions about her family’s (dys)functional evolution. She only appears within the film as a soft voice asking questions off-camera, as a precocious child in sparingly spliced snippets of home movies or at the insistence of her family to take a “photo.” However, her relative removal from the documentary cements her role within the household. As the second-born of three daughters, Burstein has long occupied the role of demure observer, exemplified during grainy camcorder flashbacks of her mother Raya and older sister Judy alternating between psychiatric hospital stays, and the tension that manifests between her father Uri and younger sister Adina over her polyamorous engagement. “I definitely find that I tick a lot of the boxes of middle childness,” she smiles. “I used to be resentful of that, but now I really embrace this point of view.”

Burstein’s own catharsis still sneaks its way into the film, a facet she is vocally grateful for. She speaks of the film as a “communal experience,” essentially enriching her understanding of and relationship to her parents. With the added presence of the camera, the director navigated conversations with her mother she previously thought “impossible,” while her manically musical father provided Charm Circle’s score, which she describes as a “beautiful thing that just organically happened.”

Before making Charm Circle, Burstein largely worked in the realm of narrative shorts. The first, The Light House (2011), coincidentally utilizes her parents’ house as the principal location. Dreamy and dense, the film demonstrates the director’s adoration for the abstruse, something she hopes to tackle again in the near future. (“In the narrative script I’m writing right now, I’m trying to be intentionally opaque.”) To make the leap from short films to features, she felt she needed to turn to documentary as an exercise in financial utilitarianism and communicating authenticity: “You always have to bring something personal into the work because that’s what’s worth sharing.”

In the future, the filmmaker hopes to oscillate between documentary and narrative features. The script she’s writing, Cassie, Kit & Boy, incorporates themes of horror, consent and the nature of nonverbal relationships while still mining material from her own lived experiences. “I enjoy films that allow you space to think about it after. I think Charm Circle does that, and I would like anything that I make narratively to do that as well,” Burstein says, adding one last comparison for emphasis: “Just like Donnie Darko.”—NK