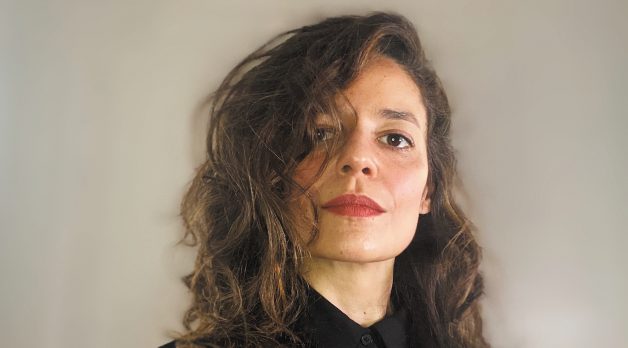 Rebecca Adorno has two websites, with only the subtlest of hyperlinks between them. The first is for her editing work—cutting documentaries like Peter Nicks’s Homeroom, Cheryl Dunn’s Moments Like This Never Last and episodes of Jehane Noujaim and Karim Amer’s HBO series, The Vow. The other is for her work as a visual artist whose installations have titles such as The Heat Death of the Universe and On Underwater Background Noise. “By recontextualizing scientific data, technology, and concepts involving physics of sound,” reads her artist statement, “Adorno creates physical representations of intangible phenomena while drawing parallels between aesthetics of beauty and lethality: signs and poetic contents that arise when catastrophic events, such as climate change, show flashes of sublime beauty.”

“I need to fix my website because people get confused sometimes,” she laughs. “But the other day, a filmmaker messaged me looking for an editor after finding my art website. She hadn’t found my editor website, and she wanted an artist who edits—someone with those sensibilities.”

Adorno grew up in Puerto Rico, where her father was an electrical engineer and both parents were activists for the independence of the U.S. territory. “My dad would bring home computers with editing software, and I was sort of self-taught,” she says. “Then, when I went to graduate school”—Adorno received an MFA in computer arts at the School of Visual Arts—“I was a T.A. in the film department. Bob Giraldi, who directed Michael Jackson videos, was the head of the department and said, ’You have to edit all the student films.’” When an opening arose for a Spanish-speaking editor to cut a Patagonia-branded documentary, Adorno began working professionally. “But it wasn’t until I worked for [director] Heidi Ewing that I really fell in love with editing,” she says. Cutting short docs for Ewing and partner Rachel Grady—a “super-experimental one with a lot of archival,” The Foreign Aid Paradox, detailed how U.S. aid to Haiti destroyed the Haitian economy—taught her a lot. “Heidi sparked this idea in me that I need to create a mood for characters to weave in before I even think about structure,” she says. Now, before constructing a linear assembly, Adorno will look at her scenes and identify the tone and psychology contained within them, always thinking about an audience’s emotional identification with the material.

Directors like Peter Nicks (with whom she’s working again, on a road movie music doc called Anthem) hail Adorno’s ability to bring fresh perspectives to the edit room, which he attributes in part to her work as a fine artist. When Adorno joined Homeroom, about Oakland High’s class of 2020, for which she and fellow editor Kristina Motwani won the documentary editing award at Sundance this year, she suggested that for this story of an academic year interrupted by the pandemic the school itself needed to be a character—“that we analyze the building as if it’s an organic living thing, and when the building empties it loses its life. There are the human characters, but the spaces they live in are important, and the audience identifies with these spaces, too. What human qualities can we give to these spaces?” For Anthem, which “has elements of a road trip, going from Detroit to Tulsa,” she’s defining for herself “the prevalent emotion in each city, in terms of the characters, and then through that we can figure out the structure.”

Adorno also likes to think about the psychology of her film’s subjects and make sure they register for the viewer. As for her work on The Vow, she says, “This guy [Keith Raniere] is evil, but I needed to let the audience know why [the women] liked him.” For Moments, about the late artist Dash Snow, she suggested using more of the subject’s own voice in the film and showing his artwork in a way that paralleled his character arc. Sound is especially important; Adorno does preliminary sound design along with picture editing to “know if a scene is going to work in the end.”

Adorno currently divides her time between New York and Puerto Rico—she has duplicate editing systems in each place. As for when she fits in her art, she says, “I do my art practice as an outlet, because I love it,” she says. “Sometimes, I’ll be editing docs and just need a break, so I’ll start working on my art. Right now, I’m creating records but instead of vinyl I’m using bio-plastics. Art inspires me, and I’ll come back to documentary energized.” — Scott Macaulay