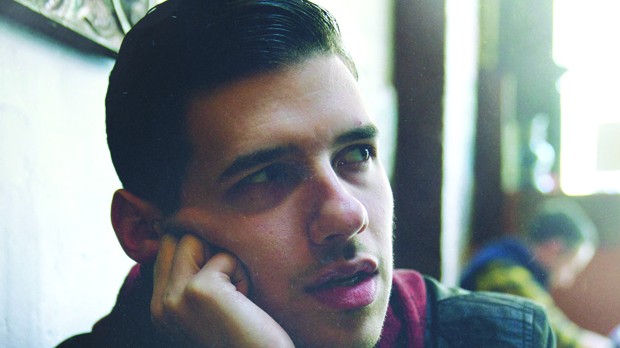 Throbbing, arpeggiating, oozing and splatting — one of the first things you notice in David Robert Mitchell’s creepy ode to old-school ’70s horror, It Follows, is the provocative score by composer Rich Vreeland, who records under the name Disasterpeace. (A riff on “masterpiece,” he says.) It’s the first movie music created by the Bay Area musician, whose previous work, including his much-celebrated 8-bit ambient soundtrack for the “puzzle-platformer” game Fez, has made him a standout in the world of both large-scale franchise games (Bomberman Live: Battlefest) and independents.

Vreeland and Mitchell hooked up over gaming, as a matter of fact. “David had played through the game Fez, liked the music and envisioned something similar for his film,” Vreeland says in an email. Scheduling the film amidst Vreeland’s game work was tough, but, the composer says, “I gave it a shot and we made the score in about three weeks.”

What was it like transitioning from games to film? “The practice is very different in a lot of ways,” Vreeland answers. “Video game music tends to be more about capturing a certain vibe that can be relevant over a longer period of time, regardless of many of the choices the player might make. The music also needs to stand up to repetitive listening in a way that film is fortunate not to have to deal with as much. I’ve found scoring film to have its own set of challenges, of course, but I enjoy knowing that the structure is more or less known. Sometimes when I’m working on a game, I don’t even know the shape it will ultimately take on until the very end.”

Reviews have approvingly referenced vintage John Carpenter soundtracks, but Vreeland says he and Mitchell also listened to Penderecki and John Cage for inspiration. Those modern classical composers point to the 27-year-old’s background studying at Boston’s Berklee College of Music. (This, after playing nu metal guitar in his teenage years.) An internship at the Singapore-MIT GAMBIT Game Lab got Vreeland into the gaming world. In addition to his scores, many of which are available for purchase online, Vreeland created January, “a generative music tool,” in which licking snowflakes creates musical progressions.

With so many horror movies feeling like — or directly based on — video games, it’s not surprising that Vreeland’s music fits well into the genre. Indeed, some of the best moments in It Follows are when the score drops any pretense of melody and just blasts atonal noise. “We tried to create a distinction between moments in the film where the characters are being developed, and the moments where we are tapping into the fear and uncertainty of their situation,” Vreeland explains. “We often use melodic cues to underline character and plot development, as well as segues between larger sections of the film. When scarier things are happening, we typically switch gears and use music more as a hair-raiser.” — S.M.