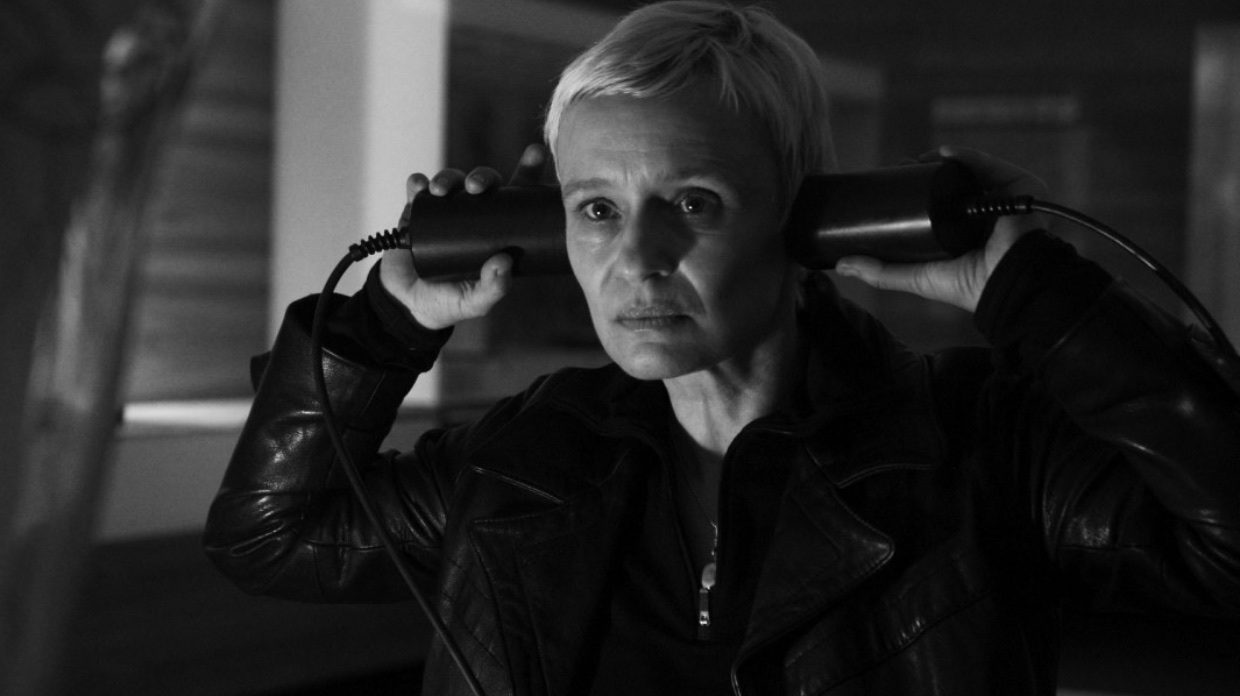 by Scott Macaulay
in Directors, Interviews
on Mar 31, 2017

Now playing in New York at Film Forum, Karl Marx City, Petra Epperlein and Michael Tucker’s follow-up to 2013’s The Flag. An entirely different meditation on national identity, in Karl Marx City Epperlein — who emigrated to the States following the collapse of the Berlin Wall — travels back to her East German homeland, and the film follows her as she attempts to discover the reason for her father’s suicide in 1999. Evidence that he may have been a Stasi informant deepens the urgency of her journey, with a visit to the Stasi archives revealing thousands of hours of footage, somewhere in which may be the clue to her father’s mysterious motivations. Seen on screen, Epperlein is leather-clad, with close-cropped blonde hair, wearing giant earphones, and clasping an over-sized boom mic, and the filmmakers cast her as their own cinematic heroine, one whose dogged research generates both suspense and, even, a kind of Tati-like comedy. With third-person narration, a film-noir score and sound design that inserts actual ambiences and effects surreptitiously recorded decades ago by the Stasi into present-day scenes, Karl Marx City is a stunner — an impressively inventive take on the personal doc that, with the sinister banality of its archival footage, expands from the personal to the political before concluding with a breathtakingly perfect ending.

Filmmaker: Tell me about the origins of the documentary. When did you decide to make a film based on this piece of family history?

Epperlein: The story has been around for a long time, and it took both of us an equally long time to decide to make it as a film. That’s because, one, the personal story was very close, and, for me, it took some time and a distance from the events. The tipping point when we decided to make the film was when all the NSA revelations coming out. People were talking about the NSA as being the same as the Stasi, which was not true. The Stasi was part of a totalitarian dictatorship which no one could control. [And telling it as] a personal story was kind of essential because talking in abstract terms doesn’t do anything. Even 25 years after the regime was toppled, it still affects people. After I learned about existence of these letters [about my father], I was curious to find out the truth about what actually happened back then. And the only way to find that out was to go into the archives of the Stasi. I didn’t know what I would find. I could have found something completely different. It was a difficult process to face the past.

Tucker: We’re married, so this story been part of my life. Petra’s father was part of my life, and after his death, when some of these details emerged, the Stasi story was the elephant in the room.

Filmmaker: How much time did you spend in the archives?

Epperlein: We went in there a few times over the last 18 months. It was a complicated process — you can’t just go and say, “Hey, I want to look at file.” You have to apply and have a plausible reason. I applied originally as a private person, and then when we decided to make the film, I applied as a filmmaker. There was a huge backlog [of requests], so it took a long time. We had to be patient. The fascinating thing about the archives is that, after the wall came down, the expectation was that many people [who lived through the Stasi] would want to see their files. But the opposite happened — it’s actually my generation who are more curious about the past.

Filmmaker: As someone who has worked quite a bit as a fiction producer, I was knocked out by the ending of the film, which involves an archival discovery. The way all your storylines and themes converge and are paid off by a single moment is astonishing. It’d be a perfect conclusion in a screenplay. Without giving away that ending, could you talk about it a bit? Did you work backwards from it and construct the film leading up to that moment, or was the film’s chronology the way it appears on screen?

Tucker: The film is quite chronological — [Petra] finding that photo [in the archives] was a total surprise, and when it happened, we had to stop. It was unbelievable and completely random.

Epperlein: I really did stumble on the picture. In the beginning, people thought we were crazy to [begin the] film before we knew what the result would be. It was very risky, for me as a person and for me as a [member of my] family. But this film is not only about finding out what happened to my father, it’s about how, as a society, come to terms with the past. We have to see what happened then to deal with the present.

Filmmaker: What about the decision to shoot in black and white?

Epperlein: The black and white was motivated by the fact that it looks really beautiful. When the Wall came down, one of the first things people from the West said was that they were amazed by how gray everything was. Well, we lived there, and we didn’t think our lives were gray! But using black and white as a metaphor seemed logical, and it worked well with our archival footage.

Filmmaker: Petra, let’s talk about you as a character. You’re on screen a lot, and this journey back into the past is your story. But I was also conscious of the way you made yourself into a very cinematic figure, with your hat and huge mic and headphones.

Epperlein: Well, I do walk around with a big mic and record sound! It’s more about the philosophical layers of my walking back into the past, looking for the voices of the past.

Filmmaker: And what about the decision to include a voiceover, but one that narrates your story in the third person?

Tucker: A voiceover is always the challenge with films like this because people have a lot of hangups with narration. My first film had my own narration, and I wasn’t super comfortable with it. It’s hard to pull off. But we needed a narrative thread that would pull us through so that it wouldn’t feel like a personal documentary — so that it would feel like a film.

Epperlein: And I shouldn’t be the one doing that voiceover because I’m so close to the story. So, we asked our daughter to do it.

Tucker: The biggest motivation for the voiceover was actually the voices on the Stasi tapes — these scrambled female voices telling you what happened: “She’s doing this, she’s doing that.” It’s very detached emotionally.

Filmmaker: I also loved the design choices you made with the subtitles. You can tell they weren’t just burned-in by some random subtitling house. There’s a real aesthetic to them.

Epperlein: For whatever reason, I have a large collection of East German newspapers from the late ‘80s, and, in its simplicity, the propaganda style in these newspapers is kind of beautiful. So, I found the same font as those daily communist newspapers, and, of course, it needed to be red — the ultimate propaganda [color].

Filmmaker: What sort of funding do you seek and obtain for a film like this?

Epperlein: We finished the film on our own.

Tucker: That’s not unusual for us. Most of our films have been self-financed; there can’t be another way. It would be great to have [financing] to make the film you want to make. But, of course, there’s a financial responsibility that goes along with that.

Epperlein: We are impatient, and funding cycles are slow. Also, this is a personal story, and we needed to have 100% control over every decision.

Filmmaker: Do you apply to the usual sources for funding?

Epperlein: Yeah, we do apply. But it’s all too slow, or [our subject matter] doesn’t resonate with people. So, we continue working.

Tucker: We’ve been doing this a long time, and we make a living by making films, so we have the freedom to make [our own] films the way we want to make them.

Filmmaker: Finally, let’s talk about the score and sound design. There are personal scenes in the movie that are given a very different spin by the score, which is very prominent and references film noirs and spy thrillers from the ’40s. And the sound design feels more sculpted than most documentaries.

Tucker: There are two things going on there. From the Stasi archive we were given a propaganda film, and in the scene with Petra and her mother, that cue is from that film. Our composer, Alexander Kliment, did some variations for that, as well as dark variations of German children’s songs. And then the entire soundscape is built with sounds that the Stasi recorded. When you’re in the prison, or on the street, it’s very subtle, but there are little tape scratches, warbling electronic sounds, whispers of Stasi operatives. We were given unlimited access to all of this stuff, which is incredible. There’s a crazy amount of stuff — car sounds, footfalls. The Stasi recorded sounds in people’s apartments.

Epperlein: It’s very creepy, the surveillance footage. Once I was given access, the people there were very helpful, and you can sit there for years. If there is audio, there is audio from a whole house being bugged, so you’re listening to [what’s going on in] the bedroom. It’s a big issue for the archive right now, because people’s privacy needs to be protected. It’s not just a random collection of stuff that people should be listening to, which is why it’s restricted to get in there.

Tucker: But everything we use is in the film is declassified. Technicians had to take out people’s names. No victims of Stasi oppression are identified.