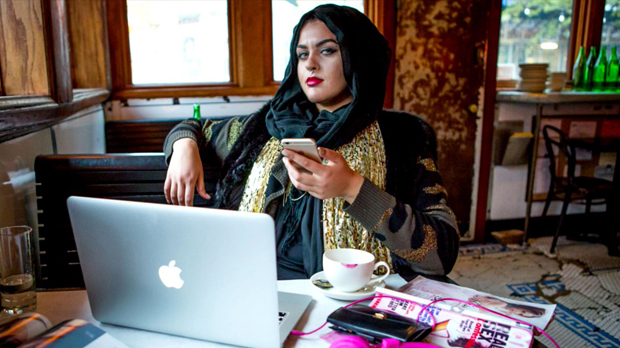 by Randy Astle
in Directors, Filmmaking, Interviews
on Jan 31, 2017

The Secret Life of Muslims is one of the least assuming but most important web series rolling out right now, particularly in light of the Trump administration’s recent order banning Syrian refugees and immigrants from seven Muslim-majority countries from entering the US. Amidst the ensuing melee between supporters and opponents of the ban one point that has been repeatedly raised is that, by and large, those who support the administration have no regular contact with any Muslims. While this is not true in every case, non-Muslims who have had exposure to Muslim Americans and Muslim immigrants are more likely to support immigration, while those who have only seen negative media portrayals of Muslims are more likely to support military aggression and policies that hurt Muslims.

The Secret Life of Muslims steps directly into this conversation. Conceived and directed by Joshua Seftel, the nonfiction series takes a very simple concept — to expose viewers to typical Muslim Americans — and executes it with grace and, critically, humor. Each installment embodies what well-known scholar Reza Aslan says in one of the most recent episodes: that “bigotry is not a result of ignorance, it’s a result of fear. And fear is impervious to information. The only way that you’re gonna dissipate that fear is by getting people to know someone that they’re afraid of.” Short of direct personal interaction, using film, television, and online video is perhaps the strongest tool to do that.

Seftel has a history of addressing social issues in his work, including the narrative feature War, Inc., which featured John Cusack as a witness to how America’s military-industry complex decimates a fictitious country and its Muslim population. The Secret Life of Muslims gives these faces a voice, letting us all see the exceptional ways in which many Muslim Americans — like activist Amani Al-Khatahtbeh, pictured above — have pushed back against discrimination, reached out to create understanding, and, in the case of Rais Bhuiyan, even forgiven and fought for someone who quite literally tried to kill him. The episodes are nonthreatening and nonpolemical, and because of that they’re poised to reach a broad audience — the videos already have hundreds of thousands of views — and help shift public opinion, the ultimate goal of most social-issue documentarians.

As Seftel mentions below, the series is co-produced by Vox and the USA Today Network (with additional funding from other sources); the 15 episodes are available on those companies’ sites, YouTube, the series’ own website, and its Facebook page.

Filmmaker: How did the idea for this project come about? What was the development and production process like?

Seftel: Five years ago, I came across the statistic that more than half of all Americans have an unfavorable view of Muslims. Although I’m not Muslim — I’m actually Jewish — I faced a fair amount of anti-Semitism growing up in upstate New York. So a stat like that felt familiar and upset me deeply.

Part of the equation is that the portrayal of Muslims on TV, film and in the news is so narrow. That’s when the idea for The Secret Life of Muslims came up — a series that would tell stories about Muslim Americans that weren’t being told. Initially funding was hard to come by, but the tone of the presidential race seemed to bring an urgency to the project and things came together quickly over the last year. We released the first episode of the series just a few days before Election Day.

Filmmaker: In the past you’ve made many stand-alone documentaries and series. What is it about this subject matter that lends itself to a serial format? What kind of outreach is accompanying the online release of the episodes?

Seftel: For this series we’ve made 15 short films. Each one is only three to four minutes long and focuses on a specific person — people like NYPD Muslim Chaplain Khalid Latif, author Reza Aslan, and Olympic fencer Ibtihaj Muhammad. The goal was to tell a broad range of stories that represent some of the 3.3 million Muslims in the United States. I wanted the films to be bite-sized nuggets. So when they pop up in your Facebook feed, they’re short enough that you’ll watch and share them. We partnered with VOX and USA Today Network — we intentionally wanted two very different demographics — to try to reach the broadest audience. If someone watching has a friend or relative who could benefit from watching these films, it’s so easy to share them via social media. And it seems like that’s what’s been happening so far. The series has more than 10 million views, and we’ve only released half of the episodes.

Filmmaker: The episodes are simple, built around talking heads, but there’s a lot going on that thematically relates to other things you’ve done in the past. You initially gained attention with a doc about Romanian orphans and since then you’ve made work profiling all different types of people, including those of different races and sexual orientations, children, immigrants, and even scientists. And of course your feature War, Inc. dealt with the relationship between the United States and the Muslim world in the wake of the War on Terror. I wonder if The Secret Life of Muslims feels like another step in a trajectory in your career of showing underrepresented people onscreen? Do you see it relating to what you’ve done in the past?

Seftel: My post-college plans were to become a physician and go work for Doctors Without Borders traveling around the globe saving lives. But right after college, I went to Romania and made the film Lost and Found about that country’s 120,000 orphaned and abandoned children. Besides getting nominated for an Emmy, the film led to the American adoption of thousands of abandoned children. That’s when I left behind my Doctors Without Borders dreams, but I’ve felt an obligation whenever possible to try to make films that have a social impact. Obviously, a good story is a great way to get people to pay attention.

When it comes to the issue of Islamophobia, the story is simple. It’s about humanity. Many people in the U.S. have never met a Muslim — or at least they think they haven’t. So to me, this series had to be simple and straightforward in style. It had to be intimate and personal, and wherever possible, funny. It had to come close to the experience of getting to meet a Muslim. It had to be about hearing from them firsthand. As a filmmaker, I wanted the people I filmed to tell their own stories and speak for themselves. Because when someone looks straight into your eyes and shares their life with you, their dreams and their struggles, it’s awfully hard to deny their humanity.

Filmmaker: The episodes that are online now often address the rise of Islamophobia after September 11, but you mentioned last year’s presidential election and how it affected your fundraising. How else has it influenced The Secret Life of Muslims, if not in content then in terms of its release and relevance?

Seftel: The reports of a spike in hate crimes since the election seem to make our series more relevant than ever. I know that for most Muslim Americans, their lives changed on September 11th, 2001. I don’t think the tone of the 2016 Presidential campaign has made their lives any easier. Perhaps if we do another set of films for the series, we can dig into the impact of the election on individual lives.

Filmmaker: On that note, what kind of role do you envision filmmakers — particularly documentary filmmakers — having in the national conversation over the next four years? Do you think anything fundamental has changed in that regard or that documentarians’ job will continue to be essentially the same? Obviously I’m thinking about the incoming Trump administration, but technology and distribution methods are changing as well.

Seftel: I think if we’ve learned anything from the election it’s that we’ve all been talking in a bit of an echo chamber. And, frankly, I’ve often felt that way about the documentary world in general. What excites me is trying to find new ways to harness social media to transcend partisanship. I believe that if you can find a way to tell stories that give meaning to our lives, people of all kinds will want to watch.

Watch the Reza Aslan episode below, and check out all the episodes on the films’ website.