“On a Picture of this Size, Time and Money Are Your Enemy”: DP Armando Salas on Bitch 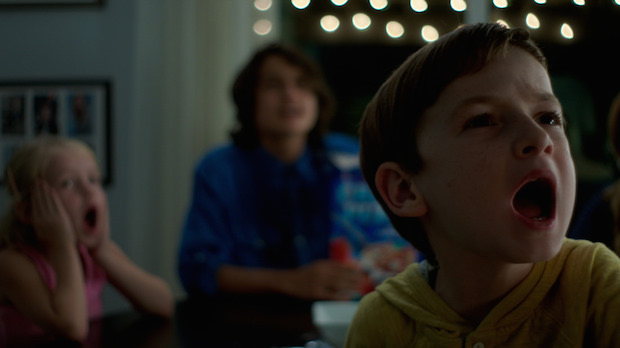 Writer/director/actor Marianna Palka has appeared at Sundance to present a feature (2008’s Good Dick), a documentary short (2014’s The Lion’s Mouth Opens) and to serve as a Sloan Juror. She returns to Park City in 2017 with Bitch, her surreal new film on the crumbling of a nuclear family. Palka hired DP Armando Salas to shoot the film, which stars Jason Ritter, Jaime King and Palka herself. Ahead of the film’s premiere, Salas spoke with Filmmaker about the film’s seriocomic tone, visual influences and its toughest scene to shoot. The film will screen four times at Sundance this year.

Salas: Josh Waller, one of the producers of the picture, thought that I would like the script and be a good fit with Marianna. I really enjoyed how odd and surreal the story becomes while being grounded in a bittersweet tenderness of what it is to be a family. Marianna and I hit it off from the time we met.

Salas: All of the films Marianna referenced have a slower cutting pattern with long masters and beautiful close ups that allowed the actors to be expressive without having to say much. Our goal was to take that sensibility and infuse it with a genre element as the family slips into chaos. When the story takes a turn into the surreal, we also played with giving the image a bit of a dreamlike state.

Salas: The photography of Philip Lorca DiCorcia and Joel Meyerowitz for capturing a timeless feel and the large format polaroids of Sally Mann for color reference.

Salas: On a picture of this size, time and money are your enemy! Luckily we had an amazing cast.

Salas: We shot on an Alexa. The majority of the picture was shot on older funky lenses; a mix of uncoated super speed and standard speed primes, as well as a Kowa spherical. Our work horses were the 32mm, 55mm, and 21mm focal lengths in that order. We wanted to be as close as possible to the actors in close ups to feel the immediacy of their performances, and balance that with tableau wides which Marianna was a huge fan of to allow the scene to develop naturally. The combination of these lenses and the Alexa sensor gave us the creamy, natural skin tones we wanted to capture. Panavision also provided their 19-90 zoom which we used for the beginning of the film and for any VFX elements.

Salas: The lighting had to strike a balance between completely naturalistic and dream-like (or nightmare!). We augmented windows and practical sources and mostly took light away. My gaffer Eric Clark used a selection of LiteMat fixtures near the actors. The dreamlike came from how much we allowed the light sources to flare, and glow the uncoated lenses. My focus pullers Ryan O’Hara and Neil Chartier did an amazing job of dealing with the older lenses and mechanics, as well as pulling focus nearly wide open.

Salas: The most technically challenging sequence was selling the lead character running on all fours at canine speeds down a residential street, completely nude! We played with frame rates and motion blur, while three crew members pushed Marianna on a Western dolly as fast as they could!

Salas: I created a couple LUTs in pre-production which we used for monitoring on set and for rendering dailies so that everyone was on the same page. Taylor Mahony at Tunnel Post put the finishing touches on in the DI. The grade is very filmic and doesn’t stray far from what we were capturing in camera.