A Slice of Southern Life: DP Dustin Lane on Dayveon 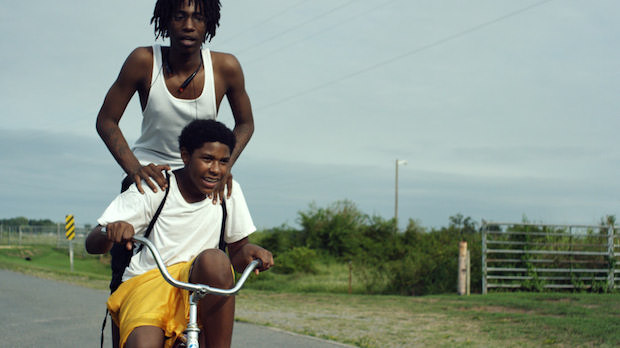 Hailed one of Filmmaker‘s 25 New Faces in 2016, Amman Abbasi makes his Sundance and feature film debut with Dayveon. The film stars Devin Blackmon as a 13-year-old kid coping with the violent death of his older brother in small-town Arkansas. Given the setting, age of the characters and Abbasi’s lyrical approach to the story, the film has strong echoes of George Washington by David Gordon Green, who served as an executive producer here. Below, Filmmaker speaks with Dayveon DP Dustin Lane about his connection to the American South, shooting in a small town and his visual approach to this story.

Lane: Amman and I had a mutual friend in editor Michael Carter. He saw some work of Michael’s that I was involved in and reached out. I think it was important for Amman that I had grown up in the south and had an understanding of the landscape. I immediately responded to the rough drafts of the script/outline and Amman’s previous work.

Lane: I think for the most part I wanted to capture as truly as possible what was being presented to us, be open and reactionary. I do find the region of which I’m from to be beautiful, and wanted to honor that as well.

Lane: We shared lots of references back and forth in the months leading up to production. I think the communication was more about how specific scenes felt and the energy they created more than lighting or specific “looks.” Ultimately, I think the character of the location influenced our path more than anything.

Lane: We had a small though incredibly versatile core group of crew, but we suffered at times from all the things a low budget can bring about. Losing additional crew or extras, locations dropping out last minute. The town in Arkansas where we filmed was very contained, so it was fairly easy if something fell through to quickly repo to another area. We had a running list of moments to explore outside of a scene so we could always be productive if our schedule changed for one reason or another.

Lane: We did some initial testing to find a setup that worked well for us. I think we were both drawn to a more impressionistic look overall. Ultimately though, we just needed a device to record the story that out-shined any technical need or preference.

Lane: When Amman and I first connected in Arkansas to meet and do some preliminary scouting, we walked into one of our actor’s houses around noon. The sun was out, but it was so dark inside. A TV was on, and the house’s small windows let in just enough light to edge people out from the dark walls. Amman said, “I want it to look just like this” and on we went.

Lane: There was no singular pinnacle difficulty that I recall, but there were a handful of times where we lost what little control we did have. Sometimes it was the locations, or the cast, and it would spin in this delirious state for a bit, but I also think some of my favorite moments came out of that.

Lane: I was unfortunately unable to attend the color session as I was out of the country, but overall we had a very close to finished look in camera. I supplied frames for Amman to take in and our colorists Alex Bickel and Mike Howell did an amazing job of leveling and finding the consistent tone throughout.