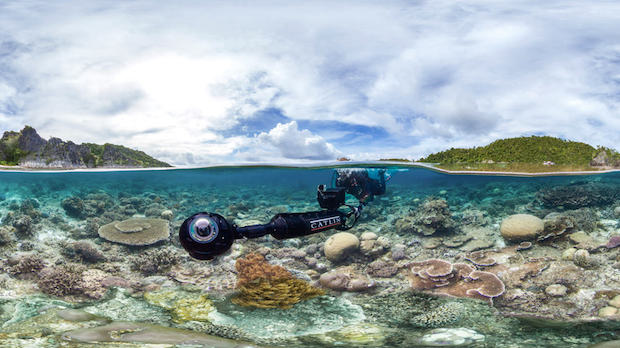 The creators of Chasing Coral had a key goal: to make an environmental documentary with a personal, non-political approach. As editor Davis Coombe tells Filmmaker below, he and director Jeff Orlowski “had no interest in making a political film.” Their film, instead, focuses on the personal narratives of a group of people seeking to capture the phenomenon of “coral bleaching” on film. Ahead of the film’s six screenings at the 2017 Sundance Film Festival, Coombe discusses the task of simplifying a scientific story without dumbing it down. He also lays out how he and Orlowski sought to strip the film of expository passages to create a tone that “feels more like an adventure.”

Coombe: I worked with Jeff on his previous film, Chasing Ice, and it was a great experience. The relationship between a director and editor on a documentary is very intense and when you have one that works it’s very easy to jump on board again. This story is also very important to me as a father and environmentalist, so it was a no-brainer for me to get involved.

Filmmaker: In terms of advancing your film from its earliest assembly to your final cut, what were goals as an editor? What elements of the film did you want to enhance, preserve, tease out or totally reshape?

Coombe: We are telling what is essentially an environmental story but had no interest in making a political film. We were also telling a very technical story about climate science, underwater ecosystems and complicated camera systems and it was a challenge to not get bogged down with all those details. What we focused on was the personal narratives of our characters and telling this story through their experiences.

Coombe: We made sure to use our observational footage as much as possible rather than lean on interviews exclusively to communicate the science in our story. This created a sense that we are following our characters as they learn, rather than “telling” the audience things directly. There is actually a tremendous amount of science in our film but it feels more like an adventure. We also went out of our way to establish our “experts” as people, not just talking heads. You get a sense of what this story means to them personally, why they care about it, and even their sense of humor. By the end of the film you feel like you know them.

We did many small screenings with friends and colleagues and even total strangers along the way. I really believe that this is one of the most important parts of the process. You’ll never learn more about your own film than you do when you are watching it in a dark room full of strangers. Suddenly all of the strengths and weaknesses become obvious in a way they never will in your edit room.

Coombe: I studied film in college and was lucky to get an internship right after graduating where I learned Avid. I was working at a place that did lots of documentary content and got to work on some long form projects early on. I had just discovered documentary and was very taken with the work of Ross McElwee, D.A. Pennebaker, Frederick Wiseman and other filmmakers I had studied in school, so I realized early on that it was a real privilege to be able to do this kind of work. I really fell in love with it and have gone from project to project since then. What I love about doc work is that while the craft remains a constant, every few months I am immersed in a totally different world. I can go from being a jazz musician to a scuba diving scientist overnight. I love it.

Coombe: I use Adobe Premiere because of the flexibility and speed at which I can work.

Coombe: With this film as with a lot of documentaries, finding a way to explain one of our character’s complicated backstory while also moving the narrative forward was a challenge. Ultimately we ended up incorporating most of it into an opening title sequence and finding more poetic ways to explain what got him to where we meet him in our story.

Filmmaker: What role did VFX work, compositing, or other post-production techniques play in terms of the final edit?

Coombe: We don’t have any VFX in Chasing Coral, but it does have a lot of graphics and some compositing. It was another area where we had to include a lot of science without getting bogged down with the details so we had a little fun with it in places.

Coombe: It’s easy to lose your objectivity when you are focused on specific scenes and the small details of a feature film, but as I type this I am sitting in our mix and seeing our final picture and score come together as our amazing re-recording mixer makes his way through the film and I am reminded of how important this story is and how proud I am to have been a part of telling it. Making films is really a privilege.