“How to Sell the Outrageous Premise of the Film”: DP Quyen Tran on Deidra & Laney Rob a Train 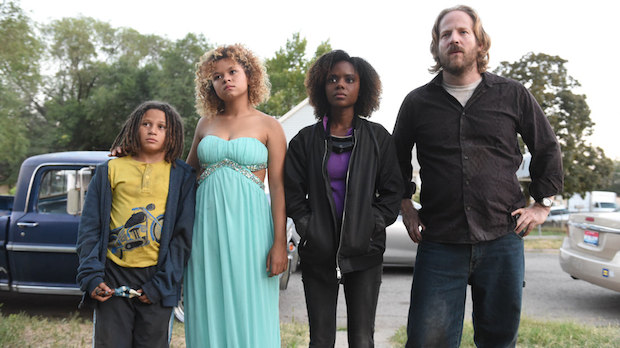 A pair of teenage sisters resort to train robbery to raise bail money for their mother in Deidra & Laney Rob a Train, a new comedy from director Sydney Freeland. Freeland returns to Sundance with her second feature after 2014’s Drunktown’s Finest, which debuted in Utah before earning a number of festival awards. Below, the film’s DP Quyen Tran (Pali Road) discusses the influence of the Coen brothers, filming on a moving train at night without any lighting and grounding an absurd story in naturalistic visuals. Deidra & Laney Rob a Train premiered at the 2017 Sundance Film Festival and will be released by Netflix on March 17, 2017.

Tran: When I got the script for Deidra & Laney, I had just returned from shooting a film in Italy and was hoping to find a project in Los Angeles. But I fell in love with the story and decided to interview, and ended up really liking the creative and producing team. So when I got the offer I had to say yes.

My background in indie film, working at a fast pace with limited resources, made me a good fit for the project. Additionally, the film was to be shot entirely on location in Utah, and because of tax incentives I was only allowed to bring one person from my LA team. Luckily, location shooting is something I’ve done multiple times, so the producers were confident I could find an excellent local crew.

Tran: The director and I discussed each character and their story arcs – how they grow and become stronger women throughout the film. Working closely with the production and costume designers was integral in achieving the right palette for every character. Deidra’s life is always in motion, going from taking care of family to tutoring students whilst maintaining her own status as valedictorian, so I used Steadicam to navigate her through very tight, practical spaces. I credit my operator, Chad Persons, in helping pull off moving masters in tricky locations, as there was no stage work. Laney’s character, on the other hand, is always overlooked, until she eventually finds her spotlight (literally). So until she discovers a true sense of herself, we framed her to become part of the background, blending her wardrobe and even her hair and skin with the set design, whenever possible.

Tran: Sydney and I talked extensively about how to sell the outrageous premise of the film – two high school girls who rob trains to bail their mom out of jail. We used Raising Arizona as one of our influences, both tonally and visually, because the Coen brothers are masters at grounding characters no matter how outlandish their situation. It was a balancing act, to be sure, but by keeping the visuals realistic, we created a world where the audience could actually believe these two girls could pull off robbing trains.

Tran: When I found out the budget and the limitations of our train locations, my jaw dropped. We had to film on a moving train at night without any lighting, which seemed impossible. We considered drones and balloon lights, but the budget couldn’t support them. After shooting some day-for-night tests, we ruled out that option as well. Finally, I thought we could use headlamps and flashlights held by our actors as our key light sources to overpower any ambient moonlight I could muster. And even though we couldn’t light the passing landscape, we searched for distant points of light along the train route, so we could have some frame of reference that we were actually on a moving train. For the closeups, I framed the dark night sky in the background and used a fan to simulate wind. Hopefully, you can’t tell what we shot practically and what we shot poor man’s process!

Tran: I’ve shot most of my feature work on the Alexa, but it wasn’t a Netflix-approved camera system. Therefore, I ended up choosing the Red Epic Dragon for its 4K capability. Since I knew we would see light sources in many of the shots at night, I shot flare tests with a multitude of lenses available in Utah. The director and I both liked the look of the Cooke S4s, which I’ve used dozens of times, and since they open up to a T2 I knew that would be sufficient for night work.

Tran: My general approach is to light the environment, as opposed to lighting faces. I like to see a character walk in and out of darkness. Since we shot in very tight locations, this approach became a necessity. Since I wanted to shoot 360 in many scenes, I would light through the windows and sneak a light or bounce just off camera. All our actors are gorgeous, but because of the wide range of skin tones I sometimes had to boost my fill light or create negative fill, which was tricky because of the wide lenses and framing I used for this film.

Tran: The trickiest scene was the finale where Deidra climbs atop a boxcar to escape Tim Blake Nelson’s character, who sprints after her across the roof and down a ladder. This was a night exterior with stunt doubles, so I wanted to make sure the actors had enough light to safely perform, but also make it feel perilous. To embrace the production value of the location, we lit the entire train yard with two Maxi Brutes on a condor, and designed a shot with a 25 foot jib arm and Steadicam. Working closely with the stunt coordinator and our awesome stunt team, we shot first team with a running Steadicam beginning the ascent up the boxcar, then cut to the stunt performers running across the roof using the jib arm from behind. Then, we shot first team again descending from the boxcar for the final jump. It took a lot of coordination between many departments, but it pays off in the final edit.

Tran: Since you never know whether you’re going to be available for the DI, I always try to bake in the look as much as time permits. That way, I have more time to make finer adjustments in the coloring suite as opposed to the broader strokes. I am also a stickler when it comes to preserving highlights, so I maintain as much latitude as possible in my exposures so I can have the option in the DI if I decide to push the curve.