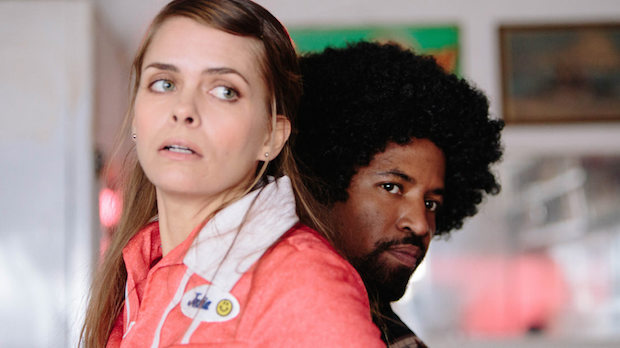 Saschka Unseld and Lily Baldwin explore the phases and facets of love in Through You, a dance-infused VR piece that premiered at the 2017 Sundance Film Festival. Unseld is an animator who directed the Pixar short The Blue Umbrella and is a cofounder of Oculus Story Studio, a VR media company. Baldwin arrived at filmmaking by way of dance, having worked with everyone from the Metropolitan Opera Ballet to David Byrne. As a creative challenge, the two decided to edit Through You themselves. Below, Unseld and Baldwin discuss the roughly 150-200 hours they spent editing a 14-minute VR experience.

Baldwin: We nominated ourselves for this job. The premise of this project was about breaking all rules and not knowing anything. We didn’t want someone who “knew how to edit VR” – we wanted to find something fresh by messing around. We also could only ask ourselves for this kind of time commitment.

Unseld: The only true way to explore, discover and learn is to get your hands dirty. VR puts us all back into film school, but without the teachers and books and movies to look at for guidance.

Baldwin: We moved the camera a huge amount on set, and explored loads of cutting options that wouldn’t make the viewer nauseous with all this movement. Cutting on action and a meticulous attention to matching offsets in 360 made this possible.

Unseld: It’s VR, so we knew that we didn’t know what works and what doesn’t. We knew we needed to find and discover it in the process. So we made sure that on set we do a lot of experimentation. We were running these 15-minute takes full of time experiments and exploration. The edit process was about finding what turned out great in there and what turned out horrible. What was VR, in a way we hadn’t seen before, and what was just a poor copy of “film think.”

Baldwin: We developed an interesting tag-team approach where we literally edited on top of each other’s works in specific sequences (which is also how we write). For example, I might pick selects and build a loose long scene. Saschka would come in with structural arc suggestions. I would come in with minutia edits and relationships between bodies from cut to cut. We kept going back and forth and finally stopped when we ran out of time.

Unseld: And in the end it was just about doing the work. Between the two of us we probably spent somewhere between 150-200 hours editing the 14 minutes that Through You is.

Baldwin: As directors, we both taught ourselves because we like to try all options to find what something needs to be. Not everyone works like that (it can be crazy-making). This gave us freedom to find the story – to be able to handle it ourselves first.

Unseld: For VR my thought process for editing is a more associative one. The flow of narrative in VR is more lyrical in the way that poems or a beautiful piece of prose works.

Unseld: Premiere with the GoProVR plugin for realtime VR viewing.

Baldwin: Jumping from young Julie to old Julia, and how to earn a new actor on top of jumping 35 years in set – without losing the audience along the way! Gulp.

Baldwin: A load. Saschka is hugely experienced here and this was a great learning for me.

Unseld: We had a few VFX shots that were created by The Endless Collective. VFX for VR is enormous amounts of work and we had super rough work in progress shots during the edit if at all. Patching these moments up with sound that represents the VFX was immensely helpful.

Baldwin: I rarely shoot/capture what I thought I would – and I always see my footage differently when it’s actually on my screen (versus in my head). Often I find myself building something new in my edit. At times I thought that wasn’t rigorous enough (that a good director grabs everything and no more than what they set out to do) – but for me it’s a matter of engaging the medium of cutting (along with improvisation on set) and using it as its own tool. I like to cut things up and rearrange, especially after years of performing when I couldn’t play with time. VR is its own beast. We couldn’t watch playback on set. I’ve also never edited with a headset (which becomes this athletic feat of on/off keyboards/watching). There are so many options inside 360 degrees, I found myself thinking not only about where the viewer was looking but how I wanted them to move. When were they disoriented and when they were “looking where they’re supposed to” – which frankly isn’t even really a VR sensibility, because 360 is about free range and making choices inside of space. Lots of meaty food for thought. We have a whole plan for dance in VR – more more come soon!

Unseld: We discovered so many fascinating things about VR in the process of making Through You. That is what exploration and discovery is about. Of course, not all of these fit into our narrative of Through You, so we left a lot of them on the wayside. I can’t wait to apply them to future projects though. But for now, after having been so deeply immersed and gotten lost in this project for so long, I’m looking forward to share it with the world. We’ve set out to experiment with some pretty bold things and to break a lot of VR conventions with this project. It’ll be interesting to see people’s reactions.