“How Do You Show Something That Isn’t There?”: DP Sam Painter on Water & Power: A California Heist 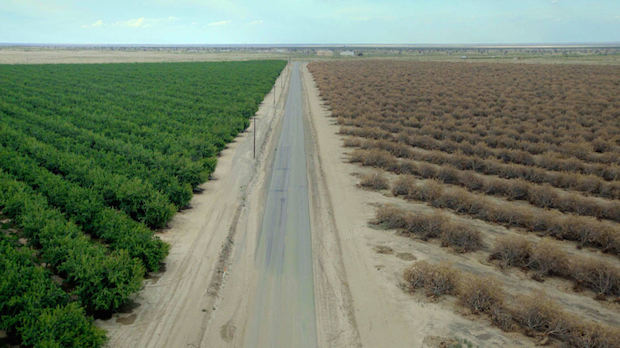 The story of California is indelibly tied to water. Marina Zenovich, the director of well-received docs on Roman Polanski (Wanted and Desired) and Richard Pryor (Omit the Logic), explores this relationship in Water & Power: A California Heist, which screened in competition this week at the 2017 Sundance Film Festival. Her film investigates the state’s ongoing water crisis with an emphasis on Chinatown-esque corruption. Zenovich tapped DP Sam Painter (Going Clear) as one of two cinematographers for the film. Painter spoke with Filmmaker ahead of Water & Power‘s premiere about the film’s blend of hand held footage, dramatically lit interviews and drone imagery.

Painter: Water And Power: A California Heist is a Jigsaw Production. I have had a long relationship with Jigsaw. The most well-known of their films I was the DP on is Going Clear, which was at Sundance two years ago, but I have worked as a DP on over a dozen Jigsaw Films.

Painter: Our film is about the California drought, water rights and who owns them. Water and the California Central Valley are the main characters in this doc. How do you show something that isn’t there? That was one of our biggest concerns. How to show that the ground below you doesn’t have any water in it or is a lot lower than it ever has been before. That is hard to do, of course, because you can’t see it. So we had to use more visual elements, like lakes and reservoirs that are lower than they have ever been, dead plants and dried up dirt. All the while, people who own the water are watering their crops nonstop.

Painter: A lot of the film is handheld, which gives the viewer a more intimate feel so you would have more compassion for the victims of this water shortage. I also wanted to make the interviews more impactful, so I lit them pretty dramatically. I also knew from the onset that drone footage was going to be imperative. We are basically in the desert growing food. There isn’t anyway to get a true perspective without getting a camera in the air. Then you can truly realize how large a problem the lack of water can be. It gives the viewer a unique vantage point.

Painter: The film Chinatown is the first thing that came to mind for the director and myself as an influence. I also looked at high altitude photography that showed dried up lake and river beds. The photos are beautiful and very abstract. Some of those made it into the doc. You aren’t really sure what you are looking at. Whether they were painted or photographed. I love not being able to tell what something is at first glance. It gets your attention and makes you think.

Painter: We shot in the middle of the summer. So the days were long. The best light is at sunrise and sunset, so we had a lot of 18 hour days.

Painter: This film was mostly shot with Sony F55 cameras. Some sections were shot with an Amira, Mini, C300 and a Sony A7sII for car mounts. And of course a lot of drone footage. I like the F55 for hand held work because of its size and ergonomics. We were shooting in cars and trailer park homes. The footprint of the F55 is very small compared to some other cameras out there. I keep it pretty stripped down for hand held as far as gear on it. Matte box, wireless audio and TC links, wooden handle, battery that’s it. Lens wise for hand held work I shot mostly with a Nikon 17-55 2.8 zoom lens. It’s not par focal so that’s a pain, but it’s sharp, small and lightweight. I was pulling my own focus so that lens is easy for me to work with. I also used a Canon 30-330 as well as some prime lenses. I used a lot of Nikon DSLR lenses because of size and weight.

Painter: It’s a doc, so most of the film was shot with available light, except for the interviews. For interviews I usually light pretty dramatic, but soft and natural looking….hopefully. I just prefer that look. It gets your attention. Some were done in mobile homes with limited space and electricity so we had to light the interiors through the windows from outside of the home. Mostly with K5600 HMIs and LED panels.