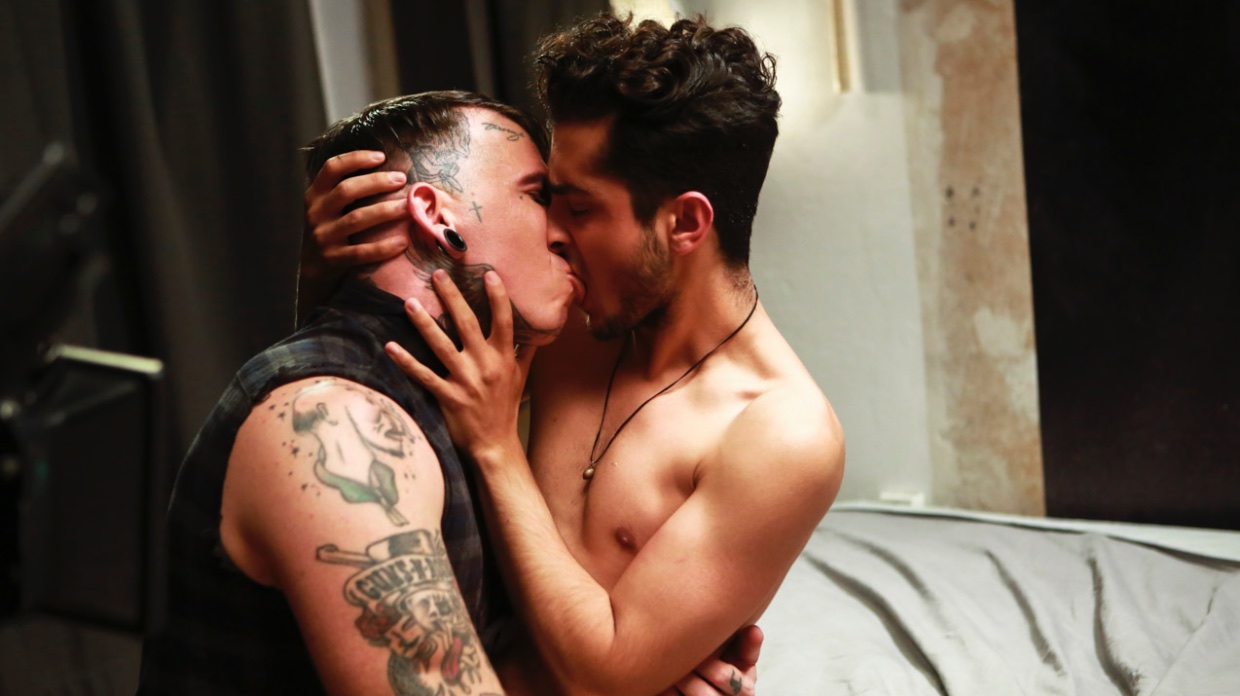 by Lauren Wissot
in Directors, Filmmaking, Interviews
on Mar 9, 2017

Bruce LaBruce is one busy renaissance man. The queercore icon — director of 11 features (not to mention numerous short films and music videos, and several theater works), visual artist and author — has now teamed up with Erika Lust’s XConfessions to release Refugee’s Welcome. The story of a Syrian refugee in Berlin who both suffers a hate crime and finds a poetic (and explicitly sexual) connection with a Czech punk, the short will be available on Eroticfilms.com (NSWF link, obviously!) on March 9th. (And today only for free — use the code BRUCE).

Filmmaker spoke with LaBruce — who makes mainstream and hardcore versions of his films — fresh off the Berlinale premiere of his most recent feature, The Misandrists.

Filmmaker: So what inspired this unorthodox approach to the refugee crisis, and why release the film through XConfessions?

LaBruce: Genre matters! The fact that my film is sexually explicit and pornographic makes the audience look at refugees in a different way. There are quite a lot of gay refugees from Middle Eastern countries because the more autocratic and conservative these cultures get, the more homophobia there is, and the more dangerous it is for queer people. But refugees shouldn’t just be depicted as victims or objects of pity. They are also sexual and emotional beings, leaving behind family, careers, lovers, etc. In my film, both the Syrian refugee and the Czech punk that he encounters and has sex with are poets. They find that common bond, reading their poetry to each other in their own languages even though they don’t understand the words. They share a common feeling and bond that transcend their cultural differences.

Filmmaker: Since your career has spanned decades, not to mention mediums, I’m wondering what you think are the pros and cons of making art in the digital age. (I noticed you crowdfunded your latest feature, The Misandrists, which just premiered at the Berlinale.)

LaBruce: I started out as a filmmaker making movies on film. My first feature, No Skin Off My Ass, was shot and edited on Super 8, and my second and third features, Super 8 1/2 and Hustler White, were shot on 16mm. Hustler White was the first film I edited on digital, using a crude software at the time called D-Vision. Subsequently, I mixed film and digital in my films Skin Flick and Otto; or, Up with Dead People (the latter shot on both super 16mm and HD). My latest features, Gerontophilia and The Misandrists, were both shot strictly on HD digital.

I struggled with the video and digital aesthetics for many years, often trying to make the works look like film, rather unsuccessfully. Now, looking back, I quite like the digital aesthetic of those films, which now look somewhat crude but exotic — an early digital porn aesthetic. But with the advancement of the technology, it’s amazing to me what you can do with digital. The Misandrists was shot with a very low budget, composed of an advance from a German distributor, some financing from Medienboard, a governmental film-financing agency in Germany, and from a Kickstarter campaign. We didn’t have the greatest camera, but my usual DP, James Carman, with whom I’ve worked on six films now, really knows how to maximize what we have to work with. We shot on 4K with the Sony FS7, which really gave us a lot of leeway in editing. Because you can punch in up to 50 percent without losing resolution, you can change up the frame a lot and crop out the various mistakes you end up making when you are shooting a 90-minute feature in 11 days.

Software that smooths out bumpy tracking shots is also enormously helpful. Color grading has become more and more advanced, to the point where we could make a low-budget digital film look like a medium-budget movie shot on film from the ’70s. As Werner Herzog said recently, you really can shoot a feature film now for $10,000 if you really want to or have to. You still have to beg, borrow, and steal, but the technology is there.

Recently, the Frameline festival in San Francisco told my producers that they couldn’t show my film The Misandrists because it’s a film about lesbians directed by a gay man! So not only hetero-normativity, but also homo-normativity and political correctness put limitations on filmmakers. A film like Moonlight, which is incredibly impressive, still has to tone down the (homo)sexuality of the story, almost to the point of absurdity, to cross over to a wider audience. However, it’s not just the sexual explicitness of my films that limit their wider appeal. My films are also politically challenging, calling into question the dominant order, and they also often contain anti-capitalist political diatribes or (wo)manifestos – which are apparently more offensive to most people than blowjobs!