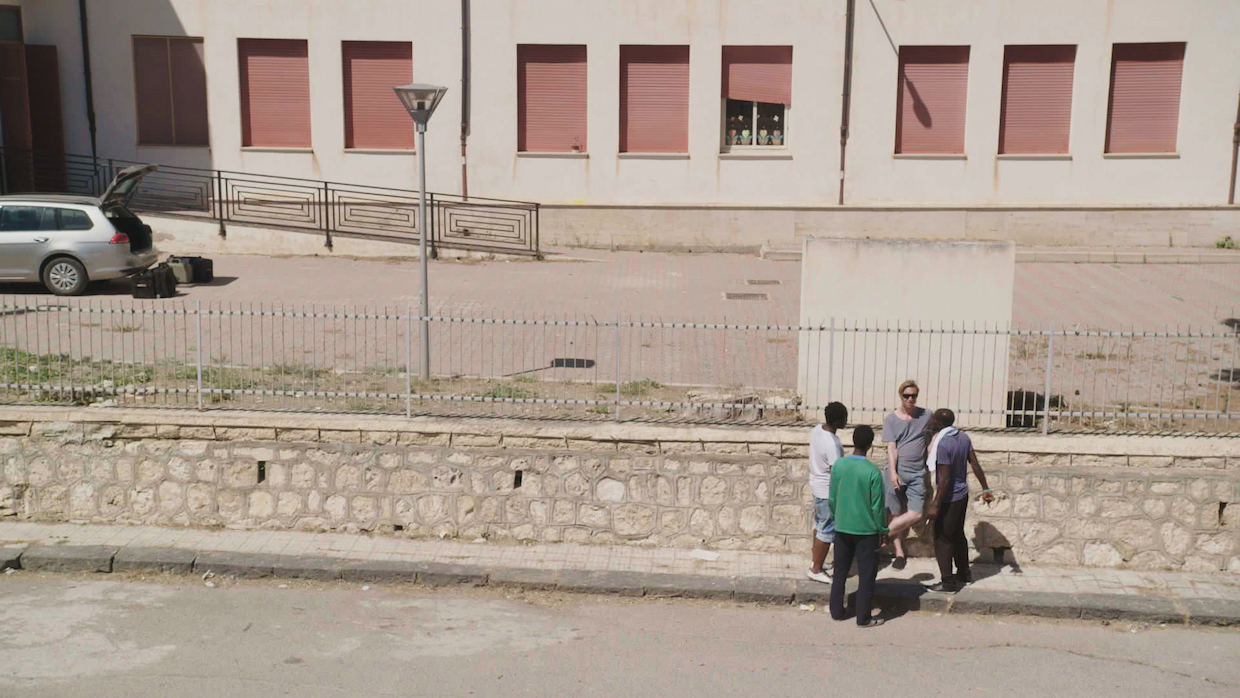 Carmine Grimaldi, Deniz Tortum, Did You Wonder Who Fired The Gun?, Guido Hendrikx, If Only There Were Peace, Stranger in Paradise, Travis Wilkerson

This was my eighth (!) year attending the True/False Film Fest, and the first during which I wasn’t in a continuously 100% optimal mood — not the festival’s fault, attributable instead to the foul ambient fug emanating from the White House. I’ve written about my skepticism/aversion towards the “now more than ever art must lead the resistance” school of thought and was in no mood for any such films; instead, I was jolted by a series of works about the frequent futility of such practices.

Carmine Grimaldi and Deniz Tortum’s half-hour If Only There Were Peace is a documentary about making a narrative film, with structural debts to Kiarostami and Panahi’s meta-textual refractions of tragedy and/or filmmaking. Two rifle-bearing soldiers enter a bedroom, wake two sleeping men and demand to see their documents; the tension is not-quite-dispelled when the gunpoint-interrogation pretense is dropped and revealed as a joke (!). Next, a stilted dramatic scene of a Turkish villager and his wife standing their ground against a soldier demanding they surrender their son, eventually with a cut further back to show that this is a set for another film, one not of Grimaldi/Tortum’s making. The shoot progresses slowly as the Turkish director demonstrating hammy line readings for the non-plussed non-actors.

By this point the lines between “fiction” and actuality have stabilized, and the film detours to a interview sequence where the first scene’s sleepers are interviewed about their Syrian refugee status. Are they impressed by movies about their plight? Not one bit, says one: it’s all talk and no action (“Syria has been destroyed by Turkish soap operas”), presumably well-meaning but so useless as to be an insult. In fact, the refugees are on the same page as the Turkish director, who tells the documenatarians’ camera that “God willing, what we do here will foster peace […] But I don’t think so.” In an end-credits-text twist, we learn that two months later the company responsible for this and similar activist productions was shut down after it was discovered they were helping ferry migrants and got in debt with the Turkish mafia; all that bluster about Leading Through Art was a cover for practical action, and not a terribly successful one at that. Greased along by the playful skill with which scenes are repeatedly recontextualized, If Only There Were Peace builds to a self-indictment of its own practical uselessness. The title comes from a scene in the failed narrative, in which non-actors confronted with their “dead son” repeatedly recite it: the more the faux-powerful bromide is heard, the clearer the failure of the magical thinking that empathy will save us.

Guido Hendrikx’s Stranger in Paradise is an even more radical shape-shifter. A zippy montage prologue establishes an effective analogy between the refugee crisis and nothing less than the entire history of evolution and global dispersion of human life. Then we’re placed in a classroom for three labeled acts with one European instructor (Valentijn Dhaenens, scripted actor) vs. a room full of (non-actor, non-scripted) migrants in bruisingly direct sessions. “You are not welcome,” he says unambiguously. “We don’t want you here.” As soon as those words dropped, I thought of Malcolm X: “South Africa preaches separation and practices separation, America preaches integration and practices segregation. […] I have more respect for a man who lets me know where he stands, even if he’s wrong, than the one who comes up like an angel and is nothing but a devil.” There’s a bracing, hateful clarity in someone who’s willing to say exactly what they mean, even/especially if it’s vile. Is the instructor saying what he feels in his bones, or merely being ruthlessly tough-minded in summarizing the prevailing political climate for a group of people who need to know what they’re up against?

After mastering montage and close-quarters conflict, Stranger closes strong in a new mode with a super-long (both distance/time) shot epilogue; now “out of character” on the street, Dhaenens meets a group of migrants who ask for cigarettes. Given what we’ve been watching for an hour, the suspicion that they might take violent, understandable revenge on the outnumbered teacher (thereby setting up any number of racist headlines about migrants running wild) lurks, but instead everyone has a nice chat. By the time Dhaenens points back to the director behind the camera it’s increasingly clear that this tableaux as staged as anything in the film (for this sequence, the migrants wrote their own dialogue). Here’s another film that summarizes with great clarity a particularly sordid/inhumane strain of contemporary thought it’s attempting to combat, while at the same time pointing out how unhelpful the film itself is in effectuating change.

If you want it even darker: Travis Wilkerson’s Did You Wonder Who Fired the Gun? is a live performance (which will be converted into a film) in which Wilkerson sits onstage in front of a mic and table under a bare spotlight like a comparatively narcotized Spalding Gray, cueing and narrating assorted stills and video clips from a laptop and iPhone. A longtime filmmaker of impeccably established way-left-of-center ideological convictions, Wilkerson tells the story of investigating  how his great-grandfather S.E. Branch killed (and was not indicted for the death of) Bill Spann, a black man. That this happened in 1946 rather than now isn’t terribly comforting, as opening scenes of protests in the wake of George Zimmerman’s acquittal remind anyone who somehow managed to forget. How to try to exorcise the taint of systemic racism intertwined within one’s personal family history is a very real and tough question — the answer may be that there’s no real way to do it.

Gun covers a lot of (literal) ground, including scary brushes with Southern white supremacists (Wilkerson’s aunt got in deep a while ago) and attendantly vile footage from their websites with lots of talk about “heritage” et al. To combat their voices and make sure the director’s white voice isn’t the most dominant in a story of black oppression, the most continuous speaking time is accordingly given to black civil rights activist/politician Ed Vaughan. Nonetheless, Wilkerson’s opening claim — that this isn’t a white savior narrative but a white nightmare story — comes into direct conflict with the climax. Throughout, the narrative is punctuated by a recurring song in which the names of the recent prominent dead at the hands of white authorities (Trayvon et al.) are chanted out, followed by the repeated injunction “Say his/her name.” The final sequence adds the forgotten, barely documented Spann’s name to the roll call, with the mic turned towards the audience in an invitation to join in. Even while reclaiming a forgotten piece of history, Wilkerson’s anguish as someone desperately aware of his family history and inability to truly rectify same makes a greater impression than any potential momentary catharsis. But does the gesture itself backfire in a plea for applause and forgiveness? I’d argue that unambiguous, bracing self-excoriation productively and sincerely shows how the inability to really do anything with that testimony. It’s the screening that prompted the most arguments about whether Gun succumbs to the white savior trap it explicitly wants to avoid, but either way it’s not likely to be very comforting for anybody, which is a good thing.