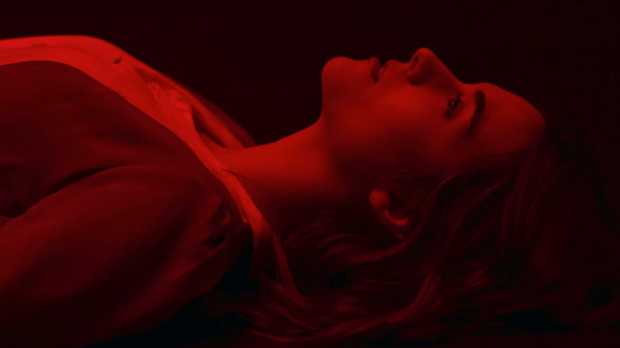 Most of the conversation surrounding Blame, a new film by writer-director-producer-editor-star Quinn Shephard, focuses on her age. At 22, she seems exceptionally young to be undertaking so many roles on a debut feature, but the results attest to her talent and drive. It should be said upfront that Blame is a poignant and incisive examination of modern American adolescence, as filtered through the lens of Arthur Miller’s The Crucible and the Salem witch trials of 1692, which form the inspiration for this modern-day narrative. The film delves deepest into high school mean-girl culture — with excellent performances by Sarah Mezzanotte and Nadia Alexander, who actually has arguably the most complex and pivotal role (update: and who was awarded the festival’s Best Actress in a U.S. Narrative Feature Film award)–but also looks at mental illness, parenting, abuse, and both teen and adult sexuality. Quinn plays Abigail, an ostracized girl with a history of mental illness (the film’s equivalent to witchcraft) and a preternatural ability to act, causing her to get cast by a substitute drama teacher (Chris Messina) in a class production of Miller’s play. The two initiate a terse and tentative romance, with the threat of disaster looming at every moment, but it is Abigail’s relationship with her peers that remains most important to the story Quinn wants to draw out of her source material.

Filmmaker: The Crucible is a fertile source for inspiration. Where did the idea for your story come from and what was the writing process like?

Shephard: I did a production of The Crucible when I was 15, and was immediately enamored with both the play and the complexities of Abigail Williams. Playing such an adult role at a young age had an immense impact on my own confidence and view of myself. It was the first time I was able to explore such an adult part, and in a lot of ways it was very validating, both as an actor and as a young woman. Abigail was innately tied into my own coming of age. When the play ended, I didn’t want to let it (or her) go, and so I began writing Blame. In many ways, it was a coping mechanism for me. I was able to hold onto a feeling I had grown so attached to. And Blame in turn grew and grew into the strongest attachment for me, so much so that I devoted years of my life to writing and rewriting — and then producing the film alongside my mom. The progression of Blame truly mirrored my growth as an artist.

Filmmaker: The title Blame obviously ties in closely with the idea of a witch hunt; how easy was that to transfer to a contemporary high school? You’ve also focused on the concept of an illicit teacher-student relationship, taken from Abigail’s relationship with John Proctor. What did that bring to your story?

Shephard: I think the concept of a witch hunt is tied innately into close-knit communities. A small suburban high school is the perfect breeding ground for rumors and accusations. When you’re a teenager, you’re just itching for excitement. Everything seems incredibly important and weighty. If a text message can set off days of whispers and conflict and he-said-she-said’s, an illicit relationship (or even the suspicion of one) would surely blow up.

Filmmaker: What was it like directing yourself? You’ve acted prolifically and you directed the short Till Dark in 2015, but what was it like combining those two functions on your first feature? How did your collaboration with your DP Aaron Kovalchik affect the process?

Shephard: Directing and acting simultaneously was very challenging — more challenging than the actual act of directing myself. I always had my mom on set, and she kept a close eye on my performance, but it was difficult for me to keep tabs on everything else. I’m much more comfortable behind the camera on my shoots. Luckily Aaron and I had a chance to map out the entire film ahead of time; we spent two weeks shot listing and blocking every scene. I had a stand-in on the shoot so Aaron and I would set up the shot together, I’d watch a camera rehearsal, and then I’d jump in and do it myself. It was hard on days when we were shooting with two cameras in the classroom — I’m a very hands-on director, and I like to tweak even tiny details of a performance to bring out the best version of the scene. Sometimes I could barely look at my actors because I was on camera myself, and we wouldn’t have time to watch playback. It was crazy. Luckily my cast is incredibly talented, each and every one of them. It would have been an impossible feat if I didn’t trust them as much as I did.

Filmmaker: You also produced and even edited the film. Was it difficult in the editing room to distance yourself from the material and remain objective about your performance? What advice would you give someone taking on as many roles as you did here?

Shephard: I think as far as advice, that’s very unique to each director. I personally love editing. I don’t see myself as myself when I’m editing, if that makes any sense. I’m able to detach and concentrate on the overall film, I don’t think about my own acting any differently than the other performances. I think some directors edit their own work because it’s innately a part of their vision — others need someone else as a sounding board to bounce ideas off of. In my case, I wasn’t alone. My mom sat in on almost all the editing sessions. We held test screenings. Nadia (Alexander) even got in on the process — I taught her how to sound mix while we were working on my temp score! It was so important to hear other reactions to the film, but at the end of the day I was so happy I was the editor (even though it terrified me at the start). We were seeking such a unique tone that could have easily leaned more into comedy or melodrama, and I was happy to be the person to maintain control over that.

Filmmaker: What’s next for you? Are you anticipating more directing work along with your acting?

Shephard: Of course! I think it’s pretty clear that Blame is a showcase for my directing more than my acting. I do love acting and plan to continue, but directing is what I feel I was born to do, and I hope to spend my life creating films that mean as much to me as Blame does. There are so many important stories I want to tell, and I think this film is a great example of who I am — and who I will grow to be — as an artist. I am so thrilled to see how it’s being received by the world!