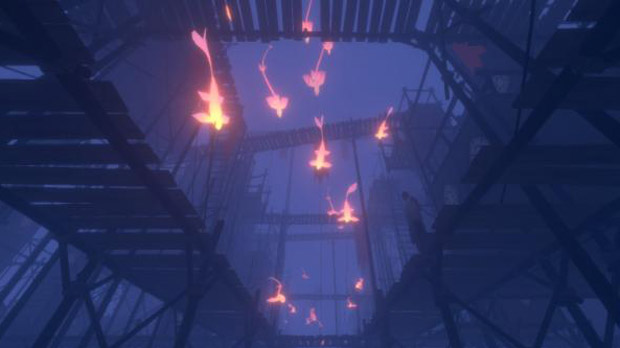 In the three years since its founding in 2014, San Francisco-based Kaleidoscope has made itself a major player in the virtual reality landscape. The company began by hosting exhibition events for new VR pieces—like Joost Jordens’ and Mike von Rotz’s Transition (pictured above)—which they’ve done now more than 40 times across the world. Now, with major film festivals like Sundance and Tribeca increasingly filling that need, Kaleidoscope has turned its attention to production. Late last month the company announced the launch of a funding platform to connect independent VR creators with the financing sources that could fund their work and potentially turn virtual reality into a more consistently robust investment.

The new project is another step for Kaleidoscope from exhibition to production. The company has already executive produced various projects like Mad God and Testimony and run a month-long version of a hackathon with Oculus, called DevLab, to develop new virtual reality work. Recently it worked with 1stAveMachine in a project funded around $3 million to foster relationships between VR creators and funders; this new, much larger, venture could be seen as a more stable and permanent version of that effort. “Time and time again,” Kaleidoscope CEO René Pinnell told me, “artists tell us that the number one ‘hair-on-fire’ problem they face is funding — or, rather, the lack thereof. And that’s the genesis of our idea to build a funding platform for premium VR content.”

It’s not that VR funding has been nonexistent; rather, funding is at least relatively abundant but remains spread out between multiple funding entities, making it difficult for VR producers to navigate. As Pinnell says, “To date, most of the funding for original VR projects has come from the major HMD manufacturers — Oculus, Vive, Samsung, and Sony. However, Kaleidoscope has identified more than 100 other companies and organizations who are actively funding VR content and, while individually their budgets are relatively small, when we bring them all together it can have a major impact on the funding landscape. And that’s what we aim to do. Kaleidoscope’s role is to get all of these industry players on one platform to better coordinate their support for the most talented VR creators and studios.”

Here’s how the new platform works. For a $199 monthly fee up to 100 funders are able to subscribe to Kaleidoscope’s service. For that fee they’re given first-look access to new projects curated from leading festivals, established producers like Baobab, and new creators, including independent individual artists. They also access a library of finished projects that currently numbers over 100 titles, all ready for licensing and distribution. They’re able to acquire rights for certain VR properties or build relationships with VR creators over many titles, investing in both their current and future work. For an additional fee funders can receive more personalized service and assistance to access those content creators who most closely match their funding goals. Pinnell’s long-term vision for the platform is for most, if not all, funders to view Kaleidoscope as a reliable curator of the best creators who stand the greatest chance for a return on investment or innovative artistic creation. They want it to be a one-stop shop for those with funds to find the best way to use them in the developing VR marketplace.

Conversely, Kaleidoscope hopes to be a place where VR creators, even independent artists working out of their own living rooms, can congregate to find the funding that will further their careers. This is accommodated mostly by the fact that for content creators there is no application or subscription fee — for them, the service is free. Virtual reality creators can apply to join the platform by submitting project proposals on the Kaleidoscope website. Past work in VR is important but not a determining factor. “We look for artists who show a mastery of both the creative and technical sides of virtual reality,” Pinnell says. “We value craftsmanship and originality. We select creators and projects that show us something new.”

Pinnell sees the current platform as a step toward a future when VR is much more ubiquitous. “In four years virtual reality will be a mainstream technology with an audience of over 50 million in the U.S. The cost of a high-end VR system will drop to below $600, making it accessible to a much larger audience, and the visual fidelity and comfort of the device will dramatically increase.” And while it’s difficult to predict specific ways in which VR and AR will evolve, Pinnell does know that he wants Kaleidoscope to be at the center of the industry. “In four years I believe that the majority of VR films, games, and experiences will be financed on Kaleidoscope’s platform. We will have 100,000 members and be the dominant professional network for the VR entertainment industry.” While this is an ambitious goal for the company, at present it looks like the new platform, now already a few weeks old, can be a great tool for VR creators at any stage in their careers.