Through You: Stopping and Feeling Through Dance and VR 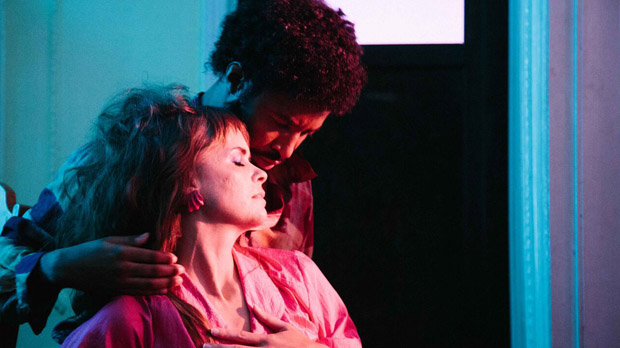 by Randy Astle
in Directors, Filmmaking, Interviews
on Aug 15, 2017

Although dance and virtual reality seemingly lay at polar ends of the creative spectrum, they can come together to make incredibly moving artistic experiences. That, at least, holds true for co-directors Lily Baldwin and Saschka Unseld in their new piece Through You, a VR film heavy on physical choreography that premiered at Sundance earlier this year and on August 1 was released on Samsung Gear VR via the Oculus Video app. The piece features a couple as their relationship evolves over the course of decades through discovery, fulfillment, loss and rejuvenation. It uses handheld camera movement to create a very visceral experience, one that Baldwin, a professional dancer and choreographer turned filmmaker, and Unseld, a director and co-founder of Oculus Story Studio, developed with their cast and crew through an iterative process of creation much more akin to traditional choreography than filmmaking. Filmmaker spoke with the directors about the piece’s postproduction process when it premiered in January, and now with its public release I revisited some of its most important aspects with the directors.

Filmmaker: Why do this? And why do this now?

Unseld & Baldwin:​ We’ve often asked ourselves: Why bother with our personal ideas when the world climate is in such a crisis — what does “art” have to offer? We’ve come up with this answer that we keep mulling: Bodies connect us. We all have one and we all speak that language. During a time with so much polarization afoot, this is what we need most — to feel our own body in relation to others. In ​Through You we are investigating themes of intimacy and mortality, wanting to put ​you, the viewer, through a meaty collection of sentient moments. We want to ignite ​your feeling. We both come from seemingly opposite worlds — tech and dance — and we wanted to combine these seemingly disparate worlds to create something fresh, that didn’t fit in a box and challenged people to question their assumptions around “what can be done” in VR. Through You is a wake-up call, a call to action inside a rapidly developing tech world that dares us to remember our body: to stop and feel. It’s imperfect and full of questions. We love that their are multiple interpretations, and want to encourage each person to claim their own narrative defined by their own literal experience.

Filmmaker: The piece tracks these people from the 1970s through 2046. Is there a connection there with Wong Kar-Wai’s film?

Unseld & Baldwin:​ Huh, that’s interesting, no one has pointed that out so far. It wasn’t on our mind as we were writing it. It came more from how old do we want our protagonist to be narratively in her final chapter and what year that would then need to take place in. Having said that though, Wong Kar-Wai’s sensibilities in film in regards to movement, light and camera are very close to dance, so in a way there is a relation.

Filmmaker: Perhaps it ties in with the notions of time travel and the spectral visions of the imaginary science-fiction world in that particular film as well. But I’m curious about the process of choreographing for virtual reality. After doing many two-dimensional dance films did this feel more akin to working on a stage again? Was the sense of depth different?

Unseld & Baldwin:​ Yes! Let’s first say that all film is choreography (bodies in motion expressing themselves around a moveable eye, the camera). But in 360 degrees, linear narrative goes out the window and “inhabiting moments” becomes the focus. Choreographing this project was a relief and a returning to the roots of professional dancing.

Baldwin: I’ve spent years of my life on a stage, feeling both the performers and audience all around me — with me at the center making physical choices. On set and when I’d wear the headset (during our intensive back and forth editing sessions), I would summon those moments and listen to that “brain.” Many of my creative choices were made with this performer kinesthetic, and Saschka is a dancer at heart.

Unseld & Baldwin:​ We both trusted our differences and met in the middle. We would put the camera (essentially YOU, the viewer) between us and both dance — one moving (Lily) and the other holding the camera (Saschka). This is how we developed our style, with lots of trial and error.

Baldwin: Saschka inspired me with this line: “If we fail, let’s fail upward.”

Filmmaker: You just mentioned another unique aspect of VR, which is its 360-degree view and how — or whether — to direct viewers’ attention. You’ve lost the proscenium arch, so was it difficult or freeing to think about where viewers would be looking?

Unseld & Baldwin:​ It’s an interesting question and one that has been with VR from the beginning, at least for people coming from film, where the director is effectively a dictator about the sameness of the audience’s experience. But we think everyone’s thinking about VR has evolved since then — if you give your audience an intriguing story, intriguing events, they will look at these events. You can think of film as a very one dimensional dance, one where the film itself doesn’t need to entice the audience at all as they are forced to watch at the screen. In VR narrative needs to be more than that, it needs to become a conversation with the audience about interest and attention in a kind of mutual dance.

Filmmaker: On that note, Lily has described Through You‘s camera movement as “a breathing handheld camera,” which honestly is something fairly rare in VR — we don’t often see such a physical, corporeal presence. What was that process like, embodying the camera rig with such physicality, and how was it different with a VR piece than it would have been for a traditional 2D film?

Unseld & Baldwin:​ We stopped thinking about things in relation to film completely and are not even comparing things anymore that way, as it keeps you from truly being free in the medium. On set we were there, with our dancers, in the space. Moving the camera was about feeling what the right spatial relationship to the dancers was, in relation to their movement, their energy and the space in general. It’s about feeling the energy there is in the room and going with that flow. Or, if something aggressive is needed, taking over that flow and pushing against it.

Filmmaker: Were there other things you did to manipulate the image? Can you talk about focus — such as image distortion — and color, for instance?

Unseld & Baldwin:​ Traditional focus, as in depth of field, is sadly not a thing in VR yet. We hope soon, as it will open a whole new world of possibilities. Color we wanted to be relatively truthful with. Our incredible DP Dagmar Weaver-Madsen turned the sets into such sculptures of light that in post it was mostly about pushing that direction slightly further vs. adding an artificial layer.

Filmmaker: Can you talk about time? That’s another element that VR can manipulate effectively. Obviously the piece covers a great time span, and I’m interested in how you conveyed that, but I’m also curious about how you approached each moment and how time relates to the movement and the narrative as it progresses.

Unseld & Baldwin:​ It is all interlinked: movement, time, space, narrative. We decided pretty early on to shoot long takes of experimentation for each narrative moment in our protagonist’s life. We ran multiple improvisational takes of over ten minutes of length that in the end might just be one minute of narrative. What we found early on was that the key here was not to pre-script everything to the second, something that is, if we’re honest, impossible if we truly ascribe to the idea that it’s a medium with not yet written rules. Instead we found the flow of each time fractures (as we called each edit) as it relates to movement and narrative in edit.

Filmmaker: What about sound? That’s an area that can be overlooked, so how did you approach it?

Unseld & Baldwin:​ ​Sound, music and our binaural mix are everything. We treated them as invisible, but present performers. We folded them into our editing process (rather than delivering a locked cut and then augmenting with sonices) for a more integrated approach to immersion. We were exploring the concepts of “having a body” and “becoming a memory” — all of these more esoteric but very real experiences and we wanted to give voice to them. Sonics direct the viewer in VR, so we explored loads with what activated the viewer to move where, realizing we could ultimately sculpt the rhythm of experience with these choices. In a project without dialogue, the sonics were particularly epic. It was a dreamy collaboration with our composer Mark degli Antoni and sound designer/mixer Drazen Bosnjak, who were amazingly game for our build, break, and “try again” approach. We all wanted to try something we’d never done before.

Filmmaker: Finally, what was it like working with the Sundance Institute and going through that entire process through to the premiere? How was Through You different for Sundance’s involvement, and what advice would you give anyone interested in the Sundance residency?

Unseld & Baldwin:​ ​The residence is wonderful. We’ve known Kamal, Ruthie, Shari, Rachel and Hussein for a while and they’re all just wonderfully supportive people. The residency is different in the way that it is more for projects that are more formed than the ones entering the labs. And then being able to use the support of the folks at Sundance and their network to push the project to its best form. In our case that residence involved also a collaboration and support by Jaunt, who provided the camera, and the incredible support of one of their DPs, Brooke Chapman, without whom none of this project would have seen the light of day.