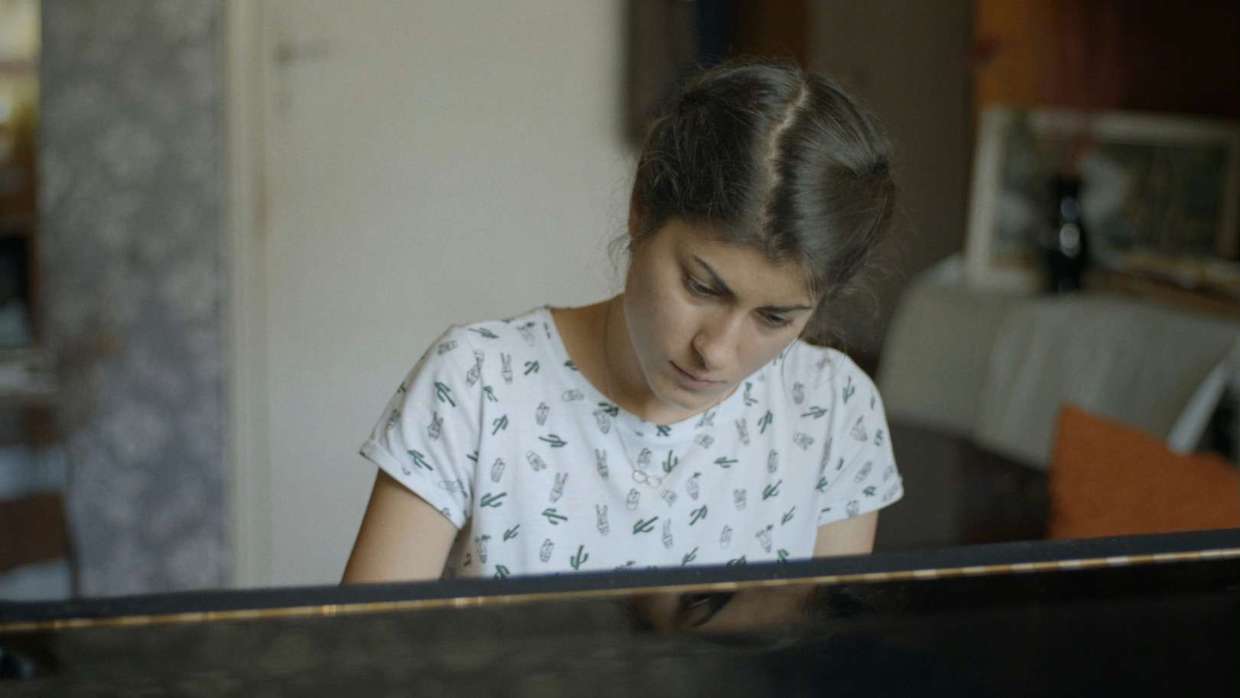 Ilian Metev’s deliberately small-scale, extremely precise 3/4 puts a trio of non-actors through fictional paces. The family unit: teen classical pianist Mila (Mila Mihova), preparing for an audition that, if all goes well, will let her continue her studies in Germany; oft-annoying younger brother Niki (Nikolay Mashalov); physicist dad Todor (Todor Veltchev). (Mom is unseen: I’m the umpteenth to note that the title is both a time signature and way of noting that three out of four family members are present.) Mila’s stress over this impending potential pivot point in her life is transferred onto father and son, who react in different ways. Niki is a typical incorrigible younger brother, full of useless energy that comes out in the most annoying ways. “You’re draining so much energy,” Mila tells him. “That’s what I’ll miss most.” That’s in an affectionate moment: a more typically testy exchange is “Leave me alone”; “I can’t.”

3/4 is yet another recent film shot in the classical 1.33 square: this has been happening with such increasing frequency that it almost feels like it’ll be back as a normative option at the multiplex any day now. Metev shows conspicuous chops in the very first shot: a downward-angled/traveling tracking shot across pavement, with a plastic bottle being kicked back and forth slicing the frame horizontally and scooters breaking it vertically before settling in on Niki. Aftewards, Metev sticks largely, though not exclusively, to medium close-ups: the frame is comfortably and unostentatiously occupied by people considered up close, with little to distract from paying close attention to them. There are no dramatic incidents of note, which is not the same thing as saying that “nothing happens”; there’s practicing and lessons, walk-and-talks, dinners being made, all building to a few moments of crisis. His own editor, Metev tends to cut scenes off before wherever the final beat normally would be for gently disconcerting effect. Basically, it’s a very hard movie to discuss in detail or unpack at great length; it creates a totally believable reality from moment to moment while slowly ratcheting up the sense of Mila’s tense discomfort with herself — a self-imposed burden of relentless self-accountability — and how it reverberates with others. There’s one moment I want to highlight, because it’s such a small thing that’s kind of perfect in its own way but doesn’t really contribute anything thematically. Annoying his sister, who’s reading, Niki throws a blanket over Mila; when she pulls the top of it back over its head, it becomes a cowl. I thought — and hated myself for thinking — “she looks like a Sith lord.” Some 45 minutes later, someone disses Kylo Ren’s character as week, proving we all live with the same stupid monoculture-sculpted subconscious. I’ll let another line from that scene sum the film up: “I liked the development of the family drama and all that rubbish.”

Agnes Varda and JR’s very endearing and entertaining Faces Places is basically The Beaches of Agnes by other means: an excuse for the now-octogenarian filmmaker to go out and meet people while rummaging through memories of her past. JR is a French photographer who likes to take large-scale photos of people and is even happier when he can paste those photos on walls, so he and Varda set out on a series of trips which allow Varda to visit French coal country, a factory down by the docks, etc. She talks to a great many people and gets the best out of them; they, in turn, are touched (albeit sometimes alarmed) to be acknowledged both verbally and visually. This is one of the only times I’ve seen something and thought, “this might actually work better as a TV/web series” — the film seems like it could begin and end at any point. Where it does end, hilariously, is a plot point instigated by (no spoilers) Jean-Luc Godard acting like a petulant jerk. That this was the moment the plot shifted cracked me up to no end — it seems entirely staged, but also entirely consistent with his character. The person sitting next to me in the screening room shot me a very curious glance as to why this made me lose it so hard; if you have to have it explained, it won’t make sense.