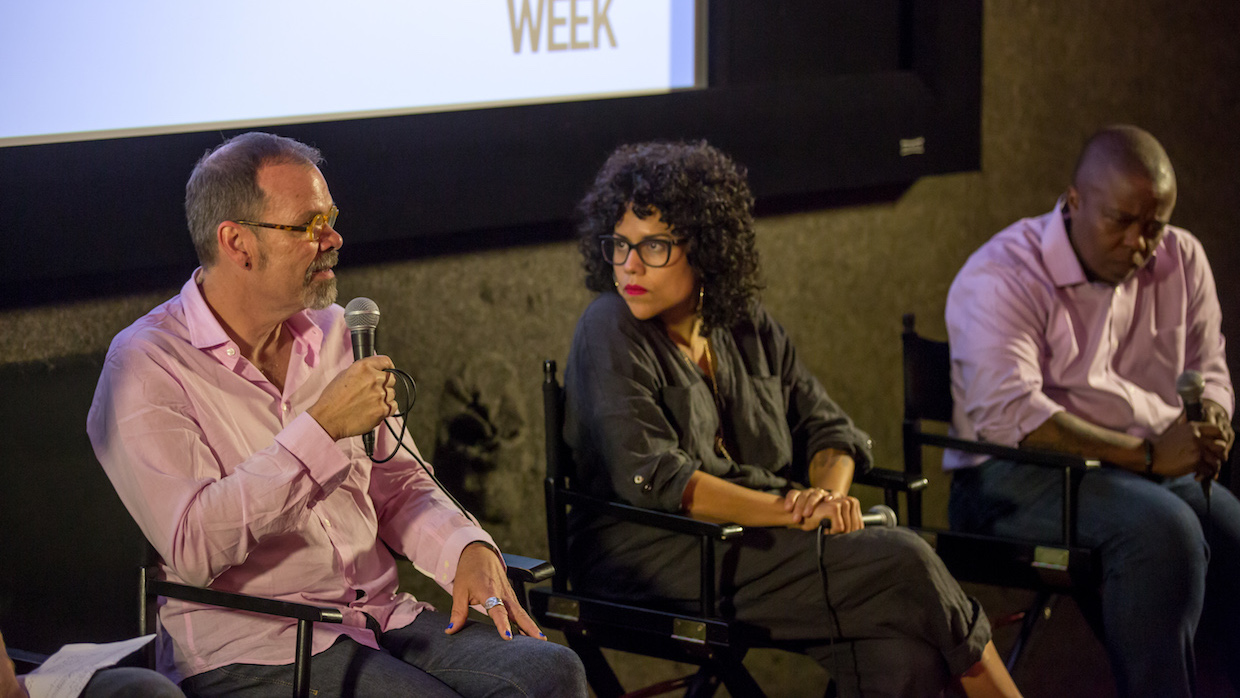 by Matt Prigge
in Directors, Festivals & Events, Interviews
on Sep 22, 2017

“I think we have this profound misrepresentation around personal films being small,” said Cecilia Aldarondo, one of three filmmakers of personal docs who spoke at IFP Week 2017. The panel was called “When the Personal Gets Political and the Political Gets Personal.” In the case of all three filmmakers’ films, they’re both. “I’ve gotten so many responses from potential funders of people who think that way. They hear ‘personal’ and they hear ‘small.’ They think it won’t have an audience. With these projects, I think we’ve demonstrated that’s not the case. If we’re dealing with questions of social change and justice, we also have to be thinking about the intimate.”

Aldarondo was present at the talk, moderated by Sundance Institute Senior Programmer David Courier, because of her film Memories of a Penitent Heart. Her documentary is about a family crisis: It follows Aldarondo as she looks into the secret life of her uncle, who died of AIDS 20 years prior. She tracks down his lover, now a priest who goes by the name “Father Aquin,” thus opening up a whole nest of familial strife.

But Memories of a Penitent Heart is anything but small. “In the case of all our films, we are trying to talk about structural forms of injustice,” Aldarondo said. “I always say what happened to my family is a cautionary tale. The thing about a cautionary tale is it’s told over and over again, unfortunately.” She sees in the silence of her family a bigger issue about people turning their back on loved ones due to prejudice. Throughout the film, she interrogates her family, including her mother, about their rejection of her uncle.

It’s a heady film, especially once it turns on itself, with Aldarondo critiquing herself for damning her family, then trying to make amends. She said early cuts of Memories of a Penitent Heart were too judgmental, with Aldarondo merely pointing her finger at guilty parties. That changed as she further edited the film.

“It was important to make sure I was not only being really mindful of how they were going to appreciate the film, but how they were going to feel about me afterwards,” she said. She wound up showing a late cut of the film to both her mother and Aquin. “I really wanted them to honestly tell me what they thought about it. In a weird way, my mom felt really liberated. She became an activist though the course of making the film.”

Yance Ford’s newly released Strong Island is also about a murder in the family: When the filmmaker was a sophomore in college, his brother was murdered. It’s a personal film too, but it’s not about “getting over it.”

“Closure isn’t something I believe in. I do believe in transformation,” Ford said. He also wanted his film to expose a society that still doesn’t believe in deeply-seated and institutional racism. “I hope it cracks this mythology about the suburbs, to question how it is essentially unsafe to be any adjective and black: angry and black, happy and black, wanting a refund and black, trying to fill your car with gas and black, trying to reach for your wallet and registration and black, unhappy with the car repair and black.”

On a more personal level, Strong Island is a study of grief, and about how each of us contributes, in a small way, to a society that likes to sweep its demons under the rug. “It’s about breaking the complicity of silence,” Ford explained. “Part of breaking the silence is asking questions. Each section [of the film] returns to the scene of the crime. That layering of information shows another layer of breaking the silence.”

David France, director of the new doc The Death and Life of Marsha P. Johnson, pointed out how personal films can have an even greater impact than imagined. France’s previous film, How to Survive a Plague, chronicled the ACT UP movement of the ’80s and ’90s as activists fought apathetic, if not hostile, powers during the AIDS epidemic. France wasn’t himself an activist; he was a reporter for The Village Voice. But his concerns were ACT UP’s concerns, and it was his community that was battling for their lives. He remembers a very curious reaction when he premiered the film at Sundance in 2012.

“People in the audience were thrilled, especially people who were younger, under 35. It was like they had been on a ride,” France recalled. “People in the Q&A said, ‘I wish I was there.’ I would wish anything but that. I didn’t want to be there; I didn’t want that ever to have happened. But they saw this agency, this ability of total outsiders who were stripped of any civic power. How they did what they did, how they did it together, was inspiring.”