“A Horror Film in Slow Motion”: Greg Barker on His DOC NYC Opener The Final Year 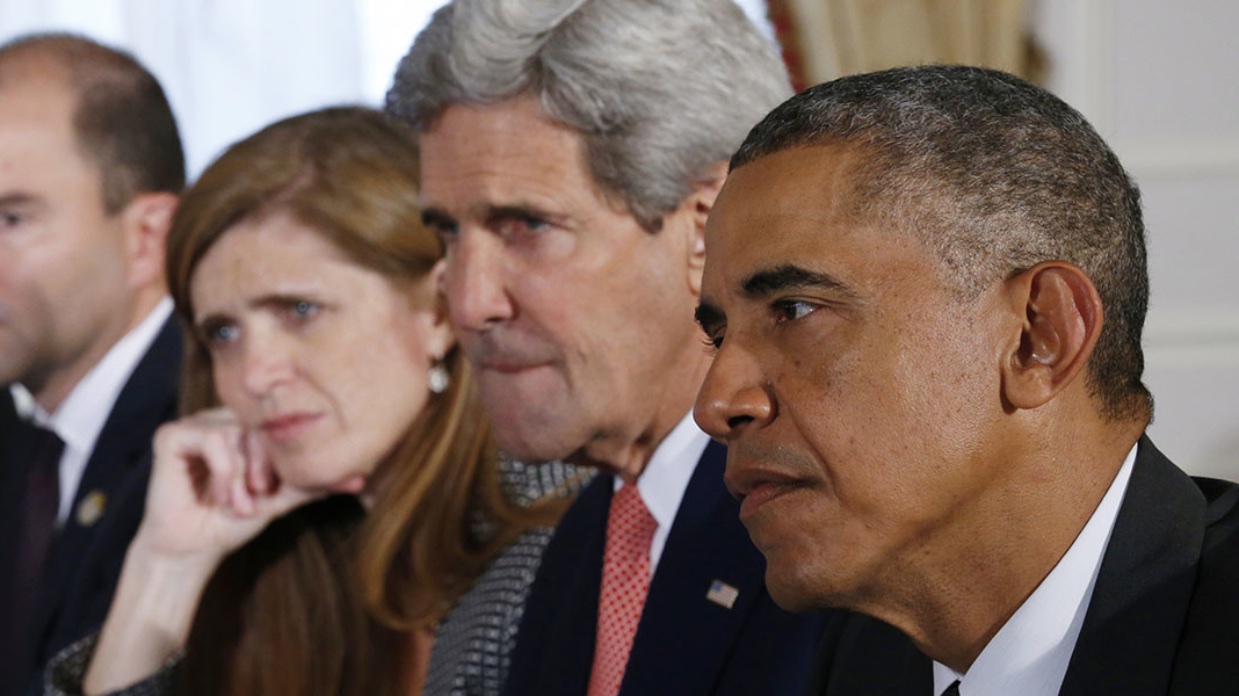 by Lauren Wissot
in Directors, Interviews
on Nov 8, 2017

Opening this edition’s DOC NYC on November 9th is Greg Barker’s The Final Year, a truly up-close-and-personal, behind-the-scenes look at the Obama administration and its foreign policy team during its last 12 months. To say that Barker gained unprecedented access to the president’s men (and one woman) during that period is an understatement. The veteran documentarian (Homegrown: The Counter-Terror Dilemma, Manhunt: The Inside Story of the Hunt for Bin Laden, etc.) managed to shadow three heavyweight insiders — Secretary of State John Kerry, Ambassador to the United Nations Samantha Power, and “Assistant to the President and Deputy National Security Advisor for Strategic Communications and Speechwriting” Ben Rhodes — across multiple time zones and deep inside White House offices (one literally bugged — the sight of a dead cockroach actually disrupts a strategy meeting). And all before the trio had any inkling of the biggest unconventional threat to come.

Filmmaker was fortunate enough to catch up with Barker right before the doc’s NYC premiere.

Filmmaker: Could you talk a bit about the process of gaining access to the Obama administration? I know you already had a working relationship with Samantha Power, but what type of pre-pro, bureaucratic hoops did you have to jump through (and how long did that take)?

Barker: There was a lot of resistance at first. I knew Ambassador Samantha Power through some earlier projects, but hadn’t seen her in a couple of years, since she became UN ambassador. In the summer of 2015, I arranged to meet her and laid out my idea for a film that would track the Obama administration’s foreign policy team during their last year in office. I said I wanted to humanize the workings of America’s foreign policy machinery during what I had a hunch would be a momentous year. Historically, big things tend to happen during the final year of a two-term presidency, especially in foreign policy, and I thought this might be particularly true of the Obama administration, which had consciously set out to redefine America’s role in the world. I knew they wanted to “lock in” that legacy before leaving office.

Ambassador Power was intrigued, but a project of this scope needed buy-in from across the administration, and at the highest levels. It’s fair to say there was massive skepticism throughout the bureaucracy, which took a lot of time to work through. From the outset I was asking for access to real meetings, real behind-the-scenes moments, and contemporaneous interviews. The biggest challenges were often logistical. We needed to be separate from the normal press corps, which meant figuring out ways to insert me and my small crew into small rooms, and motorcades that are almost by definition closed to cameras, and to do that in a way that didn’t interfere with the normal workings of government officials. We started slowly, in September 2016, and by December had shown what was possible, so by the time 2016 began we were pretty much up and running across the USUN, the main State Department, and the White House itself.

Along the way, I realized what the film wanted to become. This is a story about a small group of people who came together nearly a decade ago, rallying behind a man and his cause. They set out to change the world, and against all expectations, found themselves in a position to affect that change. The believed they could redefine American foreign policy, promote diplomacy over large-scale military action, and alter how we as a nation think about questions of war and peace. They had their share of victories — the Iran deal, climate change, Cuba — and despite their deep internal divisions over one of the toughest foreign policy questions of our age (Syria), at the outset of 2016 they believed they had largely succeeded, and that their legacy would define US foreign policy for decades to come.

Filmmaker: During the Savannah Film Festival Q&A I recently attended you seemed to have a nice rapport going with Ben Rhodes, yet Rhodes also struck me as the most guarded of the film’s subjects. (There’s actually a smart, telling scene in the film where you reveal that Rhodes has been burned before by a journalist he trusted.) Of your three main characters was he the most difficult to gain the confidence of? And how do you go about developing trust with your subjects in the first place?

Barker: At the beginning of every project I tell my prospective characters that documentaries always involve a leap of faith. I am asking them to reveal themselves to me and my cameras, and then trust that I will tell their story accurately. I had the same conversations on this film — with Ben, and everyone else involved — and in my experience it’s usually really a question of time and patience before any walls start to come down. Luckily, because we were filming with these folks for so many months, and in 21 different countries, we had the time and space to let trust grow. A lot of credit goes to my extraordinary crew, who developed a feel for how to operate in these tight, heavily secured spaces.

Filmmaker: It actually struck me that Trump’s win, though a catastrophe for our country, was a coup for the film. It transformed what would have been a fascinating, fly-on-the-wall look at the last year of the administration into a Hitchcockian thriller (with the “bomb under the table” being Trump!) Did your approach to the editing change after Trump’s election?

Barker: We began editing almost as soon as we began filming, but until the election we were really just assembling scenes and focusing on specific moments. We had so much material to comb through, and I was still on the road almost constantly, that my editors and I never actually put everything together and tried to make even a rough cut. So all the key editing — i.e, actually making the film — happened post-election, and so we could shape the entire film knowing where it was heading. Now it’s almost surreal of course, as the characters have no idea what lies in store. Samantha Power calls it a horror film in slow motion, in which the audience knows the terror that awaits, while the characters themselves are totally oblivious.

Truthfully, though, if Trump had not won I think there would have been a lot of momentous things happening post-election that speak directly to what clearly was a crucial moment in our nation’s history, regardless of the outcome. Obama’s speech in Greece, for instance, was initially planned to be outdoors on the steps of the Parthenon, as if to showcase the endurance of democracy in the face of demagoguery. I also think that speech would have pointed a finger directly at Russia, and that a lot of what we later learned about Russian interference would have been revealed right after the election had Trump not won.

Late on election night, after the results were clear, Samantha Power asked me what this meant for my film. I said I thought it just got a lot more important. In retrospect, what our cameras captured was more than just high-ranking government officials at work, as fascinating and informative as that may be. We captured a worldview, an attitude, an approach to international affairs that — we now know — was fleeting, unique to a particular moment that is now gone.

Now at each screening I have the surreal experience of watching an audience experience my film in two simultaneous but very different ways. One on level, they’re watching a movie like any other, taking each scene as it unfolds. And then there is the narrative playing in their minds — the narrative of today, the horror film (or not, depending on your perspective) that Ambassador Power spoke of. I’ve never made a film that feels so in the moment, where the viewing experience varies week by week, depending on the latest onslaught of news from the team that sits in the same West Wing and State Department offices that my crew and I came to know so well over 12 tumultuous, unforgettable months.

Filmmaker: Since you’re a longtime war correspondent who’s made a string of films focused on international events, I’m wondering how shooting in the safe confines of the White House differed from your usual MO. Or was the experience similar to other productions?

Barker: I don’t really chase danger any more, but honestly, for me the filming process is the same everywhere -– be open, be authentic, and let events unfold around you.

Filmmaker: Finally, I’m wondering if you have any particular hopes or goals for the film. Obviously, this isn’t as high-stakes a subject as something like the Rwandan genocide, though you certainly seem passionate about the Obama legacy (and its possible dismantling by the Trump administration).

Barker: As a storyteller, I’m convinced that the only way through our current morass of public discourse is to build empathy for those with whom we may disagree.

At 4:00 AM on the morning of Donald Trump’s inauguration, my team and I filmed Samantha Power as she slowly removed her 7-year-old son’s artwork from the walls of her office overlooking First Avenue. She filled a bankers box with all the drawings, and then carried it down into a waiting SUV for what would be her last official ride as US Ambassador to the United Nations.

Earlier that day I filmed Secretary John Kerry as he left the State Department for the final time, and presidential speechwriter and confidant Ben Rhodes in the White House as he packed his own belongings, wistfully coming across his handwritten notes from a 2009 sit-down with President Obama in the Oval Office.

As Samantha Power drove away into the night, and I called a wrap on a production that had taken me and my crew to 21 countries over 12 eventful months, I knew I had witnessed something that we all take for granted but rarely experience up close: the peaceful transfer of power that lies at the essence of our democracy. And that gave me hope.