“He Was On Facebook, Having Trouble with His Computer, So I Helped Him…”: Mohammed Naqvi Talks Filming Former Pakistani President Pervez Musharraf in Insha’Allah Democracy 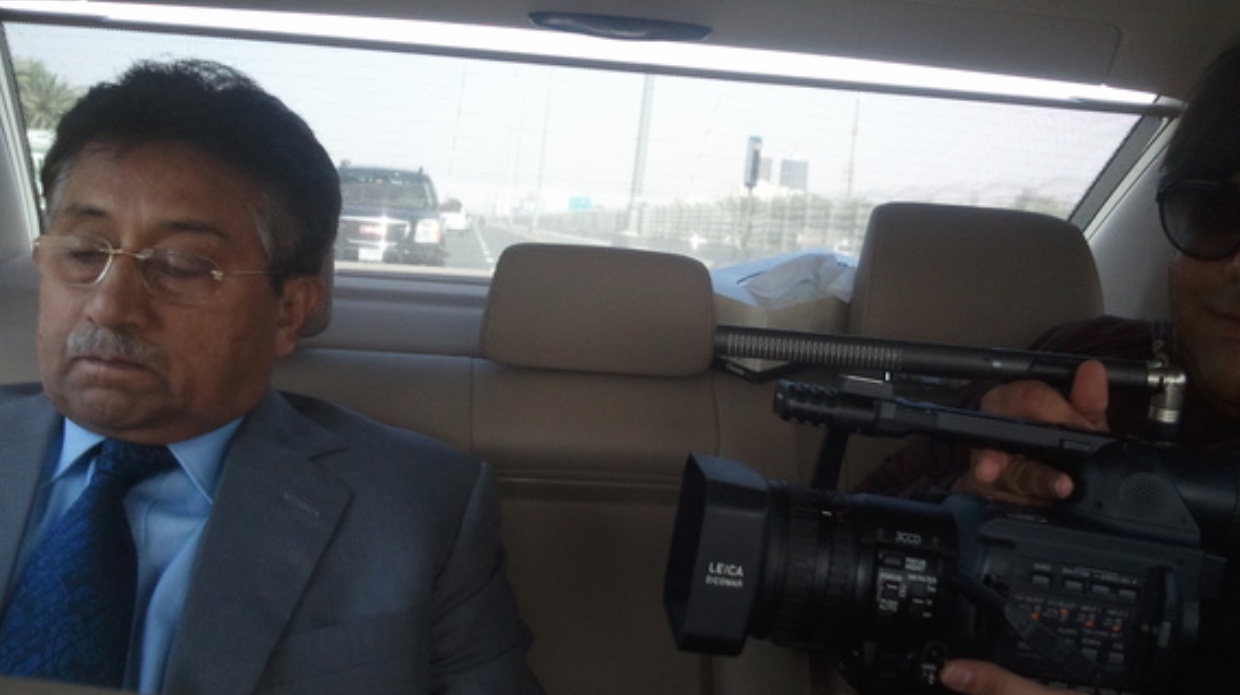 by Kaleem Aftab
in Directors, Interviews
on Dec 4, 2017

Insha’Allah Democracy sees filmmaker Mohammed Naqvi investigate politics through a series of interviews with Pervez Musharraf, who became the head of the Pakistani government following a bloodless coup in 1999. In June 2001 the general became the tenth President of Pakistan. The attack on the World Trade Center took place a few months after Musharraf’s presidency began, and the War on Terror was the major cloud that hung over his head throughout his regime. In 2008 he resigned from office in the face of impeachment proceedings being taken against him by the Pakistani parliament.

For filmmaker ‘Mo’ Naqvi, it wasn’t geopolitics that interested him in this world leader. He was a fan of the leader because Musharraf made him feel safe and secure having grown up in a turbulent period of Pakistan’s history as part of the Shia minority. Finding comfort in the stability Musharraf was able to provide, Naqvi was willing to overlook some over more troubling aspects of the presidency, such as his failure to adhere to rule of law.

The filmmaker was given the rare opportunity to interview Musharraf in Dubai and London where the former president lives in exile. What transpires is a surprising, engaging journey as Naqvi begins his own political awakening as he prepares to vote in Pakistani elections for the first time just as Musharraf is attempting his own political comeback.

Insha’Allah Democracy is Naqvi’s sixth film and had its world premiere at Sheffield Documentary Film Festival. The documentary recently had its North American premiere at Doc NYC.

Filmmaker: You begin your film by admitting to your support of the coup d’etat that resulted in Musharraf taking power. What was that time like?

Naqvi: Musharraf was such a polarizing character. He elicits immediate responses and many of them tend to be very negative. If we are looking at the situation through a very moral, absolutist Western prism, where dictatorship is bad and democracy is good, of course it is negative. I wanted to show my own political trajectory. When your life is in danger, or your community is struggling, then you have to kind of look at your own needs first. I wanted to approach the film from a human level, rather than just having an overview that explained that Pakistan is mired in complex political terrain.

Filmmaker: Is that why you play such a central role in your own film?

Naqvi: I didn’t expect that I would be put myself into the documentary. At first I saw this project as a continuation of some of my previous work where I had profiled different Pakistani citizens — for example, my film Shame in 2006 was a profile of Mukhtaran Mai, who was a human rights icon. As I thought about Musharraf running for election again, [there was] the fact that I was voting for the first time, and symbolically that Pakistan was going through its own sort of political maturation process. I felt like I should be guiding the audience through the story so that a lay person can understand it. Pakistan is a place where you have extreme political conditions where people end up actually supporting terrorists or dictators. The situation also has some interesting parallels to the political shifts that are happening across the world, with Trump in America, Marine Le Pen in France and with Brexit.

Filmmaker: You must have been very excited about meeting Musharraf in Dubai.

Naqvi: I didn’t know that I’d be following him for five years. I was upfront at the beginning and said this is not going to be some propaganda piece. He is a military dictator so you obviously have that kind of apprehension, but he was just so nice and so hospitable and friendly. He was on Facebook and having trouble with his computer so I helped him. He reminded of an uncle of mine, so we connected and hit it off. I’ll leave it to the viewer to decide whether I was being manipulated or not. I purposely bring that question up because I wanted people to go through the same trajectory as I did. He was my savior when I started this film, and I was in a different place by the time the film was over.

Filmmaker: How did you feel about having to go to Dubai to do these interviews with someone who was hoping to get elected to office in Pakistan?

Naqvi: To be fair, in the context of Pakistani politics we have several politicians who were in exile running for office, or even in jail, sometimes successfully, so it wasn’t that strange. What was good about filming with him when he was outside of Pakistan in Dubai and also in London was that it gave me a chance to get better access. He was ousted pretty harshly from the government so he was licking his wounds and in a period of reflection. By the time we finished filming I was able to divorce my emotional reaction to my rational reaction. I could be fond of someone who is deeply flawed but when it comes to running a country, and who would you vote for, well that’s a different matter.

Filmmaker: Do you think there is ever such a thing as a benevolent dictator?

Naqvi: I used to, but I don’t anymore. Many people would call Musharraf a benevolent dictator, at least initially. The fundamental problem is when you don’t have a representative government and you leave it to one person to decide, checks and balance do not exist. Eventually as with most dictators things come undone.

Filmmaker: The film details how the events of 2001 changed the nature of his presidency. Do you think your view on Musharraf may never have changed but for 9/11?

Naqvi: That is an interesting question. Something would have happened that would have challenged his legitimacy to stay in power. Maybe he would have been out of office even sooner! With 9/11 and the American coalition supporting him he actually got to use that as an excuse to extend his reign. He was very slick in playing both sides, making Americans believe that he was the only person that they could rely on while he was singing a different tune to Pakistanis themselves.

Filmmaker: You start expressing the deep concern that you had as a child of being a Shia in a predominately Sunni country. How do you feel today? Is the sectarian situation even worse?

Naqvi: It is still dangerous. What is different now is that Pakistanis themselves are actually now taking accountability and not just completely ignoring the situation outright. Are they doing as much as they should? No. But it is a step in the right direction. Our Prime Minister Nawaz Sharif is himself pushing for minority protection legislation and that is surprising as this is someone who has historically pandered to the extreme right.

Filmmaker: Where did your desire to tell an almost oral history of Pakistan in your films come from?

Naqvi: I came of age as a filmmaker when I moved to New York right after college in August of 2001. The next month, 9/11 happened and the aftermath really confirmed the kind of work that I would be doing as an artist. One of the first films I worked on was called Terror’s Children. I was really young, only 22, and we had pitched this hour special to a joint venture at that time between the Discovery Channel and the New York Times. What was important for me then, as it is now, is that people from any community tell our own stories. Sometimes when outsiders look in, the nuances can be missed. So for example, one might think that my approach to this film is very counterintuitive supporting a dictator, but an outsider couldn’t understand that unless they were in the same situation that I was in where my security and safety were in jeopardy.

Filmmaker: How important was voting in this election to you, one where for the first time one democratically elected leader was followed by another?

Naqvi: It’s a historic milestone in Pakistan’s own political journey, so it kind of fit the narrative perfectly. The title of the film, Insha’Allah Democracy (God willing) [conveys] a hope that this will carry on.