“Comedy is Fast, and So Was Our Edit”: Editor Courtney Ware on Never Goin’ Back 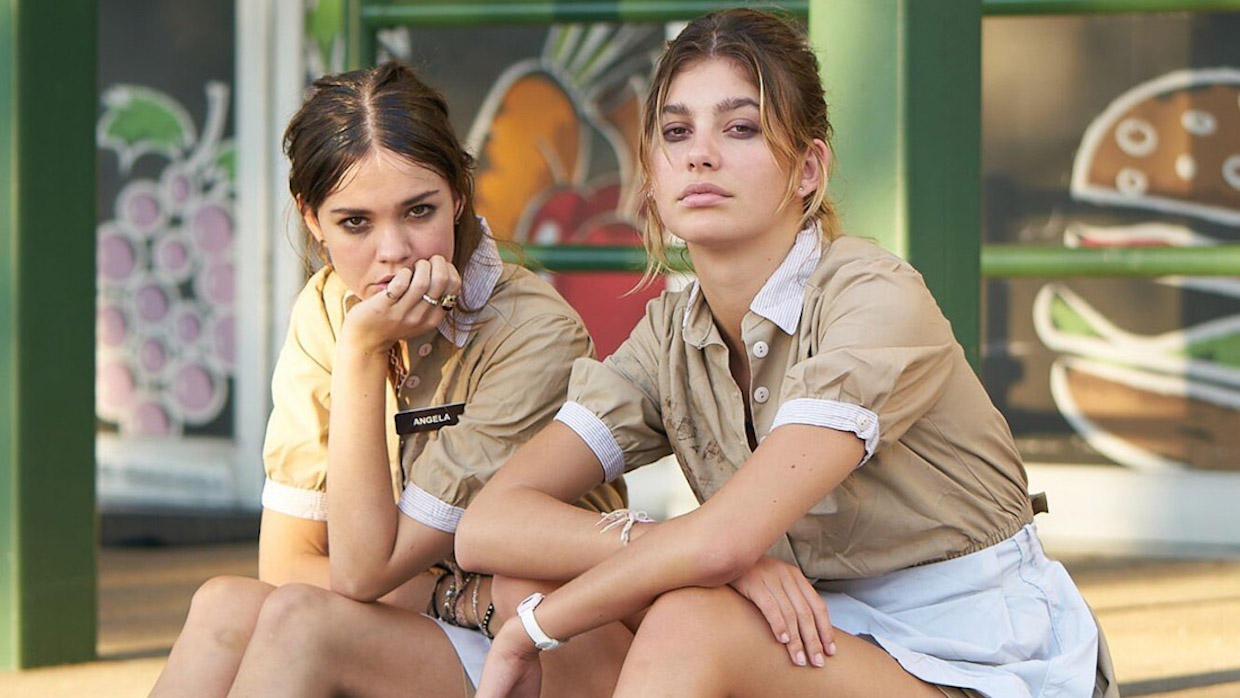 Editor Augustine Frizzell makes her feature directorial comedy with the loose comedy Never Goin’ Back, starring  Maia Mitchell and Cami Morrone as two best friends whose planned week off at the beach will not be canceled despite being burgled, behind on rent and the fact that they might lose their jobs. DP Greta Zozula already spoke to some of the challenges of production here; editor Courtney Ware offers more insight on cutting a comedy alongside the shoot.

Ware: I am a bit of a “jack of all trades, master of some”; not only do I edit, but I direct, write and produce as well. I had been wanting to work with Augustine and producer Liz Cardenas for a while but, as things go, the projects never lined up. When I heard they were about to go into production for this film, I asked to put my name in the hat to edit.  Thankfully, our schedules lined up! Augustine is an excellent editor as well, and has typically edited all of her previous work. So one of the main aspects of me coming on board was to be able to edit on set. Our main goal was to make sure that sequences were working, that the comedy was hitting and that we weren’t missing anything. In the end, we ended up co-editing the film in an incredibly collaborative way.

Ware: I had the luxury of editing on set. Typically, I was editing the scenes and sequences that were shot the day before. This allowed Augustine and I to work through the style and the language of the film at a very early stage in the assembly. When she had the capacity to (in the middle of, you know, directing the film), she would give me feedback on specific scenes. I was able to tweak and adjust accordingly, which gave us a really solid start with the assembly. Outside of that, our main goal was to focus on the pacing of the comedy. Comedy is fast, and so was our edit.

Ware: We use a lot of jump cuts and other techniques to keep the pacing at full speed. We started to push the editing style a bit from the beginning based on Augustine’s vision. From there, Augustine was able to really push that style and her voice even further. In fact, some of my favorite sequences were ones that she completely recut from my first assembly. We had test screenings throughout the process as well.  This was so instrumental — especially for a comedy — to make sure the decisions we were making were actually landing with an audience.

Ware: I started out as a producer who did a little bit of editing on the side for corporate projects.  Then, I got my first gig as an assistant editor on a feature film. That was my first taste of what editing on such a large narrative scale could be like —and I loved it. I directed my first feature film in 2014, which I then edited as well. The entire structure of the film completely changed in the edit room. It was thrilling. I felt that my storytelling abilities as a whole were being pushed further. I learned so much through that process. So now, I really use my editing brain to help in my directing, and vice versa. For me, it all comes down to how the emotions of the characters — and the story — resonate.

Ware: I use Adobe Premiere Pro as part of the Creative Cloud.  I actually started out on FCP7, and I was, as I say, a “Final Cut Evangelist.” I would try changing anyone’s mind who didn’t already use FCP. I was proficient in Avid, but I loved Final Cut.  Then, when FCX appeared, I was completely devastated (I know — seems so silly now). I wasn’t familiar with PP at all, but made the switch. Now, I speak the Adobe language and am so much happier. As “fangirl” as I can be, I feel loved and supported by Adobe. Ha!

Ware: The most difficult scene to cut for me was definitely the first robbery scene. It’s completely chaotic and completely hilarious. Our DP Greta shot the whole thing handheld, and there were so many setups and takes that the whole scene felt like climbing up a mountain that I’d never see the peak. There were small ad-libbed bits of genius from the actors — I really wasn’t sure how I would fit everything in. That scene took the longest to cut out of the entire film. And I am proud to say that other than some tweaks, that scene remained fairly intact from that first assembly cut.

Ware: On a personal level, this was the first feature that I edited for someone else’s project and not my own work. It was so fulfilling, and essentially a proof of concept for me. I absolutely love collaborating with other artists and filmmakers in this regard. I’m excited to continue editing with and for other people as well.

I think one thing that definitely changed throughout this process was my understanding and appreciation for the heart behind the film. Of course, a comedy needs to be funny. But what I didn’t realize, is how relatable these girls are and how important it is to have this film exist. I’ve never seen a film like it, and it’s one that I wish I could have seen as a teenager.