“Being a Filmmaker Wasn’t Something It Occurred to Me… You Could Be”: Film Journalist Neville Pierce on His Path Towards Directing 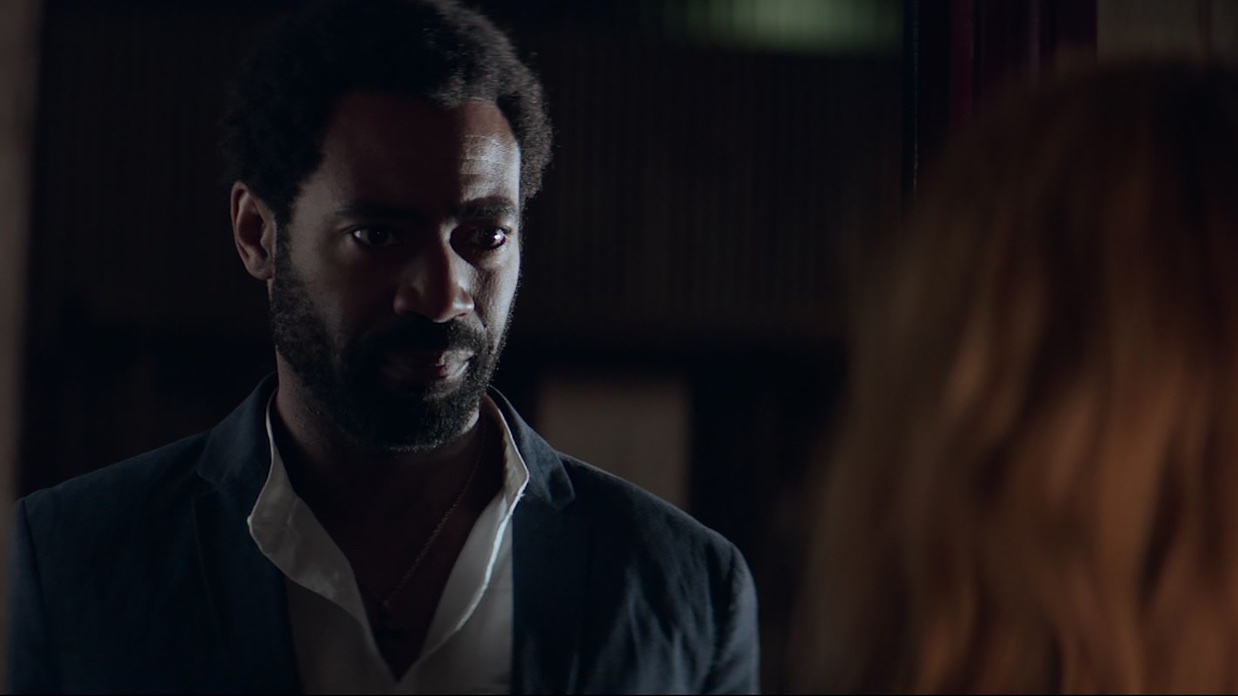 Nicholas Pinnock in Lock In

by Scott Macaulay
in Directors, Interviews
on Feb 5, 2018

Over nearly 20 years, film journalist Neville Pierce has collected bylines at most of the U.K.’s top film publications, including Empire (where he’s a contributing editor), Total Film (where he was the editor) and The Guardian. And while he worked as a reviewer early in his career, he’s best known for his long-form profiles of actors and directors, pieces that are deep dives into the art and craft of subjects like Michael Fassbender, Mark Romanek and, most consistently, David Fincher, whose sets he has visited and written about no less than seven times.

But since 2011 Pierce has been building a parallel career that particularly resonates with us here at Filmmaker. Moving from covering films to making films, he began to write — and sell — screenplays and, in the last two years, direct short films. Parlaying connections within the U.K. acting community, Pierce has made four shorts, three of which are premiering online today. Strikingly, they are different in style and content, illustrating Pierce’s range while also indicating, perhaps, his own process of artistic discovery — an exploration of different genres and tones while working, one presumes, towards an inevitable first feature.

The first of the three films, Bricks, is a terse and chilling two-hander exploring class divisions that adapts an Edgar Allen Poe short story. Ghosted followed, starring Prevenge‘s Alice Lowe, and it’s very different — a romantic comedy with a supernatural twist. My favorite of the three is Lock In, starring Lucy Boynton, Nicholas Pinnock and Tim McInnerny and made for Creative England’s iShorts program. What starts off as small-scale crime drama — a pub owner and his daughter are threatened by a local hood seemingly bent on extortion — turns into a much darker and more psychologically complex scenario. The acting by all three principals is very strong, and without venturing into spoiler territory, I’ll just say the short concludes with a gut punch that particularly resonates at this historical moment.

All three films can be seen on Pierce’s Vimeo page, and Lock In has been embedded here. Below, I interview Pierce about his journey from journalist to director, touching on what’s surprised him about actually making films, how he connected with his actors, and how the act of filmmaking has affected his perspective on film journalism.

LOCK IN from Neville Pierce on Vimeo.

Filmmaker: First, let me ask one of the most obvious questions, which is what it was like to transition from writing about films to making films? What parts of the filmmaking process surprised you and were not what you would have expected from having written about them?

Pierce: I’d been thinking about making films for a very long time. Probably always, without really realising it. Getting into film journalism may have been simply an unconscious step towards that. Being a filmmaker wasn’t something it occurred to me, growing up, that you could be. There’s quite a jump from reviewing films to writing films. And from writing about making them to actually making them. Certainly spending time on set and interviewing filmmakers took some of the mystery out of it, but the tendency for film journalism to focus on story and acting, rather than filmmaking craft, meant there was still loads to learn, especially about practical things: lighting, staging, making sure there are working toilets….

Filmmaker: The three shorts you are premiering online are all different in theme and style. What was behind this kind of diversity — were you experimenting with different styles to see where you’d land as a director, or did you want to demonstrate your range?

Pierce: It wasn’t deliberate. Bricks just felt right. The story was contained and satisfying, the tone appealing. Lock In was supposed to follow — which has more obvious links in style and story — but scheduling meant it got pushed. I got frustrated waiting, read Ghosted and it resonated with me, so we just went for it. A supernatural romantic comedy doesn’t seem like an obvious next step, but it’s easy to overthink things. The lessons learned on that, from a process point of view, were hugely valuable.

Shorts can also allow you a freedom you may not get on features, to try things out, experiment. Black and white felt right for Ghosted — plus it helped stop it looking cheap — and that’s not something I’ll likely be able to do with a feature.

A side benefit to shooting them all in a year is, yeah, hopefully it looks like I’ve got range.

Filmmaker: Lock In is a powerful short about the ways in which we know and cannot know one another. What inspired this particular story?

Pierce: I wanted to make something contained again, something cinematic but manageable on a budget. And a lot of life as a journalist, at least back when I was doing it intensively, was spent in the pub! So maybe that was part of it. Originally Jamie Russell’s script was more expansive — it was more of a whodunnit, with a bigger cast — and we boiled it down through a few drafts to this story about secrets and perception. I’ve not personally had experiences anywhere near as dark as those in Lock In, but the idea of violence in that setting probably isn’t alien to anyone in England, and then looking at what might be beneath that violence. It’s interesting how we judge and dismiss people. This was about looking beyond that. I think that’s an element of all the shorts, actually, including Promise, a fourth short which we’ll release later in 2018.

Filmmaker: How has your work as a journalist informed or fed into your directing work? Specifically, you’ve interviewed a number of great directors. What words and advice, whether directly to you or through your interviews with them, have resonated?

Pierce: Spending time with great filmmakers, and not-so-great ones, made filmmaking feel possible. The biggest lessons probably came from my two favourite contemporary filmmakers. I interviewed Steven Soderbergh for The Informant and he talked about fantasy versus reality, “Are you going to deal with the world as it is or are you going to constantly trying to turn it into something that it’s never going to be?” That thought had a big impact both professionally and personally. Acting out of the facts, rather than out of wishes. The other thing, which I keep at the top of my digital “to do” list, as a constant reminder, is from Fincher: “The lesson of Alien 3 is ‘Take all of the responsibility, because you’re going to get all of the blame.’”

Pierce: This is going to be annoying to say, but: know them. I knew Jason Flemyng from visiting the set of The Curious Case Of Benjamin Button. We hit it off and he said to call if I ever wanted to make something. I eventually did — seven years later! He was true to his word and agreed to be in Bricks. Having him, and my profile as a journalist, helped with getting Blake Ritson I’m sure. Then with Ghosted I knew Alice Lowe a little bit — we’d met for a cuppa, I think because we had a mutual friend. She was a magnet for the other actors. With Lock In, I knew Nicholas Pinnock socially and really admired him as an actor and as a man. Now, that isn’t to say that you need to know loads of actors. Really this all started from getting Jason on board for Bricks. You get one good person and others will follow. I think the lesson is: always ask.

Filmmaker: Finally, on your blog you wrote about how a filmmaker wrote to you about a review — albeit one you didn’t write — and how it made him want to quit filmmaking. You’re still doing film journalism, so how has the act of production and the vicissitudes of distribution and press affected your own job as a film journalist? Has it been difficult to maintain a critical perspective? Has your viewpoint changed at all?

Pierce: I’m in a fortunate position of being able to only accept commissions on films and filmmakers I have a particular interest in. Given I’m looking to learn, there doesn’t seem much point in sitting down with someone if I don’t like their work — or don’t at least admire the intent. That wasn’t always the case, of course. And with reviews, regardless of your feelings about how hard filmmaking is or how much you like the filmmaker, you have an obligation to the reader, and to yourself, to be true to your own taste and belief.

That said, I don’t review much these days and if I do then I try to avoid writing about films I don’t like. If I have to then the tone should be that of a disappointed friend, rather than a gleeful enemy. There are some old reviews I absolutely cringe at, because they were too interested in trying to be clever or witty, to assuage my own insecurities. I think it’s a bit different when you’re a professional film critic, as opposed to a film journalist, because you have to cover everything. Then presenting your view, often in a blunt manner, can be part of the
job. Still, I think there’s a way to be tough without being unkind. It comes down to understanding. And respect.