Tribeca 2018: Michael Muller on Sharks, Fear, and Into the Now 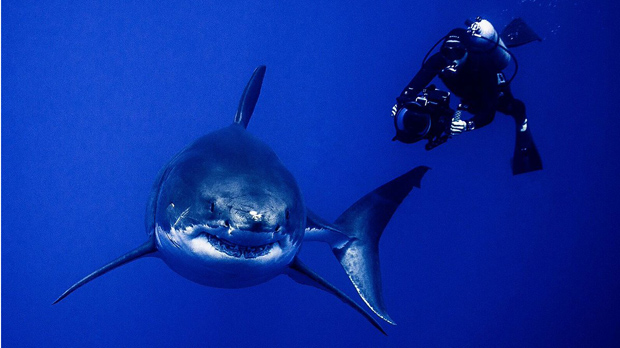 by Randy Astle
in Directors, Interviews, Transmedia
on Apr 24, 2018

If you don’t know Michael Muller‘s name, you do know his work. His posters for Deadpool 2 are the most creative bit of film advertising in the current market, and he’s also shot artwork for Marvel films like Captain America: Civil War, Dr. Strange, and Guardians of the Galaxy, Vol. 2 as well as dozens of other films, innumerable portraits, album covers and ad campaigns for brands like Nike and Sony. But in 2006 he began training his camera on a very different subject, wild sharks, and since then shark photography and marine environmental activism has become his primary cause. His still photos of great whites, hammerheads, and other species have garnered praise, and at this year’s Tribeca Film Festival he’s debuting the next step in his underwater documentary work, a short virtual reality film called Into the Now.

Underwater work can be some of the best VR out there; its use of the vertical axis taps into something VR can provide that a 2.39:1 aspect ratio film cannot, as wildlife can appear above and below you as well as anywhere to the side. In past iterations of Tribeca Immersive I’ve been impressed with films like The Click Effect and Under a Cracked Sky; with Into the Now Muller and his team have arguably improved upon these in the clarity and dimensionality of the photography using a new VR camera rig specially designed for this piece. Close ups of great whites are to be expected but are still striking, and there’s also an endearing moment when a hammerhead bumps the camera rig, two amazing shots of a whale shark passing so close it’s impossible to resist the urge to reach out and touch it, and a sardine bait ball attracting a feeding frenzy of sharks, dolphins and birds that invokes the original Blue Planet films but presents it — including its most famous moment — in an entirely new way.

Beyond the imagery in the headset, Into the Now includes a pod-like chair that lifts until the viewer’s feet are off the floor and then gently swivels and tilts to mimic the action onscreen. I generally rely on my feet to not just pivot but to give me a sense of grounding while watching VR, and losing that created a bit of vertigo for me, but it also augmented the feeling of floating in water that the footage depicts. What could be a gimmick integrates smoothly into the narrative to provide a more immersive experience.

The last surprise of Into the Now is the amount of footage and narration that don’t deal with sharks at all but with the process of recording the footage, university research Muller is participating in that uses VR to learn about the psychology of fear, his own worries about his mortgage and family, and his motivation to go out again and again and face his fears by diving with no cage to photograph sharks.

Filmmaker: This is a film that’s as much about its own making as it is about the sharks and wildlife you feature. What made you decide to make a personal essay film about your own mental state and the psychology and emotions of pursuing these animals rather than just a traditional nature documentary about sharks?

Muller: I wanted to create something that was unpredictable and unlike any underwater doc I had seen before. This is the first film in a series of films I will put out from this initial stage of the project. I chose Ridley Scott’s RSA Films as a global production partner. They represent me for commercials, and I felt that RSA VR, which has released some pivotal VR experiences, would really get what I wanted to do with Into the Now and help bring my vision to life. I decided to start at the beginning of how it all started with me and make it personal; fear was the primary motivator twelve years ago when I started this underwater chapter of my life. I was two days into starting this project when I got a call from Andrew Huberman at Stanford University who was working on a project [about] fear and addressing PTSD. They wanted to use VR technology to help people with PTSD and anxiety issues and the universe took it from there. The films following Into the Now will focus on a variety of subjects ranging from climate change and over fishing, to animal behaviors, and they, I am sure, will all have a personal side.

Filmmaker: What did doing the piece in virtual reality bring to it that made you opt for VR over a two-dimensional film?

Muller: For twelve years I have been on a mission to try and change perceptions using two-dimensional mediums. I found it challenging to really get across what I was witnessing and experiencing in real life in a 2D world. When the VR lightning bolt idea hit me two years ago, I said to myself, “Now this is a way I can take someone along with me and they can experience what I’m experiencing in places I know they will never go.” It really is the closest way of being there without getting wet you’ll ever do. It is incredibly difficult to really show the girth of a 16-foot great white shark or a 55-foot whale shark on a TV or screen. But when you’re in VR and one swims over your head you really get to see and feel just how big they are. That to me is a priceless tool, and when I watch businessmen in three-piece suits I’m meeting with in the middle of a restaurant laughing and reaching out trying to touch the whale swimming in front of them, I know I’ve hacked their brain and they have completely forgotten they’re in the middle of a restaurant. Really, it is intoxicating to watch people’s reactions when they take off the goggles with either a huge smile or often some tears, and either way it’s moving to see.

Filmmaker: Yes, there’s some truly amazing footage here. Can you talk about the camera system you developed and how it’s different from previous VR set ups? What was it like handling the rig underwater?

Muller: When I went out to create the sizzle for fundraising, I quickly learned the only way to shoot underwater in VR is using GoPros but I wanted to shoot stereoscopic. I started hunting around for a company that could deliver and create this and was fortunate to meet Casey Sapp and Matt DeJohn from VRTUL. They had the solution, and we came up with a system that would use nine Blackmagics and weigh 120 pounds, but would remain neutrally buoyant. There were three of us who worked the camera underwater, and I am blessed to have the best in the business down there with me in Morne Hardenberg and Brocq Maxey. When you’re working with a camera that size, it’s similar to shooting on IMAX. You really need to be a mermaid and be comfortable with large predators, so that takes your list of cameramen down to a handful. Working with nine 4K Blackmagics and being able to release the first underwater footage that’s stereoscopic in my opinion is a game changer — specifically, the depth and dimension stereoscopic adds to underwater footage is what sets Into the Now apart.

Filmmaker: What about the chairs that viewers sit in to watch the piece? One thing they do is restrict viewers’ range of motion so they can’t easily turn and see a full 360 degrees, so that directs attention, and then they also obviously move to match the pitching and turning of an underwater swimmer. Where did the idea for that come from, and what was it like putting it together with the footage in postproduction?

Muller: There are limited ways of showcasing VR at the moment. I have shown probably close to 500 people on headsets, and I actually spun the chair for many of them so that they could look all around. With that information and physically spinning them I quickly noticed that 99 percent of them were still just looking forward with minimal looking around. We have been programmed to look straight ahead at a TV, a movie screen, or our phones so I believe it will take time to get people used to looking at 360. While I really think there are times to use 360, for the most part you can really showcase much of your storytelling in a 180-degree space. With that said, when people do put headsets on and look in the opposite direction from the previous time, they get an entirely new experience. Imagine being able to watch Star Wars and see it shot from completely different cameras!! How cool would that be! I discovered this when I sent my investor one of the first dailies and he called me to say I had sent him the wrong cut. I told him there was only one cut, and as I said it I realized what had happened. I told him to put the head set back on and look around. Sure enough, he called back laughing. He was so blown away because he had two completely different experiences with the same footage. That was a pretty powerful moment for me.

Filmmaker: Will we be seeing more VR pieces from you in the future?

Muller: There are another eight to 15 films in this series that I just need to edit and finish the post on. We shot so much content, and I cut a single piece of it for Tribeca and to show distributors. Once we find our distribution partner we will take a look at how many more stories we want to tell within the nine massive expeditions already done. Then there are numerous other experiences I would love to still go capture. I just saw footage of a dozen orca whales playing with each other and then devouring a massive bait ball over the course of 45 minutes that I would love to go capture and immerse people in. Then I want to visit that piece of plastic the size of Texas floating between California and Hawaii. Maybe when people swim amongst the trash and see just how much of it there is, they will think differently about how they drink their water and choose glass over a plastic bottle. These little choices we make have massive impacts on this one little planet we live on. We only get one and she’s not doing so well at the moment. I feel it’s my duty to use the gifts I was given to help in any way I can.