“Everything in this Film is Autobiographical, But Then Again Everything is Not”: Asia Argento on Her Debut Feature, Scarlet Diva 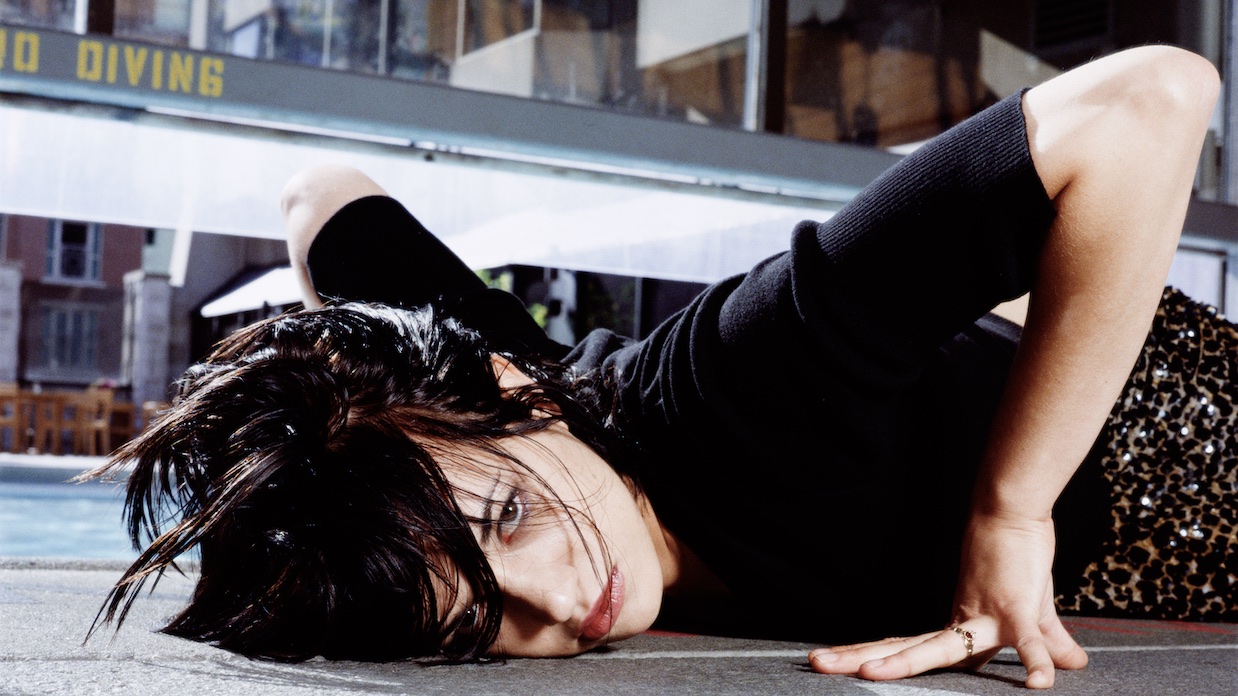 Andrew Garfield in Under the Silver Lake (photo: Richard Kern)

by Travis Crawford
in Actors, Directors, Interviews, Screenwriters
on May 11, 2018

From Filmmaker‘s print issue archives comes this Fall, 2000 interview with director Asia Argento, who discusses her highly recommended and, today, even more vital feature debut Scarlet Diva with Travis Crawford. (Richard Kern did the original photos.) “Mixing humor and self-laceration, Tortoise and Nina Simone, Argento uses the tools of digital video to create a thoughtful aesthetic distance from her own semi-autobiographical lead character,” was our subhed for the piece, which we’re reposting today as the theatrical rerelease of the film opens at the Alamo Drafthouse Brooklyn.

One could be forgiven for approaching Scarlet Diva with a healthy degree of skepticism. The writing-directing feature debut of 25-year-old Italian actress Asia Argento, the film is co-produced by her father, renowned horror filmmaker Dario Argento, and is a largely autobiographical chronicle of young actress Anna Battista and her odyssey through a haze of sex and drugs as she seeks to liberate herself from her self-proclaimed title of “the loneliest girl in the world.”

But those who assumed Scarlet Diva would be a vanity project subsidized by a prosperous parent should be prepared for a shock: the younger Argento’s film is actually a remarkably confident and vibrant work, a colorful and stylish primal-scream ride through life’s excesses that plays like a trip-hop cover of Chantal Akerman’s Les Rendez-vous d’Anna. If Argento’s film is guilty of crimes of self-indulgence (as some critics have averred), then these transgressions are rooted in boundless enthusiasm for the possibilities of cinema — it’s no accident that she cites Alejandro Jodorowsky as an influence — and not empty narcissism. And there’s another element to the film that perhaps nobody anticipated: Scarlet Diva is often riotously funny.

Argento’s film follows Anna as she careens through Rome, London, Paris, Amsterdam and Los Angeles, her life an increasingly chaotic tribulation of failed relationships and the hazards of celebrity: a formerly talented writer friend has now become a bitter heroin addict, and a meeting with a Hollywood producer (artist Joe Coleman) becomes the ultimate casting-couch nightmare. Events seem to change when Anna becomes pregnant by an Australian rock star, but this “impossible love” doesn’t materialize, sending her deeper into loneliness. As the material moves into progressively darker territory, Argento shifts the tone of Scarlet Diva into a hallucinatory overdrive that mirrors the drug-addled Anna’s fever-dream state of mind, but she never jettisons the black comedy that ensures that Anna’s predicaments, however outlandish, remain recognizably human. Argento’s adroit juggling of these multiple stylistic approaches marks her as a filmmaker with a great degree of promise.

Argento has directed before — two short films, and documentaries on her father and Abel Ferrara — but she has become known in recent years as one of Europe’s most popular young actresses, particularly in her native Italy, through the success of such films as Peter Del Monte’s Compagna di Viaggio and Giovanni Veronesi’s Viola Bacia Tutti. Her Italian work however, has been little seen outside of that country, except for the trilogy of films in which she was directed by her father: the American-lensed Trauma, the vastly underrated The Stendhal Syndrome, and the misguided Phantom of the Opera. Although she has appeared in two English-language films — Michael Radford’s long-delayed Miramax-botched B. Monkey and Ferrara’s flawed but fascinating New Rose Hotel — Argento has become most known outside Italy as a Euro “It”-girl and icon of sexual desire, her undraped tattoo-covered form appearing in various men’s magazines which cite her as one of “The 50 Sexiest Women Alive.” Argento’s physical appearance may be striking, but after talking with her for only a few minutes it immediately becomes the least compelling thing about her; one is soon impressed by her intelligence, razor-sharp wit, and passion for cinema. We spoke at the Toronto International Film Festival:

Asia Argento: Everything in the film is autobiographical, but then again everything is not. I think that every film is autobiographical in that you have a very personal reason to tell the story. Even if I were to write a story of Martians coming to Earth, it would have to be autobiographical. But the fact that there isn’t a father figure is a difference. I wanted to save my father, since here I am only talking about the worst things that have happened in my life.

Filmmaker: But you asked your own mother (Daria Nicolodi) to play your horrible mother in the movie!

Argento: I know. But it was an interesting psychodrama for us. I asked her to play my agent in the film, but she wanted to play that part [instead], which was fantastic of her. But I’ve mixed everything, too: the character of the writer is many writers I’ve met; the producer is many producers I’ve met even though that one does remind me of someone particularly.

Filmmaker: And an experience that was similarly horrible?

Argento: Oh, yeah, yeah. It was so horrible it was funny, really.

Filmmaker: So are you really the loneliest girl in the world?

Argento: Not anymore, actually, but I used to be. I was sick for a while; I was agoraphobic. I was afraid to go out of my apartment for a long time, I could only go out to work. But I was not lonely. I was alone. It was my choice — well, I had no other choice. But now I have a love for the first time in my life, and that makes me feel a little less lonely, even though there are some things I know I could never share with anybody.

Filmmaker: Did you ever have a Kirk in your real life, an “impossible love”?

Argento: Sure. And I did this film to be loved by this person, who never read the script, who has never seen this film. And we’re not together anymore — as soon as the film was over, the need for that impossible love was over. When you’re alone and you fantasize about love, it’s the purest form of love. The person needs to be either dead or unattainable, because the other person’s love is going to ruin your love. But now I believe differently, so maybe this film has cured me, or saved me somehow.

Filmmaker: In the past few years, you’ve become one of Europe’s foremost young actresses. What precipitated the move to directing?

Argento: I never acted out of ambition; I acted to gain my father’s attention. It took a long time for him to notice me — I started when I was nine, and he only cast me when I was 16. And he only became my father when he was my director. I always thought it was sick to choose looking at yourself on a big screen as your job. There has to be something crooked in your mind to want to be loved by everybody. It’s like being a prostitute, to share that intimacy with all those people.

Filmmaker: I don’t know, there still has to be a certain nobility to the profession.

Argento: No, no, no. That’s the lie that actors tell to non-actors to elevate a job that’s very easy to do. Yes, of course there’s a nobility in the way that children are noble and sensitive and need guidance. But actors are not noble. On the contrary, like Brando said, acting — not prostitution — is the oldest profession in the world. But if I had any ambition, it was over when I worked with Abel Ferrara — he was always one of my favorite directors, so after that, I had nothing to desire anymore. So I decided to go back to what enchanted me as a little girl, which was writing.

Filmmaker: So do you only want to direct now, or will you still act in other people’s films?

Argento: I’ve gone back to it because I need to pay the rent [laughs]. And it’s a challenge. I just did this French vampire film by Antoine du Caunes, Les Morsures de L’Aube, and I don’t speak French, so I had to learn the language. But I think I’m a better actress now that I don’t have personal ambition, because I work for the film and not to build my own career. I work for the director, like a cab driver just driving his cab, a professional, a mercenary. When you’re directing, it’s years of your life, for one thing, and I think that is noble.

Filmmaker: When are you going to direct again?

Filmmaker: You’re directing it but not acting in it, correct?

Filmmaker: Unlike the works of most young first-time filmmakers, Scarlet Diva seems more influenced by the rhythms of real life than by other films. Having said that, were there films that shaped your approach to the film?

Argento: Actually, another vow of chastity I took before this film was to watch only silent films for one year. I watched every one I could get my hands on. Pabst, Dziga Vertov, Dreyer, the original color-tinted version of The Cabinet of Dr. Caligari — it’s so beautiful it makes you want to cry. Abel Gance’s Napoléon is my favorite film of all time. Apart from these silent films I watched to purify myself, I was looking at a lot of photography. That’s what inspired me the most.

Filmmaker: Some of the imagery in the film reminded me of Nan Goldin’s work.

Argento: Yes, definitely! She’s one of the people I really admire, along with Diane Arbus and Richard Kern. But I wasn’t really thinking of that. Even though I had very clear storyboards, I allowed myself to destroy them on set, and everybody could come up with something if they felt it. This was a freedom that I never had when I worked as an actress with other directors – to bring out the truth from my characters and the location was the only goal I really had in acting.

Filmmaker: Did you take anything from your father?

Argento: I wish I could have his talent with the camera. Horror is much more precise, it’s like mathematics. When he shoots, nothing is left to the atmosphere of the set. He knows exactly what he wants and he’s going to get it. You are just there as an instrument. I love his use of color, and I think you can see that inspiration in my work.

Filmmaker: Scarlet Diva deals heavily with issues of female disappointment towards men. Let me ask you simply, what do women want from men?

Argento: Well, just deal with that genetically. We have a hole that needs to be filled.