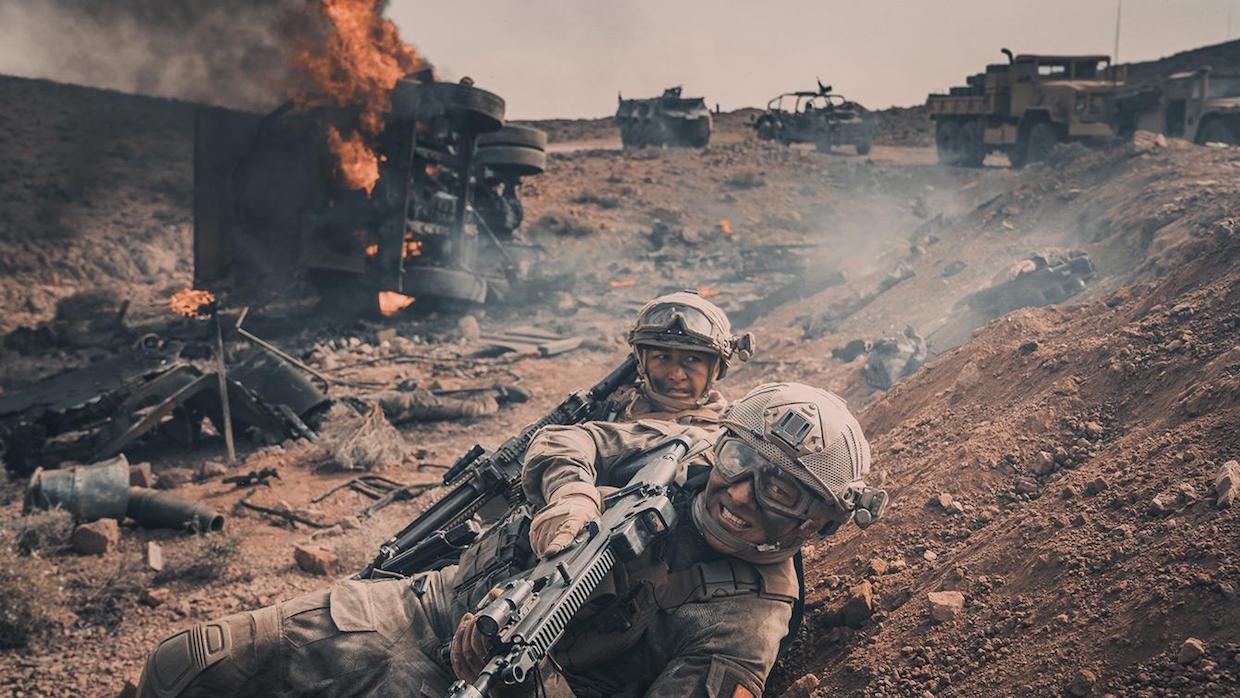 by Daniel Eagan
in Directors, Interviews, Producers, Screenwriters
on Jul 9, 2018

The second-highest grossing Chinese film of all time, Operation Red Sea has earned over a half-billion dollars since its release this past February. Writer/director Dante Lam introduced the film at a New York Asian American Film Festival screening on June 30 and accepted the festival’s Daniel A. Craft Award for Excellence in Action Cinema.

Operation Red Sea is loosely drawn from the real-life evacuation of Chinese hostages during the 2015 civil war in Yemen. In the movie version, Jiaolong, an elite task force, not only have to free hostages, they must also stop an attempt to sell yellowcake uranium to terrorists who plan to make dirty bombs.

Filmmaker: How has the success of Operation Red Sea affected your career?

Lam: Maybe not too much. I’ve always pursued different kinds of topics in the films I direct. I’ve done police films, sports, military. I try to avoid repetition. My next film, about a Coast Guard rescue, is a new genre again. I like to use directing to try out different genres, ideas.

Filmmaker: At least you can have bigger budgets now.

Leung: Not really, because we have three other movies to go, and we already signed contracts for them.

Leung: The project wasn’t as big as you think. The budget was about USD$35 million. The cast was mostly unknown, although they’ve all become stars in China. When we were casting, I’d say 95% turned us down because they were unwilling to work in Morocco for three, three-and-a-half months. We had 101 shooting days. Usually we worked with five main cameras, two more action cams or GoPros, a flying cam and then a helicopter camera, so we could go up to nine cameras a day. For us, it’s a huge movie.

Filmmaker: Early in Operation Red Sea there’s a scene in a war zone where Jiaolong members have to rescue a group of hostages. There’s a point where three soldiers cross a battle-scarred street on zip lines. How did you come up with that sequence?

Lam: It took many tries to make it work. That scene was right at the beginning of the shoot. I didn’t want to use CGI because I wanted the actors to get a sense of the kind of challenge they were facing, the kind of stunts they will have to perform. I wanted to give them a little pressure. We used six or seven cameras to shoot it, so I had a lot of material to work with. In the end we cut it down to three quick shots—one in close on their faces and the other two to establish where they were going.

Filmmaker: Do you see action in your mind before you start shooting? Are you trying to recapture something you’ve imagined, or do you go with how the action unfolds while you’re shooting?

Lam: I do visit the set beforehand and check out what it’s like, and I’ll come up with one or two shots that I think are necessary for a scene. Once we start shooting, I adapt to the actual environment and add cameras where needed. But before we start formally shooting, we always have a kind of rehearsal where the cinematographer is explaining to everyone each individual shot. So, I guess it’s a combination of the two.

Filmmaker: But you’re the action choreographer on Operation Red Sea, so to some extent you’ve designed the action before you even begin.

Lam: Yes, I think of action sequences before I start shooting. For every scene, every process, every movement, I know what I want already. That way I’m in control.

Filmmaker: What’s striking about the action in your film is the trajectory the sequences take—how you work out the geography, the complications, the physical stunts—and how you sustain that drive for up to ten or fifteen minutes at a time.

Leung: In Dante’s films, he works out every step beforehand, so he knows where everything is going and how many shots he needs to cover it. That scene with the zip lines may have taken us seven days to shoot, even though it came down to the three shots he used. The rehearsal for that scene alone took three weeks. We had to block the whole area, and we had to have the police there to close down the nine streets we needed. I objected to the scene, because these are actors, not stuntmen. But Dante convinced the actors to challenge themselves. And of course they were all wearing safety harnesses; we protected them.

Filmmaker: Your films have always featured extraordinary action. In Beast Stalker (2008) there’s a scene where Nick Cheung is being chased by the police through an open-air market. There’s one shot where the camera is in tight on him as he punches a cop and then pulls an awning down on top of him. The action is so furious it’s almost a blur.

Lam: We rehearsed before we shot, but as soon as we got to the market, it was all real action. We had only one shot to get it. It was a real market with real people, those were not extras. They were really surprised to see him fighting the cops.

Leung: We couldn’t afford to block the whole market. We couldn’t even afford to hire extras. We were doing it all in one take, then we had to run before the real police came.

Filmmaker: In That Demon Within, a chase ends when one of the cars crashes into a gas-station convenience store. And then a huge tower collapses on top of them.

Lam: I really like that shot. Some of it, of course, was CGI. We had a small budget, so it wasn’t easy to set up that scene. I came up with the concept and did the design, but then of course the producer had to come up with the money.

Leung: (laughing) The money came out of my pocket. To give you some background, for Beast Stalker, we had less than USD$1 million. For That Demon Within, we had maybe USD$4 million. For that, we decided to put all our money into the ending, to blow up the gas station and also to pay for the CGI.

Filmmaker: So can you talk about how you pace these sequences, the rhythm and timing?

Lam: I used to work as a crew member on set, so I’m very familiar with film production. I know what you can and can’t do on a set, how much time it takes, how hard it is to do. That helps me design sequences. Before the audience gets to see the action, I am designing it for myself. I have to be satisfied with how it moves. It has to build up like a snowball rolling down the hill, like an avalanche. If it doesn’t, I keep working on it. The audience can tell when you’ve really challenged yourself, when you’ve overcome difficulties. They can tell when it took a lot of effort to make a scene, and they appreciate it.

Filmmaker: There’s a remarkable stunt during a car chase in Operation Red Sea. Two cars are speeding down an alley; one hits an embankment and flips over onto the roof of the other. Meanwhile, everyone inside keeps shooting at each other.

Leung: You mean the ending scene, not the one in Casablanca.

Lam: Because my ending scene’s very long, you should say part of the ending scene. It’s where Rock [Wang Yutian] gets shot in the face. I had a car stunt coordinator, a Korean guy, who suggested the move to me. I thought it could complement the gun fight that’s going on at the same time in another part of the city. There was a long stone wall along the alley and we took advantage of that to set up the stunt.

Filmmaker: You make it sound easy.

Leung: That wasn’t even the original idea. The first idea was to have the cars driving down this long set of stairs. There was a long rehearsal, and then we shot it. There’s an explosion at the back of the car, then the chase, and it’s okay—but not up to Dante’s standards. He’s a devil, he’s evil. We cancelled that scene and looked for another location. We had already tried three other ideas before we got to this one, because he is always trying to think of how to do it better. And really the whole point of the stunt is how to shoot Rock, how to injure him to make the audience more emotional. So, Dante wasn’t satisfied until we got this new stunt.

Filmmaker: What is your inspiration for your action sequences?

Lam: I’m interested in reality, in real things. I watch a lot of documentaries—war documentaries, true crime, things like that. Of course I watch films, I study film technique. But for my movies, I want everything to be as real as possible. I find that more effective. For example, in a regular action movie, when you throw a hand grenade, what happens on screen is not what happens in real life. There’s no huge explosion, bodies don’t go flying through the air. I try to show what really happens. And through a lot of tiny details I try to build my movie into something that’s more convincing than other action films.

Leung: That even extends to the sound design. Each weapon in Operation Red Sea has a distinctive sound. Each bullet sounds different, every explosion is different.

Filmmaker: Are you frustrated that your films aren’t recognized in the United States?

Leung: The language is a problem—Mandarin, not English.

Filmmaker: But on a technical level your work is as good as Hollywood movies.

Leung: Speaking frankly, we were in Los Angeles before we came to New York. We talked with several movie executives. All they offer to Dante right now is “Can you shoot a movie in English?” That’s difficult to ask because we are coming from Hong Kong, an entirely different culture. If you want us to shoot 100% in English, it would take us time to master everything—the situations, the settings, the language. And we have to adapt our culture into the American culture. We think of movies as an international language, something we can use to communicate. What Dante is thinking is, why not use actors from different countries? They can come from China or wherever to join with characters in America.

Filmmaker: How long have you been working together?

Leung: I think 14 years as partners. But we’ve been friends for over 30 years. When he was assistant director, I was production manager. We started fighting on that very first movie. I’d be working my ass off until ten o’clock at night. Because he’s so clever, he can go home at seven.

Lam: I was using the American style of working.