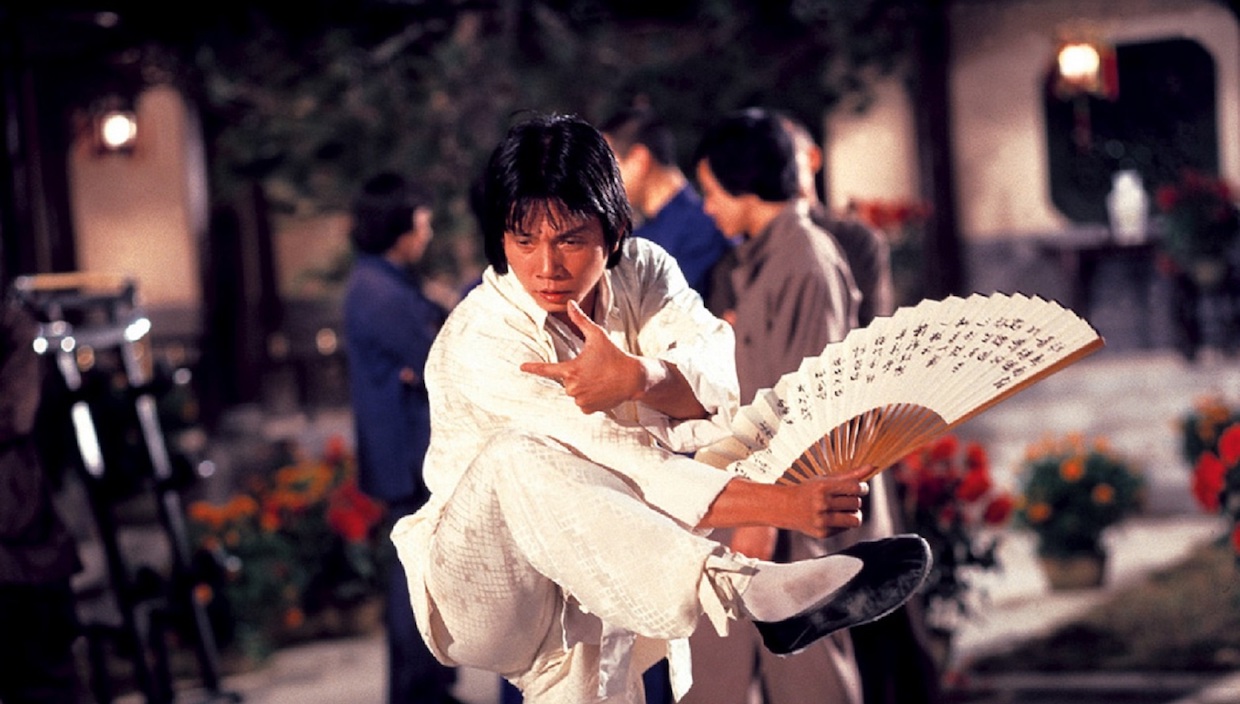 Over a sixty-year career, Lau Kar-leung wrote, directed, choreographed, and appeared in over 100 movies, including martial-arts classics like The 36th Chamber of Shaolin. The Museum of Modern Art celebrates his work in a 10-movie series, “The Grandmaster: Lau Kar-leung,” running July 5–17.

Born in 1937 in Guangdong, Lau entered the movie industry as an extra and stunt man in the 1950s. Trained in martial arts by his father, Lau began choreographing fight scenes, most notably with director Chang Cheh (The One-Armed Swordsman, Golden Swallow). He was the first action choreographer to be promoted to director at the Shaw Brothers studio.

The MoMA series includes some of Lau’s most influential movies: Challenge of the Masters (July 6, 8), about the training of Wong Fei-hung; My Young Auntie (July 7, 12), with Kara Wai as a widow trying to defend her inheritance; and The Eight Diagram Pole Fighter (July 6, 14), with Gordon Liu training in a monastery to avenge his family.

La Frances Hui, associate curator in the Department of Film, and Lau’s daughter Jeanne Lau spoke to Filmmaker Magazine about the series.

Hui: First I should explain wuxia, which is a Mandarin term, and kung fu, which is Cantonese. Wuxia films are filled with fantasy; the movements within them are acrobatic, stylized, very exaggerated. You see elements of Chinese martial arts, but the movements are really inspired by Peking opera. Hou Hsiao-hsien’s The Assassin is a recent example, also Crouching Tiger, Hidden Dragon.

At the Shaw Brothers studio, the director most closely associated with wuxia was King Hu. The action in his Come Drink with Me and A Touch of Zen is almost impressionist, just like Wong Kar-wai’s Ashes of Time. You see a close-up of a fighter’s face, then a flash of a ghostly body flying across the screen, then a close-up of a blade reflecting the sun, and then another wide shot of somebody flying, and then suddenly a close-up of a severed finger on the ground. You stitch together these movements in your imagination to figure out what happened.

Chang Cheh was another Shaw Brothers wuxia director. He was known for very bloody, masculine movies, sometimes with homoerotic undertones. Lau was his choreographer until he was promoted to director. Even though he worked with Chang Cheh for a long time, Lau wanted to do something else, he wanted to make kung fu movies.

Filmmaker: Did Lau have a background in kung fu?

Hui: Well, kung fu refers to martial arts from the south of China. But people never used the term kung fu to describe these films until the 1970s, with the rise of Bruce Lee, the later works of Chang Cheh and others.

The most famous martial arts figure from the south is Wong Fei Hung. His style is known as Hung Ga, or Hung Fist, and is associated with southern Shaolin Temple. Wong Fei Hung was such a revered figure, not just because he was a fighter, but because he was a public figure with strong morals and a sense of civic duty.

Lau’s father Lau Cham studied under Lam Sai-wing, who was a student of Wong Fei Hung. So there is this direct lineage that was a source of pride and responsibility for Lau. He was determined to honor, promote and document kung fu the way he learned it. That helps explain why he was so obsessed with including training sessions in his films. He shot them in almost a documentary fashion.

Filmmaker: But didn’t other directors include training scenes in their movies?

Hui: Not really. Think about Bruce Lee’s movies: whenever he shows up he’s already the greatest fighter ever. Lau, on the other hand, seemed almost obsessed with training, and the amount of time he devotes to these sequences is quite unusual.

There’s also a moral side to them. In Challenge of the Masters, Gordon Liu plays a very young Wong Fei Hung. His master tells him that while he has learned advanced kung fu, he still has to learn humility. You don’t defeat your opponent simply by kicks or fists, you have to win people’s hearts.

There are codes of conduct in kung fu. In a scene in My Young Auntie, Lau is fighting a bad guy whose arm is injured. So Lau tucks his hand into his belt so they will fight on equal terms, not two hands against one.

Filmmaker: How would you describe Lau’s visual style?

Hui: By the time he became a director, he was already extremely well trained on the set about how to design scenes. One thing he did try was to pull the camera back to include more of the actors’ bodies. Lots of medium and long shots, so you can see what’s happening. He also relied on continuity editing. The cuts are not all that fast, and he uses them to build a dynamic rhythm. If someone jumps, the next shot will be the feet hitting the ground to complete the movement. It’s a trajectory that you can see and follow. If you look at something like The Bourne Ultimatum, lots of things are missing between the shots. It’s just a series of really short pieces cut in an almost manic way, and viewers stitch together the action themselves.

Filmmaker: The editing in Bourne movies also covers up what the actors can’t do.

Hui: In Lau’s films the actors are basically kung fu masters. They are extremely confident. They don’t need cuts to hide, say, a hand or leg in the wrong position. They want the audience to see how good they are.

Filmmaker: But Lau’s style is more than just a representation of action on a single plane.

Hui: One of my favorite kung fu scenes is in Martial Club, in which Gordon Liu fights an opponent in a long, crooked alley that has several turns. The scene tracks them from one end to the other, and at every turn the alley gets narrower and narrower until it’s only three or four feet wide. Lau has the camera track with them, but he also shoots from the top of the alley, so you can see how the actors are trapped in this space.

Filmmaker: Why did Lau’s output drop off after the 1980s?

Hui: Lau was closely associated with the Shaw Brothers, and at its peak the studio was incredibly successful. They even built their own Movietown. It had sets and offices and restaurants. Over a thousand people worked there, and several hundred lived in dormitories. But the Shaws stopped making movies in the 1980s. Martial Arts of Shaolin, with Lau directing Jet Li, was one of the last films they produced. Movietown collapsed, the kung fu genre became less popular, and the movie industry turned more to comedies and new wave directors. Lau remained very traditional, very uncompromising about kung fu. If someone wants to play Wong Fei Hung, Lau thought that person should learn Hung Fist. Do movie audiences care if what they are looking at is from northern or southern traditions?

Jeanne Lau: I think later in his career my father was obviously upset about not being able to direct the way he used to. But he was also battling very severe cancer. The doctors recommended that he shouldn’t be doing movies and exerting himself.

Lau: He was a typical dad. Other people thought of him as this powerful martial artist, and apparently he was very stern with people on the set. But to me he was dad. He would cover for me when I got in trouble. He taught me everything about pop culture. He would take me to McDonald’s, and he used to sing along to Michael Jackson with me in the car.

Filmmaker: Were you aware of his career?

Lau: I remember when I was young watching a movie called Mad Monkey Kung-fu and in it he has his hands bashed in with a rod by a bad guy. My sister and I started crying. We were like, why are we watching movies of my dad being beaten up and killed and everything? We were so traumatized that we never wanted to watch his movies. But it didn’t make sense either, because he would be walking around the house fine and healthy while we’re watching him getting beaten up on TV.

Later he made a point of bringing us into his world. He never kept work separate from home, we always knew what he was doing and what was going on. He’d invite us along to events with him. I remember watching things like Drunken Master in the cinema with him. Seven Swords was his last movie. They were shooting in the snow and he contracted pneumonia and nearly died. They had to rush him to the hospital because his temperature was really low. We as a family decided Seven Swords would be the last movie he would do. We didn’t want to lose him.

Filmmaker: Did he teach you martial arts?

Lau: He did. When I was nine he taught me. I never really liked it when I was younger, to be honest, because it’s a very long process. You start with the foundations, the basics, something called the Horse Stance. It looks like a squat, but it’s not really. Essentially it changes your leg muscles to give you a good foundation when you do fighting and kung fu choreography.

Basically he would get you to stand in this squat position, with heavy metal bangles, so there’s weight on your hands. You stick your hands out and squat in the sun for like more than ten minutes. He’d do this months on end until he thought you’re ready to go to the next level and learn a martial arts movement. So it’s a very long process and it’s not very fun at the beginning. It takes years for people to master even one form.

Filmmaker: That training must have given you insight into his movies.

Lau: Basically my dad’s philosophy was that he would always let the villain redeem himself. He wouldn’t just kill the villain in his movies. Mad Monkey is a great example of that. The villain does these atrocious things, but in the end the hero protagonist just lets him off, because he defeated the villain’s corrupt morality and tried to make him redeem himself rather than kill him outright.

My dad made the same point when he taught his students. If someone wanted to learn from him for the sole purpose of harming people or fighting people in the street he would never teach them. He had to really make sure the person had a great moral character so he wouldn’t waste his time teaching them. That’s what he used to tell me.

Filmmaker: You’ve taken the same approach in your own career.

Lau: After my dad passed I had this sense of pressure. No one else among his children ever learned kung fu. I’m the only one, and a girl as well, trying to continue his legacy and pass it down to my kids.  I don’t have a school, but his students have opened schools around the world. There’s one in England, Amsterdam, several places in Europe. The idea is to spread his form of martial arts globally. So my goal is to continue his legacy by teaching others about his kung fu. One of the ways I can do that is through my acting career as a martial arts performer.