“We Can Do Whatever We Want”: The Makers Of The Podcast Mission To Zyxx On Doing Indie Sci-Fi Comedy On The Cheap 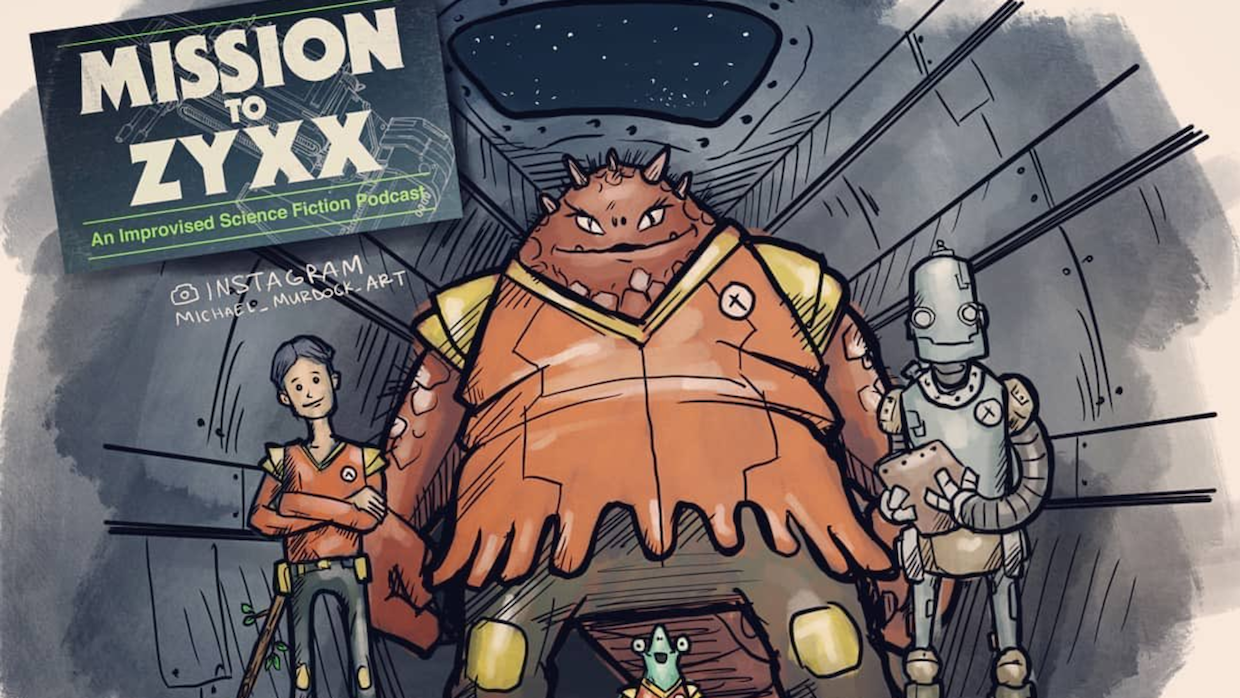 Sound-only projects got an entire day at IFP Week 2018, which may irk sticklers wondering what podcasts are doing in a seminar once dedicated solely to film. Well, as more and more filmmakers consider themselves some-kind of cross-platform storyteller, podcasts are natural medium for their work. (See, for example, this Filmmaker article on filmmakers embracing that medium.) And, IFP itself added audio storytelling as one of its main areas of interest earlier in the year. To boot, independent aural projects and independent cinema share a lot of similar concerns, aesthetic as well as financial. Take Mission to Zyxx, an improvised sci-fi comedy podcast about to wrap up its second season. Created by comics who met at improv hub Upright Citizens Brigade, and recorded out of Brooklyn, it could only exist as an inexpensive, home-made (although professional-sounding), aural entity, free of pricey special effects and meddling execs.

“The thing with podcasts is we can actually do this,” said Moujan Zolfaghari, Zyxx’s co-creator and one of its six main performers, at an IFP Week case study panel on the show. (She voices a sentient ship.) “We don’t have to have billions of dollars. We don’t have networks recasting us because we’re not hot enough. We can do whatever we want.”

Within reason, of course—but there is freedom in limitations. The show follows the journeys of an interstellar crew of ambassadors. Each episode follows a basic, Star Trek-y template, of our heroes visiting a planet, realizing it’s dangerous/bad/annoying, then leaving. Following that basic structure gives them a good excuse to bring on a guest each week.

“We thought it would be easier to have a guest if we were traveling to places each episode. It can be someone we meet,” said Jeremy Bent, another co-creator, who voices a droid he describes as “C3PO if he hated humanity.”

That allows them to show off New York’s rich comedy scene—always second banana to the one in Los Angeles. It also allows them to broaden their fanbase. If they bring on a fellow improv-er with a sizeable following—or someone legitimately huge, like Paul F. Tompkins—their fans may follow him over to Zyxx, may enjoy the episode, then may go back to the show’s first episode, then may subscribe.

Zyxx began with Bent and Alden Ford, a fellow comic, and their love for the podcast Hello from the Magic Tavern, a fake interview show held in a Middle Earth-/Narnia-ish fantasy world. “We thought, ‘What could we do in a sci-fi setting that allows us to take our strengths as improvisers, but also our love for genre comedy?’” recalled Ford, who’s the show executive producer, co-editor and plays the audience surrogate, which he calls a “shitty Luke Skywalker.”

After wrangling others, they recorded a pilot, then shopped it around. “A lot of people rejected us,” Zolfaghari said. But Zyxx wound up at Audioboom. Throughout, they’ve learned about the competitive and advertising-heavy world of podcasts.

“Distribution with podcasts seems to be about where they can fit you into selling advertisements—how they can work with their sponsorship platforms,” Ford explained. Audioboom has mostly allowed them to record their own commercials their way. “Most podcasts aren’t fictional, so most brands expect you to do regular endorsements. We thought it would be fun, since our show is fictional, to have our characters plug the products.”

“It turns out some companies don’t like that,” Bent added.

Even though they have a sizable parent company, who host their episodes and promote it, that’s not enough to sustain the show financially, given the budget isn’t simply three people in a room talking. The show has sound effects, plus a cast of six, plus a guest each week. They wound up signing up with Patreon, where fans can subscribe to give monthly payments. Even with that, they are not swimming in money.

“We are affording the show,” Bent said, with a gallows humor laugh.

The big mission, they all say, is to create something that sounds not only professional, but like a sci-fi show that just happens to be improvised. “We try to make it a completely ridiculous story that takes place in a world that takes itself very seriously,” Ford said. “We want it to sound like a real sci-fi property. Then because it feels real, then it’s more fun to be in that world with these crazy people.”

A recording session will involve an hour to an hour and a half of improvising. That is then cut down to 30 or so minutes. That version is then sent to their sound guy, Shane O’Connell, who also records it. He adds effects, and makes it sound legitimate. They either record at Braund Studios in Greenpoint, Brooklyn, or in O’Connell’s house. Getting professional audio while not stifling creativity requires a tricky balance.

“The most important thing in capturing the performances is to be as unobtrusive as possible,” McConnell said. “If we wanted incredibly pristine audio, everybody would have to be in a booth or have some crazy thing around them.” But that would damper, if not kill, the improv.

“We realized early on that there’s all these intangibles when you improvise: with your body language, with your eye contact, with your inflection,” Ford explained. “When you can see each other, you can say less, you have more of a shorthand with each other. That’s true on stage, and that’s true when we’re recording. Early on, we realized it’s worth it to sacrifice a little bit of sound quality to be able to see each other and interact in a non-verbal way.”

Zyxx may be all-improvised, but the finished product is incredibly polished. In the edit, every single line is trimmed, to keep the pace going. There’s a John Williams-y score, by Brendan Ryan; at the beginning of each season, Ryan sends them a batch of new music, which they stitch throughout each episode. They have a British narrator, Jeremy Crutchley, whom none of them have ever met, who reads each episode’s opening crawl.

They also have O’Connell, a jack-of-all-trades, who just happened to be the engineer at Braund Studios when they went in to record their first episode. When crafting his sound effects, he thinks of the show as a classic radio drama.

“I’m always thinking of ways that new technology can update radio drama tropes and standard processing,” O’Connell explained. “Podcasts have taken over a lot of ear real estate that used to be primarily for music. You have your phone in your pocket while you do the dishes, and you listen to your thing. The show is it has to work if the phone is in your pocket, and you’re only able to hear the voices. But if you choose to devote your full attention to the show, with headphones on, it should still yield results. That’s what excites me about music right now: when you’re really paying attention and think ‘Wow, someone really thought about that little thing.’ I want you to hear little throwaway jokes in the quietest areas of the show.”

Sometimes it takes months for O’Connell to finish a show, though the production process is, he admits, as cheap as possible. (“For now!” interjects Ford.) A lot of his folly sound effects come from Adobe, which gives away a free sound library. “Almost everything in the show is me combining sounds in weird ways,” O’Connell said. “Because it’s not a visual show I try to use familiar sounds to paint the picture. For instance, a spaceship is not going to have an idling sound. It’s not going to sound like a truck. But I need that sound in there.”

Ford admits they’re in the “we’re still growing our audience” stage, but that each episode tends to get 70,000 to 80,000 listeners—half those when each episode is up, half over the following two weeks. Around three-and-a-quarter million have listened total. The first episode has the most listens of all, then it tapers down a bit. But they’re all encouraged that most people who listen to the first three or four tend to stick with it.

“It definitely could be bigger, and we’re always trying to find new ways to grow our audience,” Ford said. “But we feel around that point where we can say, ‘These listeners aren’t going anywhere. They just want us to make more episodes.”