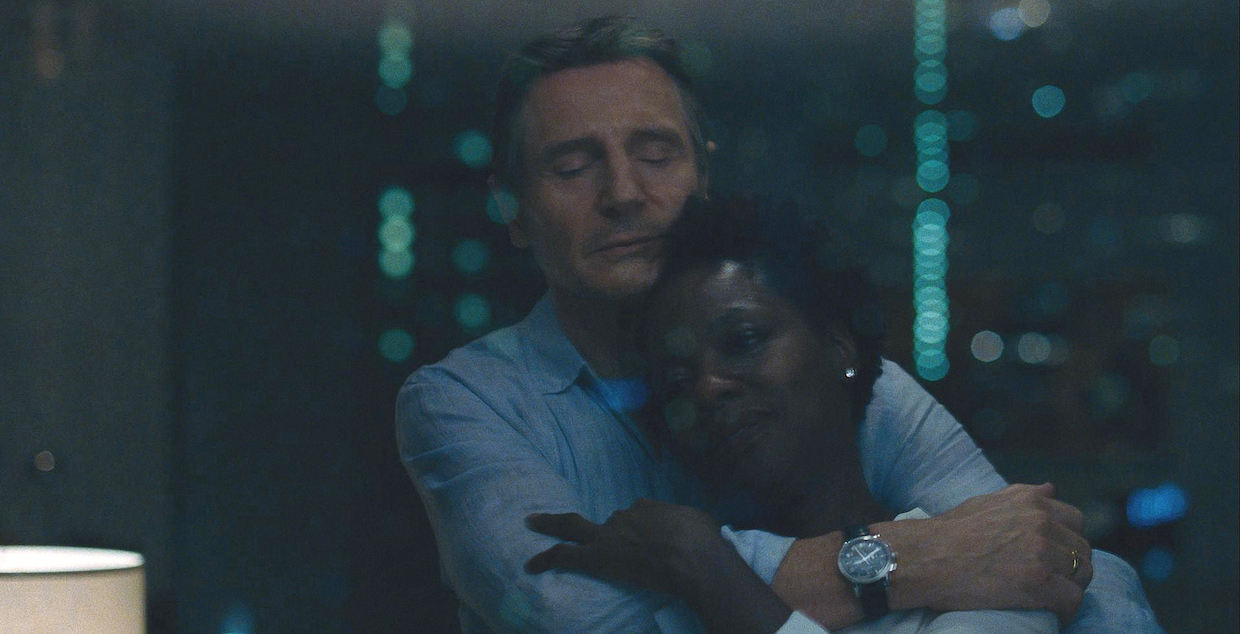 “A stroke, and then a slap,” says editor Joe Walker. That’s how director Steve McQueen described the tone he wanted in the opening scenes of Widows. The movie opens with a remarkable sequence, intercutting glimpses of the main characters’ family lives with images from a horrifically bloody heist gone wrong — showing, in effect, how four of the women at the heart of the film become widows. So, for example, we see Viola Davis’s Veronica Rawlings passionately kissing her husband Harry (Liam Neeson) and then suddenly we’re in the back of Harry’s van as police fire on it. We see Elizabeth Debicki’s Alice, her face bruised, sitting at the breakfast table with her abusive husband Florek (Jon Bernthal) as he eats and casually tries to make amends — and then we’re again in the middle of the abortive heist, where he’s just been wounded. Over and over, we’re emotionally whipsawed between these quiet, though not entirely peaceful, visions of domesticity — the strokes, if you will — and the cataclysm of fire and bloodshed that claims the men — the slaps.

In some ways, this opening juxtaposition represents the entire movie, which is an intimate, multi-character emotional drama shot through with shocking violence and heart-stopping suspense. “Steve wanted to draw out the inner tensions in these relationships, because you have to set that up quite quickly,” says Walker, who’s worked with McQueen for 11 years, dating back to the director’s debut feature Hunger. The editor points to the moment right at the start when, as Veronica and Harry kiss, the husband playfully lurches toward her — right as we cut to gunshots in the back of the speeding van. It all happens so quickly that we might wonder whether we simply imagined the lurch. A clever way to grab our attention, to be sure, but it also hints at an unspoken darkness within this relationship, which the film will eventually confirm.

Although most of Widows’ story is told in linear fashion, Walker and McQueen like to dislocate us temporally throughout – flashing back, replaying certain instances, stretching others. “It’s one of the great things about working with Steve — you get to play with time,” observes Walker. In her mournful solitude, Veronica often sees brief flashes of Harry, and it can be hard to tell whether we’re watching flashbacks or hallucinations. It’s a moving depiction of grief, but it also suggests that Veronica misses closure in her life. When she looks at a reflection of herself, she still sees Harry behind her, almost as though she can’t imagine her own identity without him. The film’s story represents, in some senses, her attempt to break free of his memory.

Walker and McQueen also focused throughout on making sure that even secondary characters had a sense of an inner life. “We wanted to calibrate things so that while the movie was a good rollercoaster ride, everybody also had their moment,” he says. The editor values the freedom he gets from McQueen and director of photography Sean Bobbitt’s willingness to work in long takes. “One of the pleasures of their style is that it lends itself to taking quite bold cuts. Because sometimes, it’s best not to cut away, and let the audience get drawn into the screen.”

He points to a scene featuring David (Lukas Haas), a somewhat sleazy businessman Debicki’s Alice starts seeing after her husband’s death. David seems like a ridiculous character — the kind that a movie like this might easily mock — but Walker notes that he and McQueen got excited about giving him some brief redemption. “There’s a part in their first meeting where she says, ’Say something reassuring,’ and he says, ’I feel lucky to have met you. I hope you’ll feel the same,’” Walker said. “We held for a bit after he said that line, so that the audience could look at him through Alice’s eyes briefly and think, ’He’s good, he’s good.’ He manages to charm us a little right there.”

McQueen likes to stick with his collaborators from film to film: Walker and the director have worked together long enough that they can finish each other’s sentences and thoughts. But Widows was a challenge in a variety of ways. “A lot of things have changed over the years. On Hunger, we had maybe four or five speaking parts, and most of it was within four walls. On Widows, we have 81 speaking parts and, originally, 146 scenes, with locations numbering in the 70s.” And unlike with previous projects, Walker wasn’t present during production, as he was busy editing Denis Villeneuve’s Blade Runner 2049. “Normally, I’m either on set or following the dailies from day two,” he says, which allows him to make suggestions during the shoot. But this time, by the time the editor came on board, McQueen had already shot most of the picture. “It was strange going from Blade Runner 2049 on a Friday to Widows on a Monday,” Walker chuckles. “But you know what they say: A change is as good as a break.”