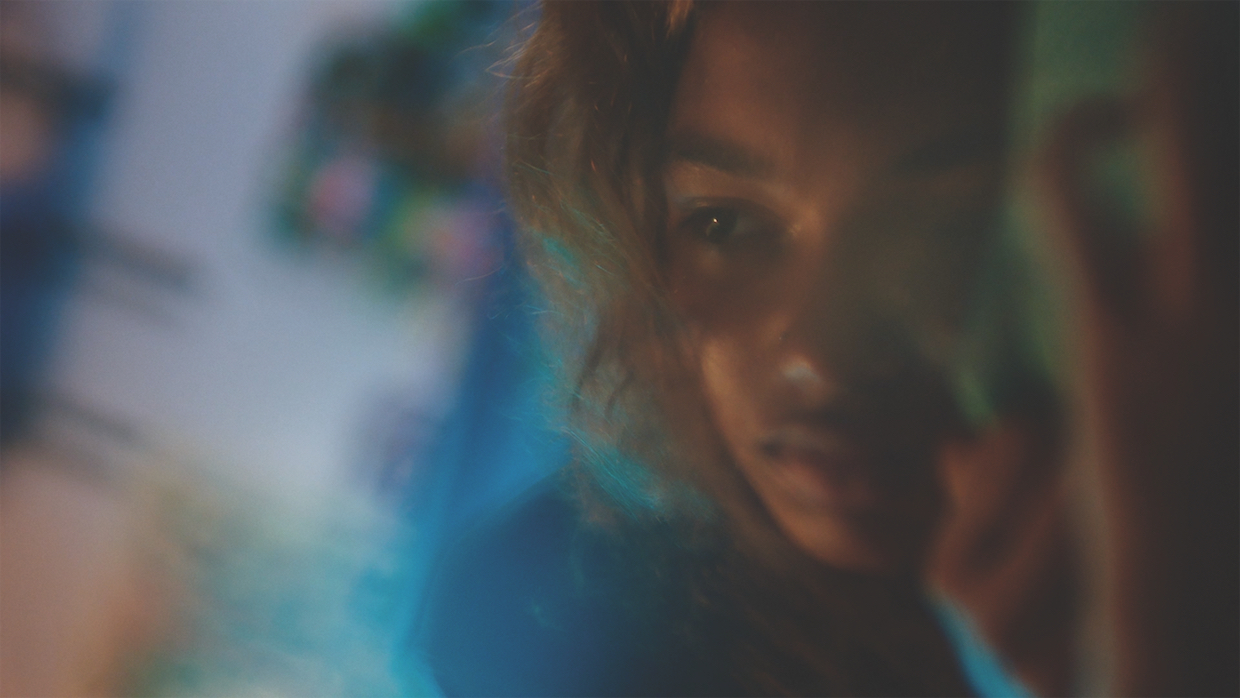 Happy as Lazzaro, Madeline's Madeline, Mug, Nancy, Never Goin' Back, Oh Lucy!, Rafiki, The Pain of Others, You Were Never Really Here, Zama

The films on this list represent only a small fraction of films from 2018 directed by female identifying filmmakers ranging greatly in production from impressive big budgeted masterpieces, to smaller, spirited low-to-no budget indies. One thing that emerged more than in recent years was that many films on this list implicate the audience in their inquiries and creativity; they reach into the senses to make sense of our unmoored present to provide meaningful connection. These directors remind how human the medium of film is and how our choices as an audience make us just as responsible as the filmmakers, artists, and leaders we entrust.

10. Rafiki (dir. Wanuri Kahiu)
The controversy surrounding this film has distracted much from the film itself. Rafiki was banned in Kenya, its country of origin, for promoting homosexuality; the ban briefly lifted to qualify it for the Oscars. Inspired by Monica Arac de Nyeko’s short story “Jambula Tree,” the film is the voice of a new generation that reverberates with notes of classic Greek and Shakespearean tragedies: two lovers are separated by society, circumstance, and family. The film’s strength lies in the way it captures the essence of first love, an elated hum of excitement, exuberant swagger and mutual understanding that becomes even more electric when that love is forbidden. The film expresses raw pain but also notes of joy, an emotional space delivered with rare intensity that speaks to a future filled of possibility on and off screen.

9. The Pain of Others (dir. Penny Lane)
Does the internet force one into a completely narrow, narcissistic world or does it bring the entire world together to a place of understanding? In this documentary, Lane explores this contradiction through the YouTube channels of women publicly dealing with their Morgellons diagnosis, a rare and misunderstood affliction whose symptoms range from neurological complications to bits of fiber emerging from fingertips. The film is also interspersed with news clips, each broadcast presenting sparring truths about the shadowy disease. One is sucked into a YouTube vortex of contemporary media culture where facts and fictions, trust and fear, are all yelling for attention, validation and stats. Lane explores this space with a creeping sense of control and sublime editing that is just as mischievous as the frightening questions raised within the film.

8. Nancy (dir. Christina Coe)
Nancy, a women who detaches from her boring life as a caretaker and office temp through writing and internet lies, thinks she might be the kidnapped daughter of a couple still searching for their long lost baby. One can easily stop themselves from being submerged in the film’s play-like quality but, if one lets themself into this alternate reality where dinners are intricate fields of character study and glances full of lived experience, the film becomes something else entirely. The performances are an exquisite affront, full of earnest, bleak emotional outpourings; the music lays a bed of expectancy; the art direction is orchestrated as still life, reflections bounce off surfaces as the camera remains a window into worlds seen and unseen. Coe’s measured hand can be felt in every piece of the film with an assured aim towards perfection.

7. Never Goin’ Back (dir. Augustine Frizzell)
A film that balances bodily humor with a caring exploration of underprivileged Texan youth. Angela and Jessie are high school dropouts who dream of eating donuts on the beaches of Galveston, each step towards their fantasy resulting in two steps back thanks to drugs, robbery, delinquent brothers, and more. Frizzell’s direction is exacting as each scene or sequence — a montage of backstory, a POV of being high af, a transformative entrance into an air-conditioned grocery store — is sharply placed for maximum momentum, set to a crucial soundtrack that only adds to the propulsion. The two young stars carry the film with a raunchy freshness and hilarious tenderness that feels like scrolling through a stranger’s Instagram. Frizzell brilliantly devises a millennial genre of nowness that also feels timeless in its humanity, heart and hopefulness.

6. Oh, Lucy! (dir. Atsuko Hirayanagi)
A gray train platform in Japan contains rows of commuters as they await the approaching train, a man grabs a woman’s breast, says “Good-bye,” and jumps to his death leaving the woman standing stunned; gasps and cell phones fill the air. This is how Oh, Lucy! introduces the title character (aka Setsuko), a lonely middle middle-aged hoarder living out her days in an office cubicle. When her young niece disappears to America to follow her English instructor (a particularly dopey and unexpectedly witty Josh Hartnett), she and her estranged sister set out to California to find the young girl. The film rides on the talent of actress Shinobu Terajima, in one of the most overlooked performances of the year, and who inhabits this dark comedy with deadpan perfection oscillating in her empathy, disdain and desire. With this debut feature, director Atsuko Hirayanagi crafts an adroit emotional landscape through intense yet natural character development and situational poise.

5. Mug (dir. Małgorzata Szumowska)
While building the world’s largest Jesus statue, a tragic accident causes Jacek to become the first Polish man to receive a face transplant, challenging his attractive heavy metal persona and his recent engagement to longtime punk girlfriend. The film flits around issues of nationality, progress and religion through bitter moments of humor and slaps at notions of capitalism and racism with an abrupt sting of realism. The actors balance upon a tightly wound tone, visually emphasized by center-focused frames that blur outwards, pushing the surrounding babble of images away to hone in on the person at the center of the story. Mug expounds on the exterior and interior displays of selfhood in an increasingly surface-obsessed world with a sly smirk of control from a very ambitious director.

4. You Were Never Really Here (dir. Lynne Ramsay)
Lynne Ramsay’s latest masterpiece is a blunt, sparse film whose economy of image and words holds back acts of violence and explanation, favoring extreme aftermaths and audience engagement. The dialogue is minimal and succinct, the writing flutters between tears and laughs. Joaquin Phoenix — and the whole film — moves with a deft elasticity from scene to scene to beyond. Joe (Phoenix) suffers from PTSD, a hit man on a renegade mission to stop the trafficking of a little girl. His being spits forth in rapid bursts set against an extremely withholding narrative, resulting in an audience chokehold; viewers are forced into Joe’s psyche, a mind riddled with conflicting values and experiences. The audience actively participates in the chilling past, present and the invisible spaces Joe haunts: aching, terrifying, and precise.

3. Happy As Lazzaro (dir. Alice Rohrwacher)
An elegy to concrete, an ode to virtue, this fable expresses a simplistic innocence as otherworldly moments evoke powerful connection. Like Rohrwacher’s last narrative feature, 2014’s The Wonders, the freedom of childhood imagination glows forth as the director delicately toys with time and place. The title character toils in a tobacco plantation, feverishly falling into oblivion and reawakening years later to find himself untouched by age. His old life vanished, he treks to the city to find remnants of the familiar. Shot on dreamy Super 16 the audience transports to a feeling of awe and regret as the modern world tries to erode the hopeful trust of the young boy. Viewers become Lazzaro, marveling in the joys of shared visions and the bountiful gifts of nature and humanity that so often wither with the demands of a complex, contradictory world.

2. Zama (dir. Lucrecia Martel)
Don Diego de Zama struggles to break from the surreal annoyance of his existence, a Spanish officer trapped in an acerbic, satiric bureaucratic loop within a decaying 18th Century South American colony. Timeless, hazy scenes ease in and out as shot compositions are repeated, exotic animals roam into the frame, poorly powdered wigs scale heads, indigenous tribes lurk, as do ghosts of past and present. The instability of Zama is transferred through the senses as Martel engages in a holistic filmmaking — the sound alone is so composed that each cricket seems individually plucked for its timbre. Instead of lulling into a barren dreamscape, Martel creates a fluid and full one letting the audience absorb the film through their entire being, implicating them in the ongoing confusion of reality that is cinema and, perhaps, reality as well.

1. Madeline’s Madeline (dir. Josephine Decker)
The spongy line between actor, director, and audience stars in this masterful collage of expression and artistic responsibility. An experimental theater director and young actress get lost in their creations while the young girl’s mother, rooted far into the real world, tries to discern the border between truth and beauty. Decker pushes the boundaries of bodies, minds and camera as she actively glides along the liminal space that separates the onscreen and offscreen. In an era when representation continues to take center stage, Madeline plays with it like a cat with a string, pouncing and purring with an ecstatic energy that reminds how filmn– and most art– is very much a living, human thing that is collectively shaped and molded and in turn, molds and shapes the lives of others. A reminder of the fragile trust inherent in creativity that should always be handled with the utmost care.