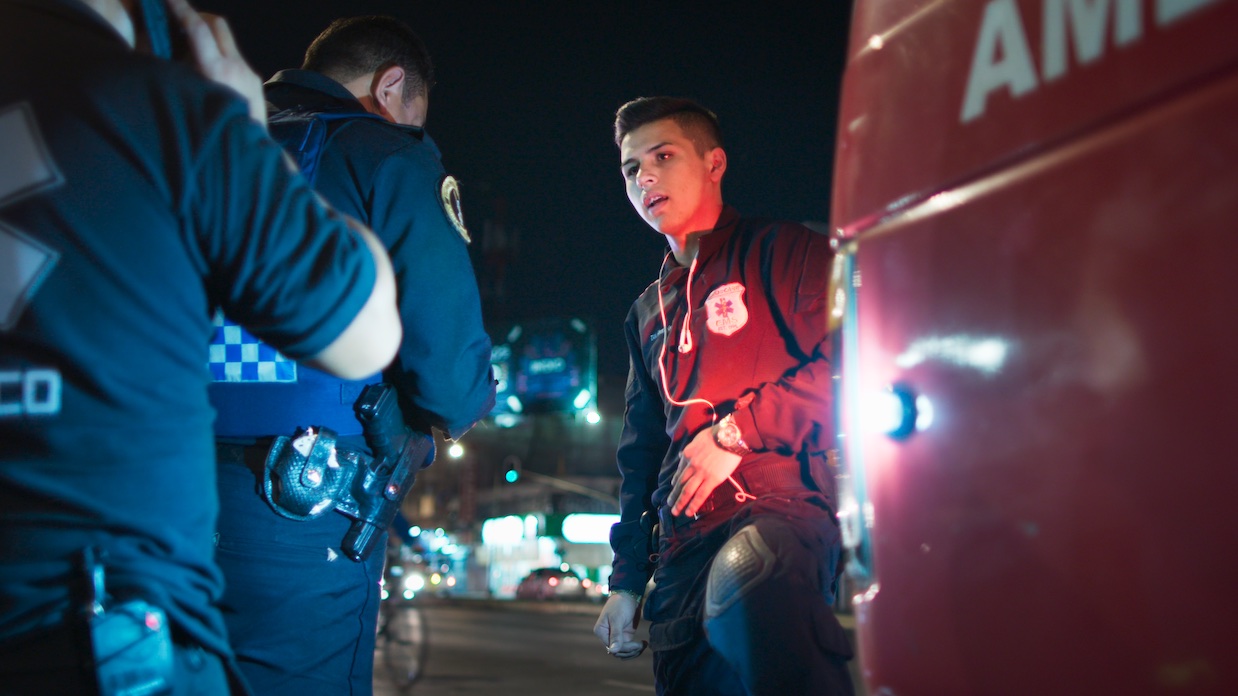 Poetically composed and effortlessly segueing between graveyard-shift stillness and chaotic rides through the darkened streets of Mexico City, Midnight Family is a unique cinematic gem. Director Luke Lorentzen spent nearly three months embedded night after night in a private ambulance run by the Ochoa family, an all-male team who race to the scenes of accidents hoping both to save lives and get paid by those they aid.

Filmmaker caught up with the award-winning director to discuss this rare glimpse into an incongruous underworld characterized by equal parts heroic acts and monotonous labor prior to the doc’s January 27th premiere at Sundance in the U.S. Documentary Competition section.

Filmmaker: So this is certainly a story I’ve never seen portrayed onscreen. How did you meet the Ochoa family in the first place?

Lorentzen: I moved to Mexico City just after graduating college with an idea for a film. That idea went out the window very quickly after I met the Ochoas and their ambulance on a street corner outside of my apartment. With all of them hanging out of different doors, I could tell it was a family-run ambulance, and I was curious enough to strike up a conversation with them. I eventually asked if I could ride along for a night to see them work, and what I found was completely jaw-dropping. I knew there was a film to be made.

Filmmaker: I’ve been aware of your work since 2014’s Cinema Eye Honors shortlisted short Santa Cruz del Islote, which follows a fishing community in Colombia. And this latest, of course, is a portrait of a family in Mexico. Which makes me wonder how a guy originally from Connecticut is able to gain the trust of your subjects. I’m guessing you speak Spanish? Do you employ local crews?

Lorentzen: I do speak Spanish, which certainly helped, but I think my approach as a one-man-crew also allows for a connection that goes beyond just speaking the same language. So much of building trust comes down to spending an enormous amount of time with the people I’m filming. I return day after day over the course of months, and I try to smile a lot and have fun with the people I’m working with. We have experiences together, a friendship builds, and the camera slowly fades to the background.

With my short Santa Cruz del Islote I went fishing with two fishermen everyday for a month despite only needing about 10 minutes of fishing footage. With Midnight Family I spent over 80 nights sleeping, eating, and essentially living in the ambulance with the Ochoas. I was of course there for the exciting stuff, but the trust really builds when it’s 6:00 AM, we’re parked on a dark street corner, nothing is happening, and for some reason I haven’t gone home yet.

Filmmaker: I’m also curious to know how you went about getting the permission of the patients and their relatives who the Ochoas aid and then charge for those services. I’m not sure many people would agree to be filmed during a life-and-death emergency.

Lorentzen: This was something I took very seriously throughout production, and it took weeks of being in the ambulance with my camera before I figured out an approach that I felt comfortable with. For the first two weeks of shooting, I didn’t even put a camera in the back of the ambulance with the patients at all. I would only film the ambulance drivers and their conversations as I played around with how limited the viewer’s access could be to the patients without missing the emotional experience of what was happening.

I eventually started to film more broadly, as I met many patients, as well as their friends and family, who were surprisingly comfortable with the camera — far more people than I would have guessed. I still decided to never film patients directly. I tried to keep the camera focused on the paramedics or the people around the patients. I didn’t want to make a film that indulged in the horrible images of these accidents, and sometimes restraint and holding back yields a far more meaningful and engaging result than showing everything.

All this being said, even if a patient’s face and identity wasn’t revealed, I still wanted their consent. This happened more or less on a case-by-case basis. Some patients would enter the ambulance and ask me to stop filming right away, and I would quickly put the camera down. Others would be totally fine with me filming, and I would then try to connect with them after things calmed down to explain the details of the project.

Filmmaker: The doc also struck me as potentially complicated in terms of production logistics. How many cameras were involved? How many hours of footage did you end up sifting through?

Lorentzen: This was definitely an overwhelming film to shoot, but it was also very fun. What saved me was the repetition of the Ochoa family’s routine. They would more or less do the same things every night, and that let me film in many different ways before finding an approach that worked. I used a ton of duct tape, lots of on-the-fly fixes, and I’d get home every morning after a night of shooting with my hands pitch black with dirt and grease. I was challenged in every way imaginable – physically, emotionally, intellectually, ethically – you name it.

I was a one-man crew, but I shot the film with two Sony FS7 cameras that would roll simultaneously. One was mounted on the hood of the ambulance with an industrial suction-cup mount, and the other camera was with me in the back. It was a complicated setup that didn’t always work perfectly, but I knew that I needed to capture multiple spaces at once to tell this story properly.

I ended up shooting about 400 hours of footage over the course of three years, but amazingly a good 60 percent of the film came from a one-week period of shooting in January 2018.

Filmmaker: You also capture the endemic corruption, mostly from extortionist cops, that the Ochoas face every night. Though the police are only shown from afar, I can’t imagine they’d react positively to being filmed. How did you ensure the safety of everyone involved during production? Were there times when the camera had to be put down?

Lorentzen: For the majority of filming, the police were surprisingly quite calm about the cameras. They were often more focused on the ambulances and patients and less concerned about me. Many of the bigger accidents would have lots of press already there, and the police were used to it. That being said, I often put the camera down — maybe one out of every two accidents wasn’t something I was comfortable filming. This was usually out of respect for patients.

There were definitely moments when things got more crazy. I had all the proper filming permits that I needed, but police would sometimes ignore that paperwork and still demand money from me. On one occasion, my camera’s media cards were actually stolen by a police officer, but the Ochoas were able to get them back for me. Lots of yelling was involved.

In general, the Ochoas were very conscious of keeping me safe. If we arrived to an accident in a dangerous part of town, they would tell me not to film. They also knew absolutely everybody. Once people started to know me as part of their clan I felt very well-integrated into their community.

The Ochoas’ safety was also something our team began discussing from a very early stage. From a production standpoint, they were very good at setting limits for what I could and couldn’t film. There were definitely times when they asked me not to film a specific police officer or accident, and I was quick to stand back. I was also sure to show an edit of the film to the Ochoas before we locked picture. They had given me such an enormous amount of access into their lives that I wanted to make sure they were comfortable with what the film showed before it went out into the world. It was a very nervous day for me, but they loved the film and didn’t ask for any changes.