“The Harder Life Was for Us, the Stronger the Images Were:” Director Hassan Fazili on the Perils of His Flight-from-the Taliban Doc, Midnight Traveler 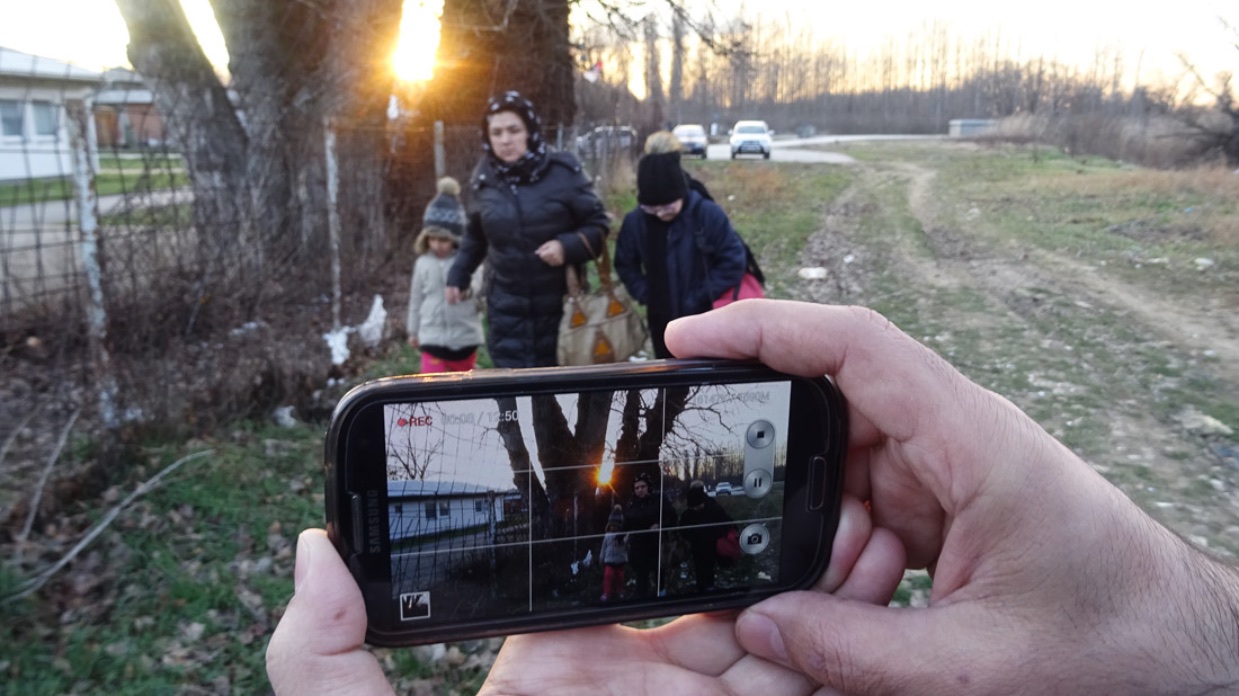 As headlines blare possible peace talks between the U.S. and the Taliban, and with its intersection of politics and filmmaking, Hassan Fazili’s Midnight Traveler, which premiered this week at the Sundance Film Festival in World Documentary Competition, is bound to be one of the festival circuit’s most discussed pictures this year. (It travels next month to the Berlin Film Festival.) Midnight Traveler charts the Fazili family’s escape from the Taliban after Fazili became the group’s target due to his controversial documentary Peace. Fazili, with the help of his filmmaker wife Fatima and daughters Nargis and Zahra, filmed the story of his family’s perilious, multi-year journey through the Balkan route and across Europe entirely on camera phones. A deeply humanistic, intimate family portrait, Midnight Traveler is all the more impressive for being made while the filmmaker was surrounded by high-stakes risks at every turn.

Due to ongoing visa and immigration problems, Fazili was unable to attend Sundance for his film’s premiere. Filmmaker conducted the below interview with the director via email, and it was translated by Midnight Traveler’s producer/writer/editor Emilie Mahdavian.

Filmmaker: You and your family have shot this entire film on three iPhones. But the footage still seems to have a unified voice and vision. How did you establish that consistency over such a long and unreliable period?

Fazili: All of our phones were one brand, and I tried to set them up similarly. I shot most of the footage and also guided and checked the footage shot by Fatima, Nargis and Zahra. Still, I felt in the initial assembly that the images didn’t feel like one vision. It wasn’t until post-production, when the sound design and color grade happened, that many of the weaknesses of the images were corrected and the film appeared consistent.

Filmmaker: While this film is important for the world to see, it captures a time in your life that you and your family probably want to leave behind as you build your new lives elsewhere. So how did you, as a filmmaker, negotiate this in your head: deciding to document such a tough period for your family and preserve it in a film?

Fazili: I feel that our family’s experience is not unique to us and is an important part of human history and must be preserved and seen by all. I always thought that I had to honestly record like a historian and not hide things from viewers because of my personal issues. But sometimes I do wonder whether I should have made this film, because after this, my family must begin a new life and forget all the problems we suffered before. I worry about this problem because I am caught in between two different ideals. As a filmmaker, I feel I must document some of the problems in the world so that future generations will know about the time we live in. As a father and a family member, sometimes think that I’ve done wrong and sometimes I think I’ve done right.

Filmmaker: In what other ways did you find your roles as a father, husband and filmmaker clash while you were capturing your family’s earnest experiences?

Fazili: The more problems my family experienced, and the harder life was for us, the stronger the images were. In some scenes, I enjoyed shooting the beautiful images but was simultaneously crying behind the camera. Sometimes when my family was afraid they looked to me for safety. I tried to make myself look strong, but I myself was afraid and didn’t know where to find safety. I was ashamed of myself that I could not do anything for them. I hated myself; I hated the cinema; I wanted to break the mobile phone and beat myself, but I was comforted by the idea that we did not have a role in creating these problems, and this is not my fault, and then I was able to work again.

Filmmaker: Could you talk about shooting constantly over a nearly two-year period, and, yet, being able to cut hundreds of hours of footage down to a feature-length documentary?

Fazili: One of the good things in this film, in my opinion, is that the editor, Emelie Mahdavian, is a part of it. For three years, Emelie has been there with us and she knows us well. In each country, I sent the footage to her before going to the next country, then we talked about the footage together. Emelie even gave me good advice to improve my shooting and the final edit. This style of work brought us close to each other, so Emelie and I often had the same viewpoint, and she understood the emotion that was in each scene. Emelie was able to capture our emotions in the edit, even when they weren’t clear in the footage. From hundreds of hours of video, she wrote the story so that it both reflects the reality of our lives and also brought out the beauty in the film.

Filmmaker: You and your wife Fatima are both artists and filmmakers. While you are in the director’s seat here, did the two of you have different opinions on what Midnight Traveler should and shouldn’t be?

Fazili: That fact that my wife Fatima is a filmmaker helped me in this film because she understood the value of my work. Nonetheless sometimes there were small differences of opinion between us. Fatima is a realist, and I am often emotional and imaginative. I would take risks in order to shoot in every situation, and Fatima was sometimes worried that the filming could create problems for us. Generally though, Fatima and I were in agreement, and even when we disagreed I tried to both listen to her and explain my viewpoint clearly. Sometimes, when I was following my own ideas, Fatima respected and agreed with the directing work I was doing.

Filmmaker: Through all the perils you have braved, the film manages to consistently keep a tight focus on the intimacy between all the members of your family. Why was that a priority for you?

Fazili: Prior to our movie, there were many other films made about problems with migration, so we decided that the migration part of our story would be a marginal part of the movie. We wanted the audience to be closer to our happiness, unhappiness, dreams and feelings. We wanted the viewer to feel that they are by our side during the film, to laugh and cry with us, to feel homeless and confused with us so they would not just watch us from a distance.

I saw other people who do not trust each other, who fear each other, who are not kind to each other, but inside their family they are good to each other and they trust only their own family. Our family was always close to each other, and we were helping each other to fight our problems. Whenever I was disappointed with the severity of our problems, just seeing the sweet acts of my daughters gave me hope again. My daughters’ world was full of honesty and love and closeness, and I always felt that the best moments of my life are the ones with them, to the extent that I sometimes wished I could just stop time. On this trip, all our power was being with each other, and for this reason, the most important part of the movie is the family.

Filmmaker: There are countless candid moments in the film that give us insights into every member of your family. The one that probably hit me the hardest is when one of your daughters started crying out of boredom. Another scene I keep thinking about is your daughter’s dance to Michael Jackson — the song choice (“They Don’t Care About Us”) seemed especially fitting.

Fazili: Nargis has the character of a seeker, she is careful about everything, and she is kind and strong. She has an introverted personality and tries to hide her problems from me and her mother because she does not want to upset us, but then sometimes she does get tired and cries. Most of the time, when Nargis is upset, she tries to dance her sorrows away. I already knew Michael Jackson’s songs. Although my English is not good, I had read the song lyrics to “They Don’t Really Care About Us” in Persian, and whenever I heard this song, I felt like it was inviting me to fight against injustice.

In order to pump myself up, I myself would listen to this song turned up loud and pace the room. After a while, I realized that Nargis was also listening to me and likes the song. Nargis and I understand very little of the meaning of his lyrics, but both of us love the rhythm of the song and we dance. I think Nargis is trying to drown out her sadness in that scene. For me, that dance scene with Michael Jackson’s song is like a giant scream emanating from the bottom of my heart that I am screaming from the top of a tall mountain.

Filmmaker: It sounds like you and Fatima are raising your children with artistic values and aspirations. In the film, your (I think, older) daughter even voices her interest in becoming a filmmaker. Would you like for her to follow through on that?

Fazili: I want my daughters to decide on their own future, and I do not want to force them to do anything. When they grow up, if they want to be filmmakers, I would be happy and I would support them. But I would respect them and support them if they choose another job. I just want them not to be indifferent towards others, and to try to make their own lives and other people’s lives more beautiful.

Filmmaker: The film ends with some positive news, but still on an uncertain note. What is your family’s current situation? Are you still appealing to live in Germany?

Fazili: We have been in Germany for about t10 months. Initially, the German government told us that because of the Dublin Convention, we have to return to Hungary. But we were imprisoned in Hungary for three months and the police there didn’t treat us like people. We depicted the poor status of the refugees in the Hungarian prison in the film, and that is why we are scared of going back to Hungary. We got a lawyer here in Germany, but unfortunately the lawyer took our money and did nothing for our case. So we had to get a new lawyer, and in January 2019 all our asylum proceedings re-started from the beginning.

It is still unclear how our case will turn out. Perhaps the German government may deport us to Hungary, maybe we will be accepted to stay, and maybe we will be stuck here for many years in this uncertain situation. We are all healthy in Germany and we are happy to go to school, but we are all upset and worried about being in an uncertain position.