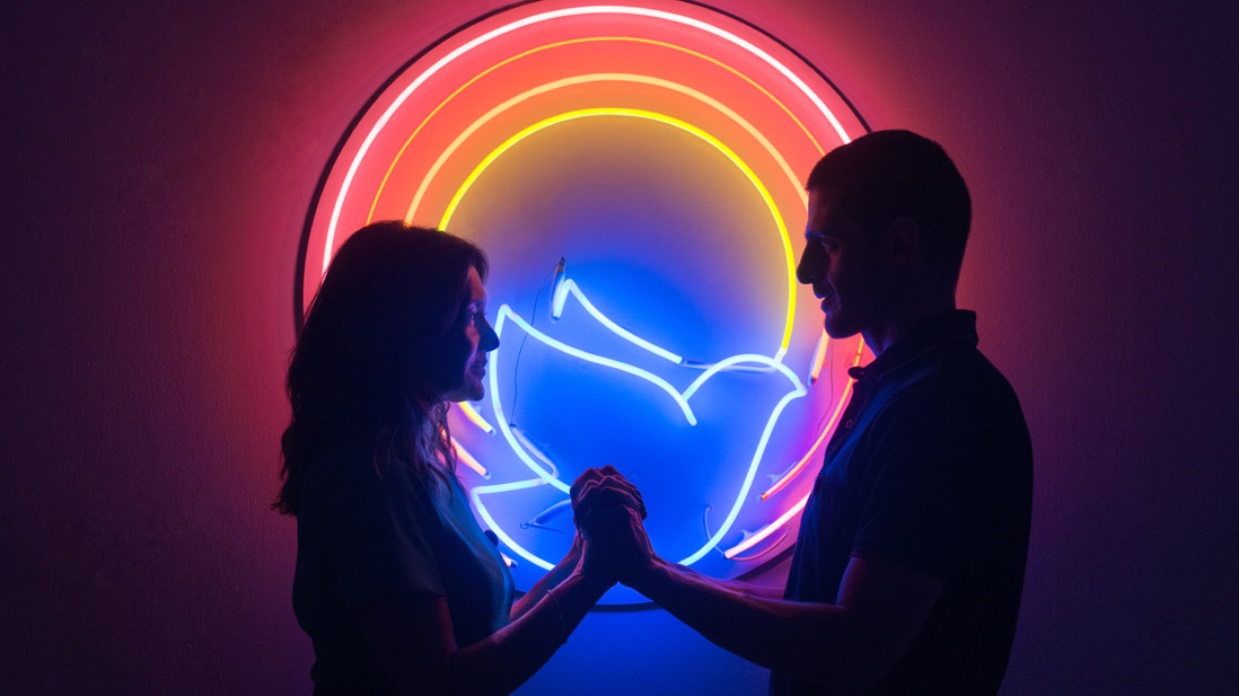 Futuristically restrained, the director’s vision of Brazil in 2027, just a few years from our current battlefield of a world, is selective in its use of technology, focusing on inventions or machines that directly speak to the protagonist agenda: doors with pregnancy detectors in public spaces and a device emanating infrared light to combat infertility in men. Navigating this increasingly traditionalist reality, married couple Joanna (a stunning Dira Paes) and Danilo (Julio Machado), are devout evangelicals longing to fulfill their Christian duty of procreation.

Driven by a conviction so strong doubt is sacrilegious, she exploits her position as a bureaucrat to advance her agenda and prevent divorces before they are processed. Those souls Joanna thinks she is saving soon become part of her radical congregation, Divine Love, where sexual practices with multiple partners are not off limits if it means ensuring impregnation. Her irrational determination is tested when the ultimate miracle strikes unannounced.

Thrilled about the widespread acclaimed Divine Love has quickly garnered, Mascaro met with Filmmaker in Park City to deconstruct the ideas about body politics, pop culture-friendly churches, and the rise of conservative ideologies in his homeland and abroad.

Filmmaker: It’s likely that people are interpreting Divine Love in relation to the recent election of Bolsonaro in Brazil, but you obviously had been working on it prior to this. Did you somehow foresee what was coming while writing this film?

Gabriel Mascaro: I’m very impressed with the growth of the church’s political power and the conservative agenda in Brazil. For me it was very clear that sooner or later a great and symbolic change in politics and culture was going to happen. Curiously, this Neo-Pentecostal religion is very strong across Latin America and is being exported to Africa and other continents. It’s a giant force that’s getting more powerful within people’s lives and now in politics. This is a religion that grew strongly among lower-income communities or the lower class, which means that it’s a religion that grew silently. Artists and intellectuals didn’t really perceive its growth. There is not a lot of research or artistic productions dealing with these themes. For me it wasn’t as surprising, because I’m from the lower middle class and I interact with a culture that made it clear something strange was going to happen with Brazil.

Filmmaker: Why is a religious bureaucrat the ideal protagonist for this story?

She wants things to be even more conservative and wants the church to have more power over the state. This is a film about the body and the state. I wanted to think about a new regime of pleasure and violence in the body, which in its very own way connects eroticism to power.

Since this is a film about the body and the state, I needed a character that is immersed in bureaucracy. During my research I realized that bureaucracy has very close parallels with religion. The foundation of bureaucracy and religion is equality. We are all equal in front of God and the state. That’s why I tried to reflect, but bureaucracy is always difficult to film in interesting way. Here I was making a movie about religion bureaucracy, two very difficult things to depict.

Filmmaker: You also have a male character that is trying all avenues to fulfill his religious duty to procreate. How does he fit within your narrative?

Macaro: Today, the feminist movements is still outspoken about the way the female body is seen. This is a film that creates a story around the female body, but it was also very important for me to think about the political change in cinema regarding how we look at the male body. There are countless movies that show ultrasounds of a woman’s pregnant belly, but I’d never seen a movie that showed an ultrasound of a man’s testicles. What I tried to create is a new way of looking at the male body in cinema. We talk a lot about the representation of the female body on screen, but at the same we need to create a new way of looking at the male body. We need to have a discussion about the two bodies simultaneously.

Filmmaker: The way we relate to our bodies seems directly affected by what is expected of us in traditional society.

Mascaro: Yes. For example, in the bible all mentions about infertility relate to women. It’s presented as if infertility is a woman’s fault. In my film it’s not her fault, it’s her husband who is dealing with infertility. Once everything unfolds in the film, she shows no regret. She feels no guilt. She is a woman confronting the philosophical and universal topic of the messiah’s return, which is the foundation of the Christian religion. Christianity promises it followers the messiah will come back one day, so the only real sin is to claim to know how He will return. If I say I’m the messiah that’s an unforgivable sin. This image of tremendous contradiction is the basis for the Christian religion. The announcement that he will return is connected to the unforgivable act of someone blaspheming by claiming to be the new messiah. This thesis has the possibility and the impossibility of his return as its foundation. It’s a very interesting contradiction.

Filmmaker: The world the characters inhabit is in the near future, in 2027 to be specific. Why less than a decade ahead and not a more drastic jump forward in time?

Mascaro: It was to create a time displacement with a few elements that culturally change the perception of the body and the biopolitical control over it in this world. It’s not a sci-fi film trying to create a visual allegory based on a fetish. It’s about the having strategies for the symbolic reappropriation of the genre that uses time displacement with a lot of care. We use a short time displacement to talk about the future, but in reality we are making predictions about the present. The film shows great ambivalence because as we are looking forward to the announced future, we are constantly updating our present as a counterpoint. Divine Love is more a reflection on the present.

Filmmaker: Thinking about this near future, what was the intention behind the visual elements that show us the world has changed even if just slightly.

Mascaro: The technological changes between our present and the movie are very small, maybe today there is technology like the one used in the detectors. I thought of small ways to represent the state’s control over the body in everyday life, which makes a profound comment about the world we are living. This isn’t only happening in Brazil, but the conservative, populist, and nationalistic agenda is spreading throughout the world. Divine Love warns about this international ideological movement.

Filmmaker: There are explicit sex scenes in the movie, but they are always in the context of a religious group. Do you think this encounters go against their beliefs or support them?

Mascaro: Above all, this movie is about faith and this character wants more religion in her life. To that end, she donates her body to an even more radical, faith-based project. It was natural for us to think, within this context, about sex that’s very violent and solely for procreation. This group, Divino Amor, is very contemporary and appropriates elements that can help it push forward its mission to protect the Christian family. For example, swinging, which is a sexual practice we associate with liberal culture, is in reality an extremely conservative practice because it saves marriages and keeps the family together.  Conservatives symbolically appropriate things we think of as being liberal, but use them to radicalize their vision. For a moment we may think, “How cool to see liberal evangelicals,” but that’s not the case. These are ultraconservative evangelicals using progressively minded ideas to advance their agenda.

Filmmaker: Tell me about the shiny religious drive-thru where a pastor delivers hopeful messages to believers in a rush and the Christian EDM concert we see the protagonist be a part of.

Placing a scene in this drive-thru can initially sound like a joke, but the length of this moment and how it unfolds is enough to feel respect for the ordeal. The pastor does a fine job. He takes his time and the emotion he transmits is rather sincere. It’s a special moment for the client almost like therapy of ecstasy. The film takes on the risks of working with something that could be humorous, but because of the cinematic perspective and how much time I allocate for the scene we try to discover the impact that such encounter has on person.

What they create is a seductive world. It would have been easy to portray a universe like the one in The Handmaid’s Tale, which is a more stereotypical vision of a dark world that rejects all elements of pop culture. Instead, what we are seeing now is even more dangerous because it sips into cinema, television, and artistic expression. This evangelical culture is not proposing a totalitarian state, on the contrary.

I went to a Gospel rave and they are incredibly enticing. Imagine being young and starting your social life at age 14 or so, and having a massive party to dance with your friends for an entire Sunday, that’s seductive. We need to look at this phenomenon not with simple rejection, but to try to comprehend it all its complexity.

Filmmaker: Visually, Divine Love stands out for its bright fluorescent lighting and intense hues. How did you and your cinematographer come to the decision to go in that aesthetic route?

Mascaro: Diego García and I have a relationship since Neon Bull, and there is great symbiosis between us. In between making movies together we stay in touch. I sometimes send him photos and say, “Look how interesting this image is.” It’s a constant exchange that could be useful for a future movie or for nothing. We are very close. He provided input towards the idea of creating very specific colors for a culture in transformation. We didn’t want to create a boring or cartoonish religion. The color palette almost makes the film look as if painted with watercolors. For me this is a watercolor movie.

Filmmaker: Another fascinating aspect of the film is the enticing music we hear throughout, in particular the songs. Can you explain your intent with this elements?

Mascaro: Gospel culture in Brazil has no room for sacred art, but their music is their identity. There are no religious images, but music is very important and symbolic for them. It’s very common that a person who is riding the bus would star singing these religious songs so that everyone can hear them. They are very proud of their music and they sing it out loud. Having their music be ubiquitously present is a form of intangible violence. Their music and culture enters people’s minds forcefully through their songs. All of the music in the film is original. I and other collaborators composed the lyrics. We tried to create a seductive soundscape in line with the Gospel identity. We composed a two-minute song as well to have a musical piece to play during the drive-thru scene without any cuts to create a powerful experience.

Filmmaker: Would it be dangerous to make a movie like Divine Love in Brazil today?

Mascaro: I think so. We are lucky because we have already premiered it. Maybe today we wouldn’t be able to do this. I’m eager to know what’s going to happen with this movie in Brazil in terms of distribution. This is the first Brazilian movie to premiere internationally post-election. It’s all very new.

This interview was conducted in Spanish and translated to English by the author for Filmmaker.