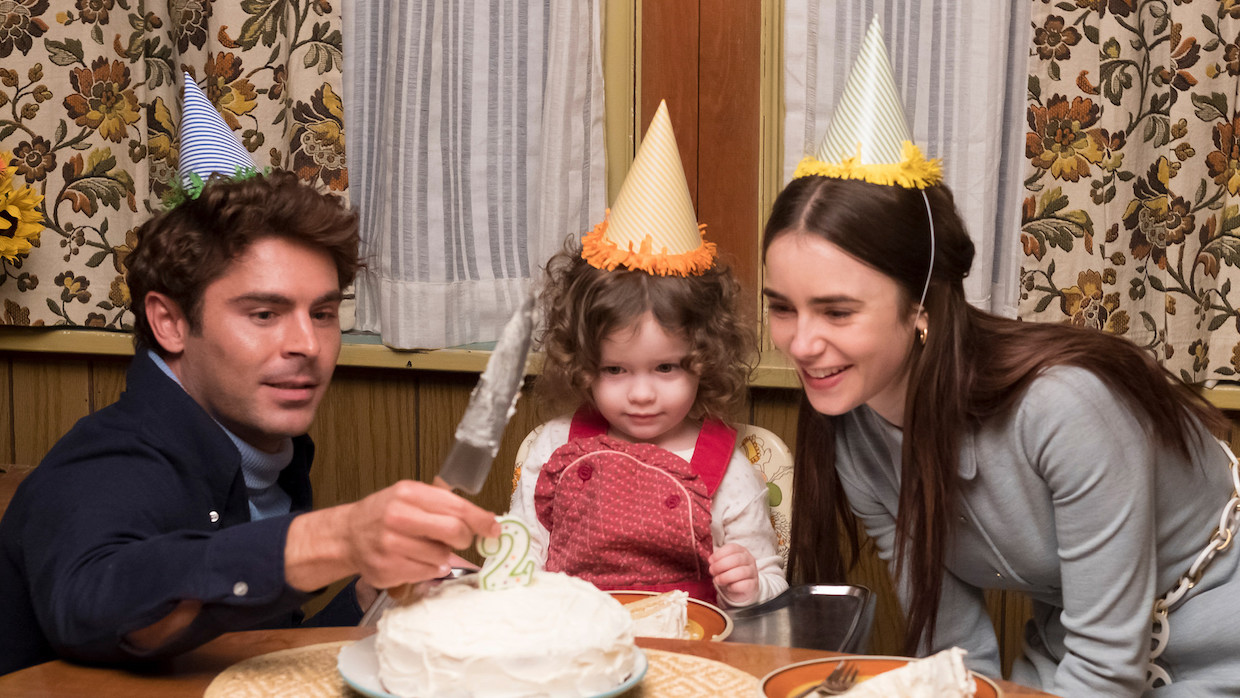 by Filmmaker Staff
in Editors, Interviews, Sundance
on Feb 2, 2019

Veteran documentarian Joe Berlinger has two films on serial killer Ted Bundy this year. One is a documentary that’s now on Netflix, Conversations With a Killer: The Ted Bundy Tapes. The other is a narrative take on the same story, Extremely Wicked, Shockingly Evil and Vile, with Zac Efron playing against type as Bundy and Lily Collins as his unaware girlfriend Liz. Via email, editor Josh Schaeffer spoke to his work on half of Berlinger’s year of Bundy.

Schaeffer: Initially I did a phone interview with the director (Joe Berlinger) and the producers while they were in Kentucky, a week out from shooting. My previous work on Molly’s Game kind of put me in the conversation.   Joe’s background in documentary film and true crime informed the way he wanted to tell this story. From the beginning Joe had a very clear idea of how he wanted to integrate archival footage and audio reporting throughout the film. The goal was to help ground the film in the ’70s and to remind the audience that these extreme events actually happened. I was excited by the experimental nature of the things he wanted to try.

Schaeffer: Most people coming to see the movie know that Zac Efron is playing Ted Bundy, and even the younger audience members have some idea that Ted was a serial killer. This created a unique challenge, as we had to get people to understand how Liz could stand by him for so long.

The real Ted Bundy captivated people. His trial in Florida was the first televised national trial. It attracted groupies and, by serving as his own council, it gave him a platform to be charismatic. At the same time he was a sadist, a real-life monster. The challenge was to have Zac seduce the audience the way Ted did, while at the same time avoid glorifying him or letting him off the hook.

Ultimately the film is Liz’s story. We are meant to see Ted the way she saw him, which is why we don’t recreate the actual murders in the movie but rather we learn the horrific details the way she did; thru his arrest and his trials.

Schaeffer: Figuring out how much of the factual details to include while at the same time trying to keep the movie emotional and visual took some time. People are obsessed with the details of this case, but at a certain point, watching Zac and Lily become these characters and seeing them together created this dark tension all on its own. You want the audience to question whether Ted would kill her, and in a lot of ways you had to figure out how to stay out of the way and let the characters chemistry drive the tension.

Showing early cuts of the movie to people Joe and the producers trusted was essential. Getting feedback from an audience on when the exposition became confusing or overly complicated helped us to make it more emotional and more entertaining. We showed Zac halfway thru the post process and he gave us some of our best notes. Often you think an actor would want to protect their monologues and screen time, but he really pushed us to pull his characters dialogue back, to never needlessly let Ted defend himself. Watching him listen, watching him let others defend him ultimately made him more powerful.

Schaeffer: I started in commercial editing as a receptionist at Lost Planet and made the leap to assisting as Hank Corwin’s full time commercial assistant for several years. I look back at that time as a master class on how to be an editor and an artist. Through filmed footage, found footage, still images, music and sound, I saw how an editor can invent, experiment, and take risks.

While with Hank I began to find my own projects to edit on the side.  I cut my first feature, Brotherhood, with friends I had met at NYU. That film went on to win the Audience Award at SXSW. Working on short films, web series, and music videos, I met filmmaker Jordan Vogt-Roberts. This relationship was particularly fruitful because at a time when I was looking to cut stylized cool stuff, he was making weird films with RED and Phantom cameras, improvised ideas and ambitious special effects. I cut his short, Successful Alcoholics, which premiered at Sundance, and I continued to work with him on other projects including Mash Up, Kings of Summer and Kong: Skull Island. This led to television work, and over time I’ve expanded into larger films like Pacific Rim 2 and Molly’s Game.

Schaeffer: We edited the movie on Avid Media Composer 8. The ability for the post production team to work together, in the same project through ISIS, was essential. During the director’s cut in NYC we were further assisted by his documentary team, and it helped for them to see things in progress so they could recommend archival footage.

Schaeffer: The biggest challenge in the film wasn’t a particular scene, but rather balancing the setup in the first half of the film with the excitement of the Miami trial as it drives us to the end.

Even early on we found the second half very captivating. The archival elements were working the way we had hoped and the performances from everyone were both powerful and engaging. The style of the second half ultimately informed how we approached revising the first half. A lot of things have to happen in the first half to set up Miami—Ted and Liz meet, Ted gets arrested in Utah, he is transferred to Colorado, he escapes from prison twice. We wanted the movie to be more then the factual events.

First, we pared down the first two trials so you wouldn’t be worn out by the time we got to Miami. There isn’t a lot of archival footage covering the early trials, before he became a national story. The archival in the second half had created a pace and a rhythm we couldn’t duplicate in the first half, and initially this made the first half more conventional and linear. We decided to experiment with intercutting scenes to reveal information in a more interesting way. One example of how the edit evolved is that instead of playing Ted’s first arrest linearly, as it was written, we held off on letting the audience in on the reason for his arrest until after Liz confronts him when he returns home. Thinking like this unlocked a very productive period where Joe and I would come up with new and more interesting ways to frame the movie around Liz’s point of view.

Schaeffer: The ability to control the rhythm of a movie through VFX tools has become a craft unto itself. Utilizing variable speed effects, split-screening different takes and augmenting timing thru fluid morphs is really elevating what can be done in post production. Even on a small film like this you end up with 200 effects shots, but it has become simpler and more affordable.

Schaeffer: The meaning of this movie continues to evolve for me because it asks questions that don’t have clear answers. Why doesn’t Ted kill Liz? Did he really love her? Joe’s career covering true crime gave him such a unique perspective to handle the depth of a person like Ted Bundy.  Zac’s ability to seduce the audience tricks you into sympathizing with Ted, while at the same time you’re always kind of aware that Ted was a serial killer. A sense of guilt for taking his side emerges. This creates an unsettling balance that leaves you thinking about the movie after it’s over and about how much you really know the people around you.