How Do Producers Get Started? Full Frame’s 9th Annual A&E IndieFilms Speakeasy, “The Pathway to Producing” 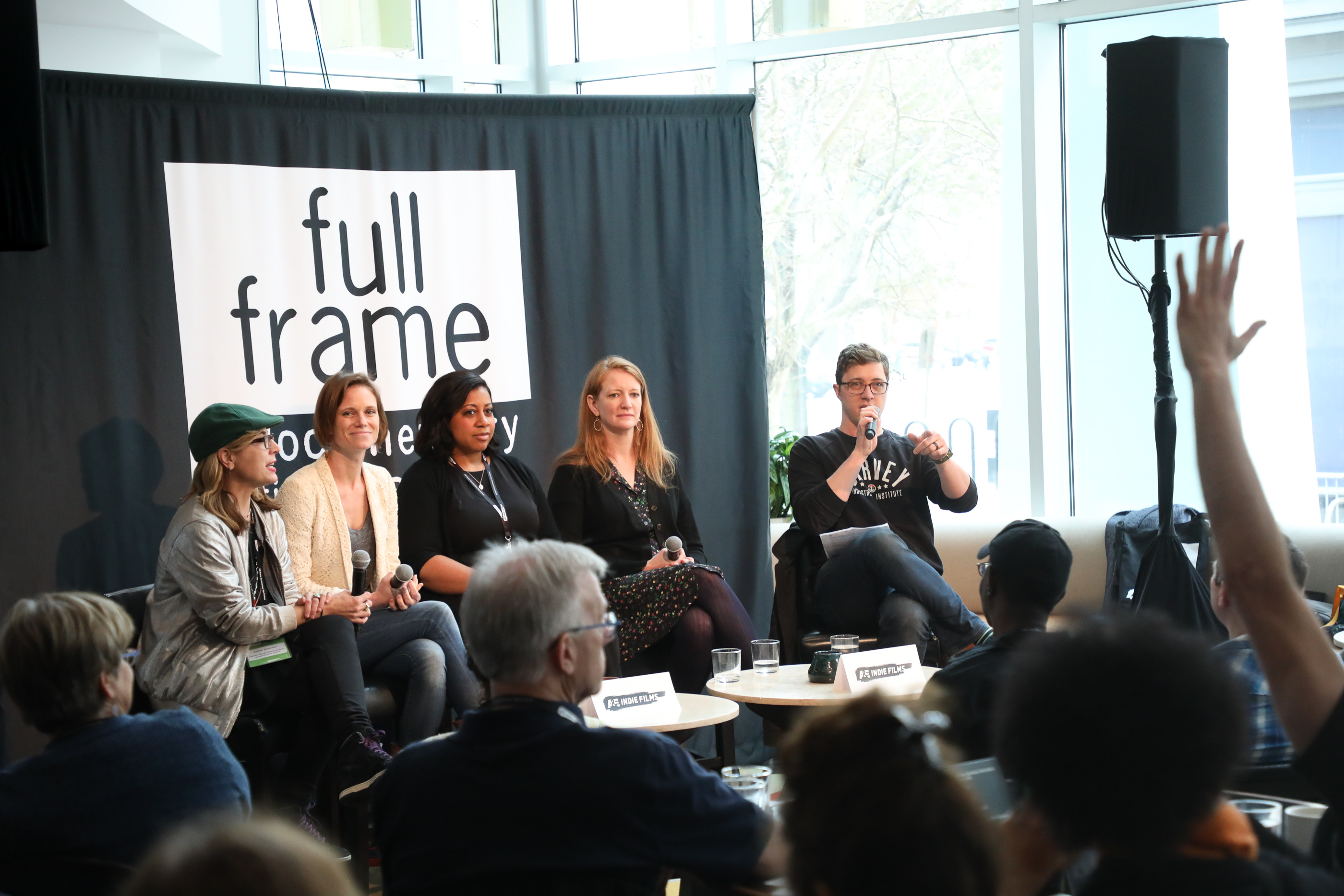 Filing into the lobby of the comfortably chic Durham Hotel at noon on a Saturday for “The Pathway to Producing,” an A&E IndieFilms Speakeasy panel moderated by Ian Kibbe (Raising Bertie) of the Documentary Producers Association, it struck me that the Full Frame Documentary Film Festival is one of those rare fests, nonfiction or not, with genuine audience diversity. While one would expect people of color to show up for the always packed #DocsSoWhite discussions (of which there were two this year), non-white folks also fill the house for the conversations that have nothing to do with race or gender or any identity at all — save for one. That of filmmaker. And that’s some form of progress (of which Full Frame should be proud).

As for “The Pathway to Producing” participants, the all-female — less surprising, since women tend to fill the role of producer more often than director — lineup included Jessica Hargrave (Ask Dr. Ruth), Carolyn Hepburn (One Child Nation), Jameka Autry (Ernie & Joe), and Esther Robinson (Memories of A Penitent Heart). (Though I’d be remiss if I didn’t point out that One Child Nation, Ernie & Joe and Memories of A Penitent Heart all have women at the helm. And also that Dr. Ruth, feminist pop culture icon and titular star of the Ryan White doc, was somewhere out and about, making the rounds at the fest.)

Starting with Hargrave, whose resume also includes producing the Netflix hit The Keepers, Kibbe asked everyone to explain how exactly they got into producing in the first place. Like many producers, Hargrave admitted she just pretty much fell into it by simply helping out a friend who was a filmmaker. It was never her original plan — and indeed, she kept her day job throughout her first few films. Autry, a native of Durham, said that she studied at the Center for Documentary Studies at Duke before taking off for New York City in 2012 — where she didn’t know anybody. As difficult as that may have been, though, the experience forced her to forge her own path.

And the first big step on that path led to Ricki Stern and Annie Sundberg, who were seeking interns and editors for Breakthru Films. Autry joined them in order to learn the ropes, starting out in post and never really thinking she’d end up producing.

Robinson added that producing is actually very much an apprenticeship system — not necessarily something you have to go to school for. She mentioned that she only signs onto projects when she has a passion for the story, and noted that the system itself is quite opaque, closed and overwhelmingly white. Because of this, she expressed an obligation to help newcomers navigate the necessary networking.

“So what did you do on this project?” Kibbe cited as one of the most frequently asked questions producers get. He brought up Taylor Hess’s informative article in these pages, noting that producers are project managers, creative partners, advocates — even therapists. Hepburn spoke of doing PA work as an intern for Charles Hobson before becoming an associate producer. She then transitioned to short-form content (commercials, etc.), ultimately joining Motto Pictures as it was being launched because she was already good friends with founder Julie Goldman. By then she’d become skilled enough in the logistics of production and understood the infrastructure well enough to serve as a line producer there.

What Hepburn learned from Goldman and her partner Chris Clements was how to creatively produce — something quite different from the management arena she’d been steeped in. “What is this film? What is the resonance of this film?” she said were now the questions at the forefront of her mind, calling her mentors “transformative producers.” They were always focused on the big picture, she explained, far beyond the actual production. She then quoted a fellow filmmaker who likened the producer’s job to “driving a train while you’re putting the tracks down.” While executive producing might entail fundraising and managing relationships with distributors, she particularly enjoyed having the larger creative conversations, from the making of the film to the film’s messaging to audiences.

Kibbe then urged the audience to check out the Documentary Producers Association’s “crediting guidelines,” which break down the specifics of the producer’s role, before pivoting to the issue of sustainability — both financially and emotionally. Autry noted that when she moved to NYC she was working in digital advertising during the day and with Breakthru at night — usually until two in the morning. She just started working on any projects that needed to be done, taking the initiative herself, which led her to basically stumble into producing. “I literally didn’t know what I was doing,” she emphasized. “But they [Stern and Sundberg] gave me the confidence and the strength.” In other words, they believed in her, which rubbed off. “What needs to be done, and how can I move this forward?” Kibbe added, summing up Autry’s process.

Robinson then addressed the wholistic question of sustainability: “What am I here for, and what can I afford to do?” She added that “balance is a verb” (and that her husband once told her that her life is a suitcase that she has to sit on to shut). She also explained that she has social justice goals that she wants to achieve, and that in itself makes her happy. As do her “deep, loving and trusting friendships.” Her “investments in people make it all worth it.”

Kibbe wondered how producers can actually earn hard cash, though. After all, they don’t have the specific concrete skills that editors and sound designers possess, which makes it all the harder to freelance. Hargrave countered that producing encompasses so many things that she found that her day job actually ended up contributing skills to her producing work. (Kibbe, on the other hand, said he was once a jellybean mascot.) Autry, for her part, spoke of pulling double or triple shifts — the art of juggling several projects at a time. It was the only way she’d found to make money.

Hepburn then pointed out that the producer is the last to get paid — so working multiple jobs at a time is par for the course. She admitted that being married to someone whose health insurance plan she can join alleviates a lot of the stress. She also knows many folks who teach to get by, and she herself has waitressed. Robinson agreed that almost everyone in the independent film world has multiple income streams, and that one must be skilled in keeping several projects in play simultaneously. She reflected on a number of articles she’d penned for Filmmaker in the past and concluded by addressing indie film’s dirty little secret, “If they don’t seem to have other forms of income coming in then they are [independently] rich.” (A statement that elicited a loud round of applause.) Indeed, it seemed to Robinson that only those who didn’t have the pressure of needing a paycheck are the ones racking up project after project. It will always be a slower process for the non-wealthy — slower but deeper, she added.

Hargrave mentioned that she had known Ryan White for quite a long time, so she works well with him. But their bond was also the result of having a similar work ethic, which in turn led to a deep trust. Kibbe then turned to the important topic of structural inequality and how to go about “decolonizing documentary filmmaking.” (The blond-haired and light-skinned Kibbe, with roots in both North Carolina and Texas, is actually part Jamaican/Cuban.) How can they as producers “dismantle these systems and build other systems?”

Robinson returned to the pieces she wrote in these pages, specifically addressing institutional bias. “Hire people and promote them,” she urged. It was that simple. Also “change your way of communicating,” she stressed. She spoke of bringing onboard two women who she trained up to the associate producer role (a level she regards as a minimum). She also emphasized supporting them on their terms.

Hepburn wholeheartedly agreed, noting that you also have to challenge your own thinking. Before choosing projects it’s important for her to determine whether the director will be collaborative as sometimes they may be too narrow in their POV. She’s also a big fan of feedback screenings, which allow the filmmaking team to “hear what we may be missing.” She goes out of her way to get as many different viewpoints as possible.

“With great ability comes great accountability,” Kibbe then acknowledged. He asked specifically about “window dressing calls” — how do producers deal with that? Since Autry, along with most POC filmmakers, constantly receives these requests, she jumped in by firmly stating, “Do not be a face to put on grant applications.” To be the diverse “window dressing” on someone’s project is incredibly insulting. Luckily, over time she has learned how to quickly identify those dubious media makers. (However, if she’s unsure she will come onboard for a trial period of 60 to 90 days.)

Robinson noted that producing itself is a “business of attrition.” In other words, “filmmakers self-identify” and then the industry sits back and waits to see who has the stamina to last. The average first film takes seven years so duration is key. “No one is going to save you,” she added, specifically addressing any director seeking the perfect producer to make their filmmaking dream a reality. “You have to do the majority of work for yourself.” Directors can’t just find producers. (“Unless it’s your best friend from childhood,” she clarified with a hint of exasperation, before adding, “I’m not kidding.”) “You don’t get to skip learning,” she concluded.

When Kibbe broached the subject of the “discovery of documentary by the extractive market,” Robinson admitted that she was greatly troubled by it. Hepburn again emphasized the importance of networking — something that was quite unnatural for her. She described it as a “learned skill.” She also said that she’s often pitched projects that are not right for her, but that she usually has someone in her network she can connect the filmmaker with instead.

Autry noted that producers must learn to hit up private funders, wealthy individuals, and corporations in addition to non-profit granting organizations. She then emphasized that when a director approaches a producer they must have something for that producer to see in order to “elevate the conversation.” Which prompted Robinson to add that the producer’s own body of work is itself important — so directors should not only be aware of it, but also able to make the case as to why they might make for a good fit.

In closing, the entire panel agreed on one (particularly disheartening) thing — that producers almost never get paid for their passion projects. (Though Kibbe stressed that they should write themselves into the budget regardless, lamenting the fact that too often producers find it difficult to advocate for themselves.) Robinson then summed up these free creative labors as “the lover that fails you.” Left unsaid was what every indie filmmaker knows — that the lover that disappoints can also bring unimaginable joy.