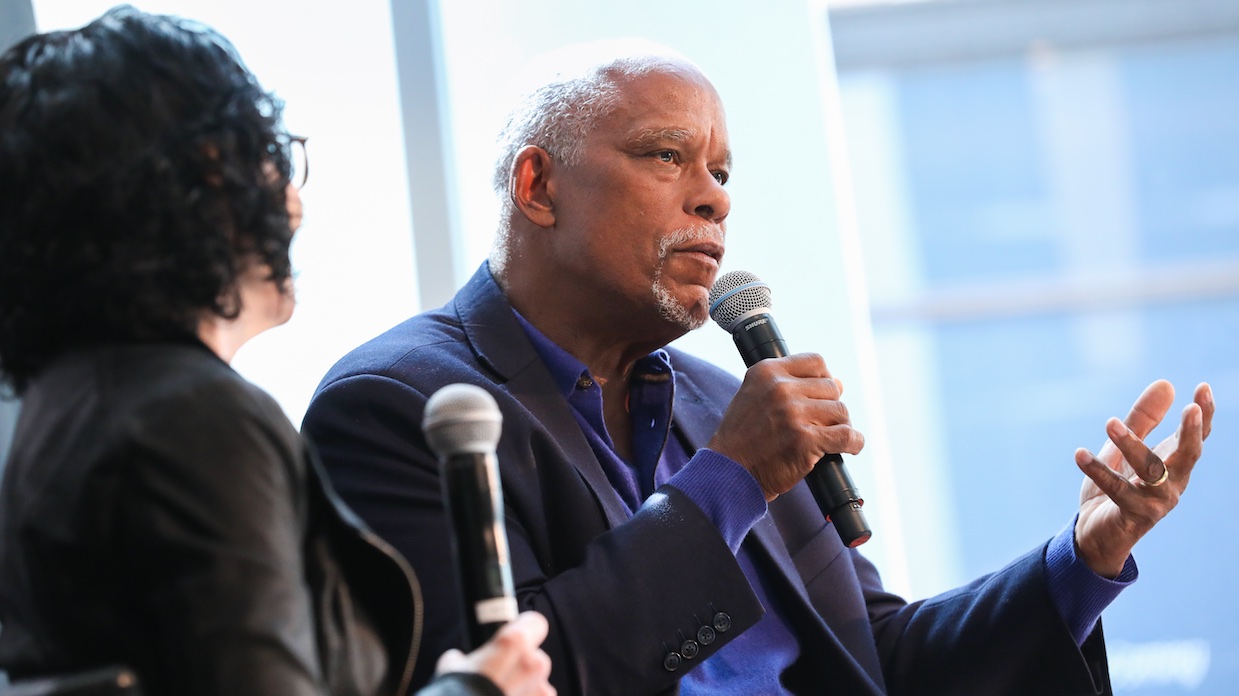 Taking place on a Saturday afternoon in the lobby of The Durham Hotel, “Framing the Conversation: Stanley Nelson” was the final panel discussion in a series of A&E IndieFilms Speakeasy chats at this year’s Full Frame Documentary Film Festival. (Though the festival itself is an arm of the Center for Documentary Studies at the prestigious Duke University, these always informative, free-to-the-public, laidback talks have been the 22-year-old Full Frame’s secret weapon for close to a decade.) In town to interview Nelson, the down-to-earth founder of Firelight Media, a recipient of both the MacArthur “Genius Grant” and a National Humanities Medal from President Obama, and a filmmaker whose over three-decade career now includes his latest for PBS’s “American Masters” series Miles Davis: Birth of the Cool, was Nancy Buirski, herself an award-winning filmmaker (The Loving Story, The Rape of Recy Taylor) and the founder of Full Frame.

Buirski began by noting that Miles Davis: Birth of the Cool seemed to mark a departure from the rest of Nelson’s oeuvre as it doesn’t deal explicitly with social justice and the African-American experience. Which also prompted her to wonder, “Are you an activist filmmaker?” Nelson shook his head, responding that he’s a filmmaker first, an activist second. Then he added that he’s never really thought of himself as an activist (just a filmmaker “interested in certain things”). “If I were I’d have done a lot better job,” he laughed. He reminded Buirski that the filmmaking process is often long and difficult, which is why he only takes on projects that are important to him. Two Dollars and A Dream, his first doc, took seven years to make. The second, The Black Press: Soldiers Without Swords, another seven years. Those two films accounted for a huge chunk of his life, spanning a decade, so the subject has to matter to him, plain and simple.

Buirski then referred to Miles Davis: Birth of the Cool as an “evolutionary step” in his process. Nelson agreed that he had more latitude with his subject being an artist as it allowed him to put more artistry into the film. But then he emphasized that “the film isn’t about me.” He really just wanted to get out of the way and let the audience “hear the music play.” To which Buirski responded that he hadn’t made any portraits of artists up till now. Nelson stressed that he just doesn’t want to make the same film over and over again, and as a jazz lover he long wanted to explore Davis and his work. Davis proved a rich and “perfect” subject because the jazz legend had so many different sides to tackle. Buirski then wondered whether it was hard to make a film about a musician — to visualize the sound of music. Surprisingly, the director answered that “the chance to create takes the pressure of the world off of you.” Miles Davis was certainly cantankerous, but he used his art as a relief valve. With a laugh Nelson added that a lot of people probably think that about him, too.

One of the running themes of the doc, Buirski pointed out, was that “you always have to have something different to say in order to create a masterpiece.” Stasis never cut it for Davis. Did Nelson also feel that way? He agreed that he always wants to get better, and briefly reflected on his father, who was a dentist “with the soul of a jazz musician.” He was an “inventive dentist,” Nelson explained, who quit practicing in his fifties simply because he was done. There was nothing left to achieve. On the other hand, Nelson himself was still learning (and enjoys film festivals since they allow him “to steal ideas from other artists,” he said with a smile). He noted that we’re in an interesting time, the “golden age of documentary filmmaking,” yet it’s only a “golden age” for “some people.” He then spoke about artists not getting in the door of Netflix, not getting to realize their second film. He makes it a point to mentor younger filmmakers (having worked with the teams behind both Whose Streets? and this year’s Always in Season, which had screened Full Frame just the night before).

“But who should tell these stories?” Buirski then wanted to know. (A question that as a white woman who’d directed a doc about a black woman who’d refused to remain silent after being gang-raped by a group of white men in the Jim Crow South she was nervous about asking.) Nelson noted that, though he was happy that cheaper equipment allowed for “more room to play around with ideas,” cable providers don’t have any impetus to make black films. Currently, he’s working on a four-hour series on the Atlantic slave trade for public television == something he would never pitch to a Hulu or Netflix.

Which made Buirski ponder, “Who are we making these films for? Are we ‘preaching to the saved’?” Nelson responded by bringing up The Story of Access (“access” being what was fought for during the civil rights movement), the eight-minute bias training film he made for Starbucks, which explores how blacks feel in the public space. By just directly asking people of color if they felt comfortable in certain spaces he ended up learning a lot about himself, and specifically about what black people don’t talk about amongst themselves. When one of the people working on the film for the Starbucks team — a white guy — mentioned that he’d never in his life felt uncomfortable in a public space, Nelson was floored. It was a “mic dropping” moment for him, since as an African-American male Nelson found himself uncomfortable on a daily basis. His eyes were also opened when he spoke with folks who had “Starbucks names” — i.e., “if your name is Mohammed you’re going to have Starbucks call out “Bob” when your coffee’s ready to pick up.” Which made Buirski wonder whether more corporations should be doing this type of sensitivity training. This prompted Nelson to say, with a chuckle, that he’s all for corporations doing this kind of work — it’s “very profitable” for him.

Nelson then turned his attention to the importance of elder statesmen helping the next generation, as he himself got his start working with black filmmaking pioneer William Greaves straight out of high school. (Which allowed him to see an African-American documentarian actually make a living making films.) He also acknowledged the great D.A. Pennebaker, who was actually seated in the audience, right alongside student filmmakers and fellow professionals alike. He noted that his Firelight Media Documentary Lab is dedicated to filmmakers of color, and that he’s a firm proponent of POCs (not just black but all non-white races) telling their own stories.

As for the filmmaking process, Nelson spoke of having an “air of objectivity” when it came to his films for PBS (while simultaneously admitting that, of course, “everything is subjective”). As an example, he related an interesting anecdote about The Black Panthers: Vanguard of the Revolution. Though rumors had long been swirling that activist and revolutionary Fred Hampton had been drugged before being assassinated, Nelson decided to forego addressing the issue, as toxicology reports regarding his death had been contradictory. It was important for Nelson to fact check everything. (Though even with meticulous research Breitbart News came after him, he recalled with a sigh, deriding his take on the Panthers as agit-prop.) And when it came to his latest, which took close to a decade and a half to make, the obstacles were numerous. After initially securing buy-in from both “American Masters” and Sony Music, things went downhill when “American Masters” pulled out. Undaunted — even in the face of Ken Burns’s epic miniseries Jazz “killing a lot of jazz films” — he returned to “American Masters” years later when it got new leadership.

Buirski then wanted to discuss how the current climate of public racism was making his job harder, something he’d acknowledged before. Nelson responded that “We are living in dire times. This is not normal.” He urged “white people to talk to their brethren.” (After all, his family didn’t vote for Trump. Yet he knows many white liberals with family members who did.) With that in mind, he was firmly focused on bringing as many diverse voices as he could into the public sphere. Not only through Firelight’s mentoring program (which received 140 applications last year, of which eight filmmakers were accepted) and its Impact Producer Fellowship (focused on training POCs in nonprofit publicity), but also by pursuing all of the streaming services. At the beginning of his career the only option was PBS, and he got his start through programs that don’t even exist anymore. But as of two years ago the “Netflix effect” started, which Nelson saw as an opportunity to push a wide range of viewpoints out into the world. (Though he was also quick to emphasize the need for diversity in hiring regardless of a film’s subject. “Put people of color to work on your films!”) While he personally is thoroughly content and comfortable working on only one documentary at a time, he also felt an obligation to usher younger filmmakers through any doors that Firelight might pry open.

Which is also a new challenge for him, he admitted. But as Buirski brought up about Miles Davis at the beginning of their invigorating conversation, stasis is the enemy of masterpiece.