“Talking About It is One Thing, Making a Movie About It is Something Else”: Abel Ferrara and Nicola Nicolaou Share Old-School NYC Movie Memories 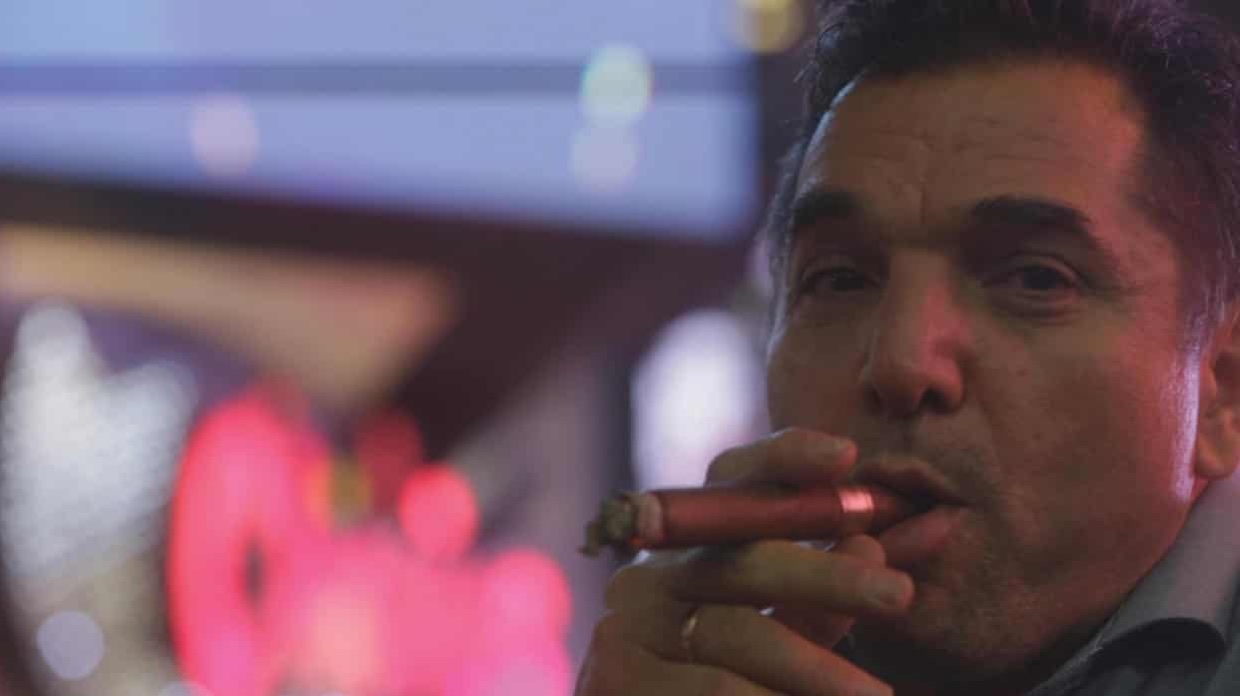 Arriving back in New York, a city with which he is synonymous, Abel Ferrara has been popping up everywhere the past few weeks: from the Tribeca Film Festival, where his documentary The Projectionist had its world premiere, to the Museum of Modern Art, where a near-complete retrospective unspools a half-century of unruly cinema through May 30. The victory lap comes as the Bronx-born expatriate, who now lives contentedly in Rome, ushers a cluster of new work onto screens, including the long-delayed domestic release of Pasolini, starring Willem Dafoe as the radical Italian filmmaker and kindred spirit, as well as the new drama Tommaso in Cannes.

Amid the premieres and the parties, Filmmaker caught up with Ferrara for a brief encounter at the Roxy Tribeca Hotel, joined by Nicola Nicolaou, the title subject of The Projectionist, which tells the story of a humble Cyprus-born immigrant who became a force in New York theatrical exhibition, starting out in the fevered era of Times Square grindhouses and adult cinemas. These days, the gregarious Cypriot’s empire has dwindled to the indie-or-die Cinema Village and a pair of vintage operations: the Cinemart in Forest Hills (“the oldest movie theater in the borough of Queens, built in 1927”) and the Alpine in Bay Ridge (“the oldest movie theater in the five boroughs”). With Ferrara in front of the camera as much as behind it, the film offers up two loquacious field guides who time-travel through the agency of archival footage and their own vivid sagacity to the glory days of 35mm.

What follows is an edited version of an appropriately freewheeling conversation.

Nicolas Nicolaou: New York to me is a city that gave me life. New Yorkers are the best people in the world. I was 15 when I started working in the movie theater, it just blew my mind. I said I’ve got to be in this business somehow. I wanted to open up a theater in the worst way. Even at sixteen I was calculating. So I opened my first theater with $30,000.

Filmmaker: You’re like the embodiment of the American Dream.

Nicolaou: I was in my early twenties, I was looking for all these theaters that were ready to close. It was before real estate got really expensive. [At the D.W. Griffith Theatre] I lived in the projection booth. It was a good address, you know living on E. 59th Street… there with the upper class. I slept on the floor but it was a beautiful location.

Filmmaker: Despite all the massive changes in both the movie business and New York real estate, you managed to hang onto a few classic, old movie houses, something the film celebrates.

Nicolaou: How can you turn the oldest movie theater in New York City into another drugstore or supermarket? How could you do that, as New Yorkers? This town is the town. You destroy the last neighborhood theater that’s been running for 100 years? For what? So everybody goes to the multiplexes? We have to respect our history. It’s like, if you got a theater for 100 years, how many people come to me in their eighties now and say, “My father used to bring me here as a kid.” All these multiplexes are great, but… all the marble and all the fancy stuff cannot duplicate the human experience. And the city’s not helping on a lot of these things. They don’t care. A lot of these things, with real estate tax, the city should care more.

Filmmaker: [To Ferrara] Have you guys known each other a long time?

Ferrara: Two years ago first met… Obviously he’s shown a lot of our movies… We had parallel lives, us making the films and him showing them in all of these theaters.

Filmmaker: How did you meet?

Ferrara: I just heard him talking… we were in a foreign country. We were in Greece of all places. I hear this voice from the past. This is not just a New York accent. It’s a knowledge of… you know. And then he started telling his old-school stories, and it fired my imagination. My memory. People and places. Situations that have been so changed. That was my cinematic life. We’re talking before video. Before the internet. We’re talking about the only time you’re going to see anything is in a movie theater. You got no fucking choice.

Filmmaker: I remember talking with you once and you had a great story about first getting your movies exhibited in New York and what you had to go through.

Ferrara: I told you that story! We had Ms. 45, it was going to be in 45 theaters and Paramount pulled the fucking movie. [Note: This was a different movie, thus creating dozens of open theatrical slots around the New York area that now needed to show Ms. 45]. Three days before. Meanwhile, we’re broke on our ass. We live in downtown Manhattan. We got a loft with one telephone. This is before answering machines… This guy on a bike shows up with a list of theaters we’ve got to deliver 43 prints. This chick was in Lake Ronkonkoma. I don’t even know where the fuck that is to this day. And this is before GPS. 2:30 in the morning we show up at this theater. This old woman, her husband had died. If we didn’t show up with this print there was no film. We pulled up, 2:30 in the morning, and this woman kissed us for an hour. She made us coffee. She gave us cake, right? She was so happy, When we’re about to leave, she says, “Can you help us with the marquee?” And now it’s three o’clock in the morning, pouring rain, and I’m on a fucking ladder, and all I’m thinking putting up [the display marquee letters for] Ms. 45 is “Man, I’m glad this isn’t called The Discreet Charm of the Bourgeoisie.” And from that day on, all our fucking films — The Projectionist, Driller Killer — all I’m thinking about is being on that fucking ladder.

Filmmaker: Your documentaries about New York have this loose, ambling appeal. Like Mulberry Street –

Filmmaker: I rewatched it as an extra on the Arrow Video Blu-Ray elease of Driller Killer. I love that it’s so casual, just a series of conversations. Likewise, The Projectionist, which has the same kind of hangout vibe.

Ferrara: [To Nicolaou] He thought it was too casual.

Nicolaou: I really didn’t know what he was doing. Was he making a movie or just practicing for something? I don’t know.

Filmmaker: What was your motivation?

Filmmaker: Like Mulberry Street, it evokes a time that is fading.

Filmmaker: You’re living in Rome now, so is The Projectionist also a way for you to mark time and comment on how the city has changed?

Ferrara: Yeah, like I said last night at the [premiere], it’s supposed to be parallel stories. His journey through it and ours, and the editor put all of his close-ups in it! [Laughs]. Our story is told, too. Those are our films in there.

Ferrara: They did this to me. They did this to me. 9 Lives [of a Wet Pussy] was this porno film. We shot some cool scenes in that. But when the print traveled around, especially that circuit, you know, once it got south of Philly, the projectionist would just naturally take the best scene out and put it on his reel. We had a beautiful movie and by the time it came out — it was borderline to begin with — now it really sucked. The version now had none of the good scenes. They were all the scenes the projectionist didn’t want. He was the final editor.