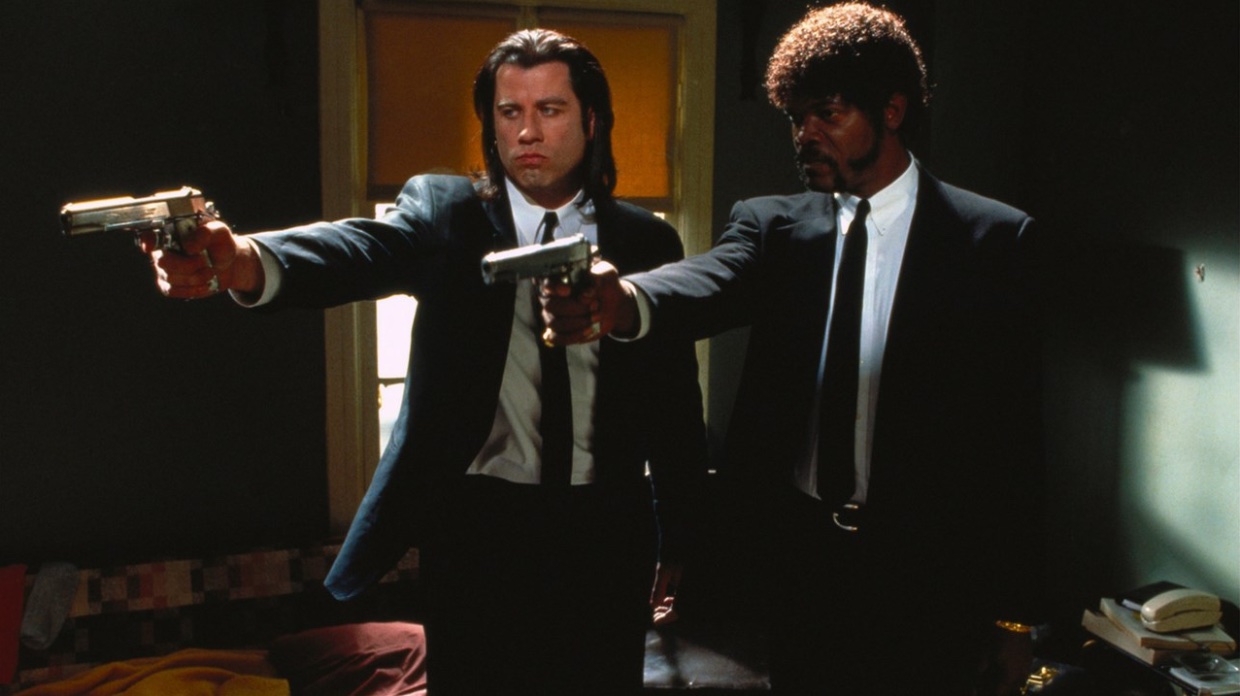 The cover of Filmmaker‘s seventh issue was Quentin Tarantino’s Pulp Fiction, considered here in this original essay by Geoffrey O’Brien that unpacks the film’s genre literature influences. In the lead-up to Tarantino’s Once Upon a Time in… Hollywood, it’s being posted online for the first time. — Editor

The two dictionary definitions of “pulp” which Quentin Tarantino posts at the beginning of Pulp Fiction both have a direct bearing on what follows. The first, “a soft, moist, shapeless mass of matter,” recalling as it does the phrase “beat to a pulp,” invokes from the outset those catastrophes of the flesh which are never far away at any moment in the film’s two-and-a-half-hour running time. Physical risk, the possibility of being damaged severely (perhaps irrevocably) by gun, fist, sword, chain, or hypodermic needle, by falling off a roof or crashing a car: these are not so much plot elements as the medium in which Pulp Fiction’s inhabitants draw their breath, the background—so omnipresent as to be taken for granted—against which they pursue their endless jags of more or less amiable small talk. The first definition serves almost as a warning of some of the material dangers that await, an appropriate gesture for a movie that ultimately gets comic mileage out of the removal of bits of the brain and bone, remnants of an exploded head, from the back seat of a car.

Through all the blood and injured body parts, Tarantino suggests that everything is going to be all right, even if he says it somewhat in the manner of a hold-up man pointing a gun at someone’s head. That trope—the man of violence as the voice of reason urging calm—becomes literal in the final sequence, in which the principle of “nobody move, nobody gets hurt” is carried to its logical extreme in a tableau-like stand-off, with a gun aimed at every head, that out-Woos John Woo himself. “What is Fonzie?” asks the gunman (Sam Jackson) of Amanda Plummer, who is dangerously close to a lethal tantrum, in order to break her concentration by eliciting the rote response: cool. Fonzie was cool.

They are all cool: Tarantino may set up a demonic universe, but not for him are the demonic emotions that might be expected to suffuse it. There are two states of being, fear when danger threatens, affectless relaxation at other times: more or less the contrast between adrenaline and heroin (both of which play a role in the movie’s most indelible sequence, Uma Thurman’s overdose and its comic-horrific aftermath). The old-time noir passions, the brooding melancholy and operatic death scenes, would be altogether out of place in the crisp and brightly lit wonderland that Tarantino conjures up. Neither a neo-noir or a parody of noir, Pulp Fiction is more of a guided tour of an infernal theme park decorated with cultural detritus, Buddy Holly and Mamie Van Doren, fragments of blaxploitation and Roger Corman and Shogun Assassin, music out of a 24-hour oldies station for which all the decades since the ‘50s exist simultaneously.

The second definition—”a publication, such as a magazine or book, containing lurid subject matter”—appears to announce some kind of homage or pastiche, and Tarantino has remarked that his original intention was “to do a Black Mask movie—like that old detective story magazine.” But, as he acknowledges, “it kind of went somewhere else.” Each of the movie’s curiously linked episodes, in fact, kind of goes somewhere else. If Reservoir Dogs could to a certain degree be seen as a reshuffling of previously existing movie bits, Pulp Fiction enlists its recognizable elements in a superstructure of considerable originality: the order of difference between the two is roughly that between Once Upon a Time in the West and A Fistful of Dollars.

The end result is indeed far from the hardboiled detective stories of Dashiell Hammett, Raymond Chandler, or Paul Cain (the stars of Black Mask’s lineup). It does however connect rather powerfully to a parallel pulp tradition, the tales of terror and the uncanny practiced by such writers as Cornell Woolrich, Frederic Brown, Robert Bloch, Charles Beaumont, and Richard Matheson, with their diabolical tricks of fate and wrenching twist endings, a tradition that led (via Beaumont and Matheson) into the cheap but enduring thrills of The Twilight Zone (whose theme music as interpreted by the Marketts is very aptly interpolated into Pulp Fiction’s time-warp soundtrack alongside Link Wray, Dick Dale, Al Green and Dusty Springfield).

Cornell Woolrich and Frederic Brown were writers who mined the gray zone between supernatural or (in Brown’s case) extraterrestrial horror on the one hand and criminal violence and madness on the other: Woolrich with the humorless intensity of the true paranoid, Brown with a sort of spaced-out whimsy that might have sprung from the brain of an alcoholic reporter steeped in chess and Lewis Carroll. Both dealt heavily in the realm of improbable coincidences and cruel cosmic jokes, which Pulp Fiction makes its own.

Just how deeply Woolrich’s I-can’t-believe-this-is-happening-to-me vision has permeated noir mythology is evident from a partial list of the films based on his work, including Rear Window, The Leopard Man, The Bride Wore Black, Mississippi Mermaid, The Night Has a Thousand Eyes, Phantom Lady, I Married a Shadow, and Maxwell Shane’s poetic quickie, Fear in the Night (1947). Brown’s work has not been fortunate—only Gerald Oswald’s inimitably sleazy Anita Ekberg vehicle, Screaming Mimi, springs to mind—but the diabolically engineered plot twists of his novels The Far Cry (1951), The Wench is Dead (1955), The Murderers (1961), and his masterpiece, Knock Three-One-Two (1951), show a clear affinity with the crisscrossing and recursive narrative lines in Pulp Fiction.

Tarantino does not exactly dabble in the supernatural, but he bends space and time in ingenious ways and goes so far as to broach the possibility of divine intervention. Horror movies provide a constant reference point—Uma Thurman’s eleventh-hour resurrection might have been lifted from The Evil Dead, and the sadists into whose clutches Bruce Willis falls have in their arsenal a chainsaw that would have done Tobe Hooper proud. In any event, we are clued early on that we have entered a fantastic world when—in a visual gimmick worthy of Frank Tashlin—the hand gesture by which Uma Thurman signs the squareness she hopes John Travolta will avoid is transformed momentarily into a glittering rectangle.

The twist endings of Woolrich and Brown tended to have the effect of a trap snapping shut: the door slams and there’s no way out, the nightmare turns out to be real, the hope of rescue is revealed as a optical illusion. The irony of Tarantino’s creation is that its twist endings are all upbeat, in each case re-routing a descent into living hell toward an unexpectedly happy ending. If Pulp Fiction is not quite “the feel-good movie of the year,” it nonetheless imparts a kind of sweet relief, the relief a hostage might feel at being permitted to live another day.

The comedy—and for most of its length the movie consists of little but comedy—is charged with the sense that “it didn’t hurt as much as I thought it would,” or alternatively, “we’ve still got time to joke around before it starts hurting.” It’s the banter of two hit men killing time between hits with a free-floating dialogue involving Samoans, foot massage, and the French term for “quarterpounder-with-cheese.”

Tarantino’s vein of chat is steeped in all the speech that came before, in the words of Jim Thompson’s schizoid con artists, Charles Willeford’s blandly reassuring sociopaths, the laconic schemers in the Parker novels of Richard Stark (aka Donald Westlake), David Mamet’s hustlers, in the poker-faced give-and-take of Budd Boetticher’s Randolph Scott westerns and Don Siegel movies like The Line-Up and The Killers, and about all in the free associating riffs of Elmore Leonard’s assorted misfits and bandits, the variously wily and demented thieves and assassins who populate Fifty-Two Pickup, Swag, The Switch, or City Primeval.

Like Leonard, Tarantino works by ear, letting the narrative shape itself around speech rhythms, as if there were all the time in the world for the circular, repetitive exchanges to play themselves out, as if the flow of talk could by itself keep annihilation at bay. Or, as John Travolta interjects with exquisitely modulated blankness: “Personality goes a long way.” At Pulp Fiction‘s most violently menacing moments, words prove more effective than hardware, from the rapid deal that Bruce Willis cuts with a gangster that he has rescued from Sam Jackson’s protracted monologue during the final hold-up.

It becomes music, the music of storytelling which was what pulp fiction was always about in the first place. From Hammett to Woolrich, from Frederic Brown to Elmore Leonard, the old hands worked to set lengths and obligatory climaxes, with the plot twists falling into place as emphatically as background music scored by Miklos Rozsa or Alex North. Tarantino has absorbed all that but takes it into a new moment in which different constraints operate, where space feels more wide open and pay-offs are less assured. But it’s still just as dangerous: it’s always dangerous out there.